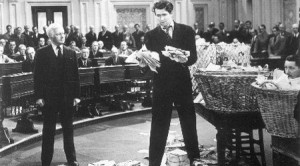 Harry Reid is poised to end the filibuster against executive-branch appointments and judicial nominations. Could Democrats back out at the last minute, as they have so many times before? Absolutely. But there’ve been three big changes in Senate Democrats’ outlook since the last time filibuster reform failed.

But gun control died in the Senate. And it turned out that Boehner refused to consider the Senate’s immigration legislation regardless of the filibuster’s status. Now, with President Obama’s political capital at a nadir, it’s clear that there’s no second-term agenda to protect in the near future, and they’re may not even be a Democratic Senate majority after 2014.

2. Democrats believe Republicans will shred the filibuster as soon as they get a chance. The main reason filibuster reform typically fails is that the majority party is scared of what will happen when the minority party gets into power. But Senate Democrats just watched Republicans mount a suicide mission to shut down the government. Their confidence that Republicans will treat the upper chamber’s rules with reverence is low, to say the least.

This has led to some fatalistic thinking about filibuster reform: If Republicans are going to blow the filibuster up anyway, Democrats might as well take the first step and get some judges out of the deal.

3. Senate Democrats feel betrayed by Republicans. It’s hard to overstate the pride senior Senate Democrats took in cutting their January deal with Senate Republicans. That kind of good-faith dealmaking, they said, was exactly how the Senate is supposed to work. Some even argued it was a sign that immigration reform, gun control, and other top Democratic initiatives might pass.

But then Republicans filibustered more judges and executive-branch nominees. And the pride top Democrats took in their deal to avert filibuster reform has turned to anger that Republicans made them look like trusting fools. “Just talked to at least 10 Senate Dems about filibuster reform, including some who previously opposed it,” tweets the Huffington Post’s Jennifer Bendery. “Just one opposes now.”