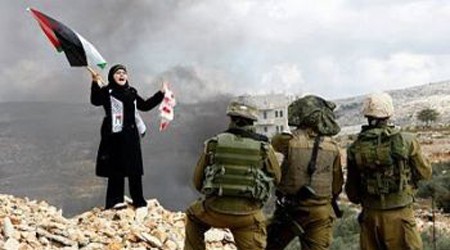 Large-scale protests against the ongoing blockade and bombardment of the Gaza Strip are expected to continue and grow across the occupied West Bank on Friday, a day after at least two Palestinians were killed during an enormous demonstration outside Jerusalem on Thursday night.

At least two people were killed and many injured last evening as tens of thousands of Palestinians marched from the city of Ramallah in the occupied West Bank to a security checkpoint outside Jerusulem in what many interpret as the signaling point that a possibleThird Intifada—or uprising—has now officially begun.

Political leaders and members of Palestinian civil society have called for nonviolent marches against the Israeli government’s continued policies of subjugation in both the West Bank and Gaza.

Thursday’s march—a show of opposition and protest against the ongoing assault on the Gaza Strip which has claimed more than 800 Palestinian lives since July 8—was met with heavy resistance from Israeli security forces who fired on the ground as they massed in the area outside the checkpoint.

“In the West Bank, we need to take our resistance efforts to a higher level,” Na’el Halabi, a student at Birzeit University who participated in the march, told Al Jazeera in Ramallah. “Gaza is not alone: we are part of the same struggle.”

As The Middle East Eye reports:

While people across Palestine gathered in celebration of Layla Al Qadder, or night of destiny, the enormous turnouts were fueled by the quickly rising death tolls in Gaza. Depending on the source, anywhere between 30,000 to 50,000 people joined in Ramallah’s march. Most media sources agree the protests were the biggest since the second intifada in 2005, although some say they could even be as big as the protests during the first intifada in 1987.

Alaa Jadaa, a Ramallah resident of who attended the Thursday demonstration, said he was sure that we are now seeing the start of the third intifada.

“The protest began at al-Manara [Ramallah’s city center] and we marched to Qalandiya Checkpoint, I am sure people will look back and say the third intifada was started in Gaza first and then look at us in Qalandiya,” Jadaa told Middle East Eye.

“I think this is going to be a massive intifada actually. It was really crazy last night, there was a guy from Barcelona who asked me if I had ever seen a demonstration like this and I said not for years. But still, this one is bigger than I have ever seen.”

As the crowds began to gather, they chanted anti-Israel and pro-Gaza slogans. Quickly all the protesters were packed together and there was little room to move. A relatively small group of some 200 Palestinians toward the front of the protests began throwing rocks, molotov cocktails and fireworks. It wasn’t long before things turned bloody and the Israeli military at the Qalandiya checkpoint responded by firing live ammunition and tear gas.

While it was easy to spot the 200 or so rock-throwers, people in the bulk of the otherwise peaceful crowd claim they were also hit in the exchange.

Speaking with Chris Hayes on MSNBC Thursday night, Dr. Mustafa Barghouti, one of the founders of the Palestinian National Initiative party, said people should not mistake the word ‘intifada’ or what they see in the West Bank with military action.

“The whole West Bank is boiling,” said Barghouti, but added he was hopeful that the protests on the Palestinian side would remain guided by a “popular nonviolent approach”.

Asked by Hayes if he was worried about escalating confrontations, Barghouti responded: “Of course I worry. But the main reason for this escalation is the fact that we are talking about 800 people massacred in Gaza—mostly children and women —and 5,300 injured of whom 90% are women, children and civilians.”

“You know I’ve advocated nonviolence all my,” he continued, “and each time I meet someone from the West they will tell me, ‘We would like to see you march with thousands of people. Your demonstrations are not that big.’ Today, that dream happened. It was like a Martin Luther King march or a Gandhi march. And we had more than twenty-five thousand people marching—women, men, elderly people, even some children—and it was so peaceful. And then were encountered with violence by the Israeli Army. I think the Israeli government is losing its mind completely, because tomorrow—on Friday—you will see the whole West Bank demonstrating. It is like a full uprising now. And that can be stopped only if this madness in Gaza is stopped.”

Employing the arabic word intifada, translated as uprising, Hayes asked Barghouti directly if “what we are seeing is the beginning of a Third Intifada?”

Barghouti replied, “Of course, it has started.”