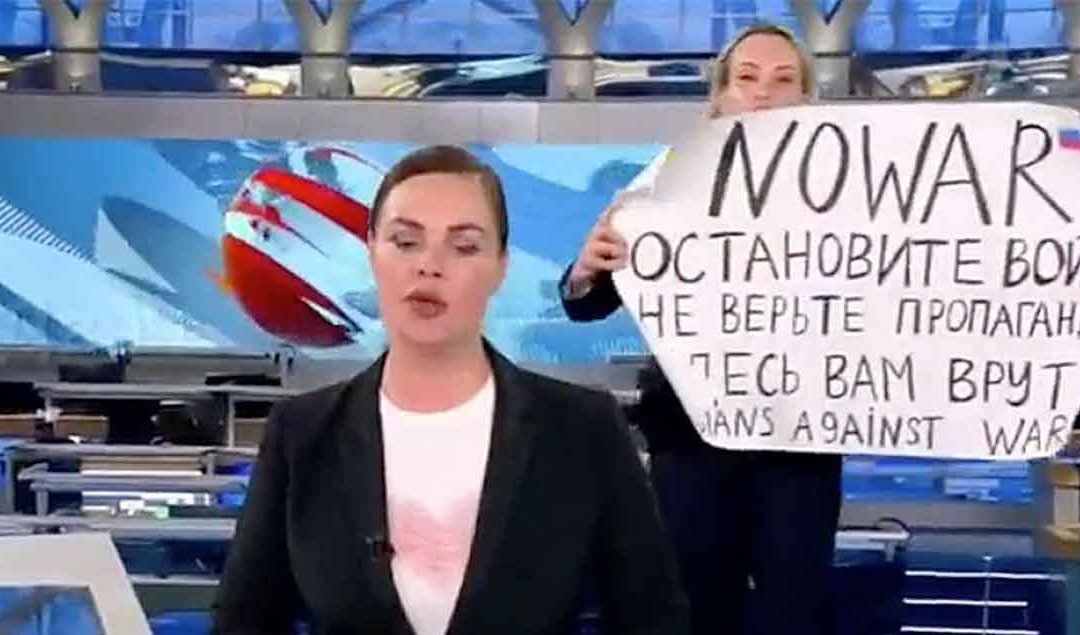 “It’s in our power alone to stop this madness,” the demonstrator, Channel One editor Marina Ovsyannikova, says in a pre-recorded video. “Go protest. Don’t be afraid of anything. They can’t put us all in prison.”

A Russian news editor is reportedly in police custody Monday after staging a daring protest against media misinformation about President Vladimir Putin’s invasion of Ukraine during a live television news broadcast.

Marina Ovsyannikova, an editor at state-owned Channel One, interrupted the network’s evening newscast shouting: “Stop the war! No to war!” while holding up a sign reading: “No War. Don’t believe propaganda. They’re lying to you. Russians against war.”

According to multiple reports, Ovsyannikova was arrested following her demonstration.

A woman burst onto Russia’s main live evening newscast today with a sign that says:

And chanting: “Stop the war! No to war!”pic.twitter.com/pKVKZFVEM3

Ovsyannikova also published an apparently pre-recorded video plea for peace. According to a translation by Financial Times Moscow bureau chief Max Seddon, the editor—who is wearing a beaded necklace in the colors of the Ukrainian and Russian flags—says that “what’s happening in Ukraine is a crime, and Russia is the aggressor. The responsibility for this aggression lies with one man: Vladimir Putin.”

“My father is Ukrainian, my mother is Russian, and they were never enemies,” she says. “This necklace [shows] Russia must stop this fratricidal war.”

“Unfortunately, for the last few years I’ve been working for Channel One,” Ovsyannikova continues. “I’ve been doing Kremlin propaganda and I’m very ashamed of it—that I let people lie from TV screens and allowed the Russian people to be zombified.”

“We didn’t say anything in 2014 when it only just began. We didn’t protest when the Kremlin poisoned Navalny,” she adds, referring to the Russian invasion of Crimea and alleged attempted assassination of imprisoned opposition leader Alexei Navalny.

Marina Ovsyannikova, the woman who ran onto a live state TV news broadcast, even recorded a message beforehand. In it, she says her father is Ukrainian. She calls for anti-war protests, says she’s ashamed about working for Kremlin propaganda, and she denounces the war absolutely. pic.twitter.com/nOpUY9bH74

“We just silently watched this inhuman regime,”  Ovsyannikova says. “Now the whole world has turned away from us, and 10 generations of our descendants won’t wash off this fratricidal war.”

“We Russians are thinking and intelligent people,” she concludes. “It’s in our power alone to stop this madness. Go protest. Don’t be afraid of anything. They can’t put us all in prison.”

Press freedom advocates have condemned the Russian government for its total crackdown on media dissent.

According to Russian journalist and Nobel Peace Prize recipient Dmitry Muratov, news outlets were issued an edict prohibiting the use of words including “war,” “invasion,” and “occupation.” The Duma, or Russian parliament, subsequently passed a law punishing what it called “fake” news about the invasion of Ukraine with as many as 15 years behind bars.