Robert Scheer: They Know Everything About You 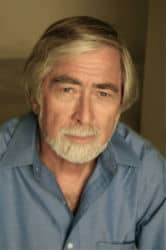 “This is what journalism looks like, provided by one of the greatest reporters of our times.” Robert McChesney

Copies of Robert Scheer’s new book, “They Know Everything About You”, will be available for purchase and signing 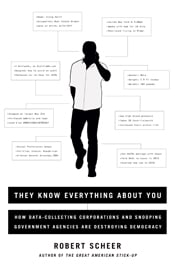 In the first week of June 2013, the American people discovered that for a decade, they had abjectly traded their individual privacy for the chimera of national security. The revelation that the federal government has full access to all phone records and the vast trove of presumably private personal data posted on the Internet has brought the threat of a surveillance society to the fore.

But the erosion of privacy rights extends far beyond big government. Big business has long played a leading role in the hollowing out of personal freedoms. In THEY KNOW EVERYTHING ABOUT YOU, Robert Scheer shows how our most intimate habits, from private correspondence, book pages read, and lists of friends and phone conversations have been seamlessly combined in order to create a detailed map of an individual’s social and biological DNA.

From wiretapping to lax social media security, from domestic spy drones to sophisticated biometrics, both the United States government and private corporate interests have dangerously undermined the delicate balance between national security and individual sovereignty.

Without privacy, Scheer argues, there is neither freedom nor democracy. The freedom to be left alone embodies the most basic of human rights. Yet this freedom has been squandered in the name of national security and consumer convenience.

WE MUST CHALLENGE THE ASSUMPTION that protecting national security requires sacrificing the constitutional rights of the individual. The technology of surveillance, Scheer warns, represents an existential threat to the liberation of the human spirit. 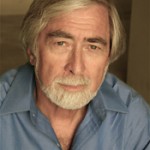 Robert Scheer, former national affairs correspondent and columnist for the Los Angeles Times, is the editor-in-chief of the Webby Award-winning online magazine Truthdig and professor at the University of Southern California’s Annenberg School for Communication and Journalism. Scheer is also a co-host of the weekly political radio program “Left, Right & Center” on KCRW, the National Public Radio affiliate in Santa Monica, California. He is the author, most recently, of The Pornography of Power and The Great American Stickup. 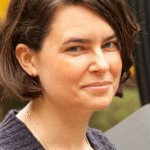 Aleecia M. McDonald is a Non-Resident Fellow at Stanford’s Center for Internet & Society. Her research focuses on the public policy issues of Internet privacy, and includes user expectations for Do Not Track, behavioral economics and mental models of privacy, and the efficacy of industry self regulation. She co-chaired, and remains active in, the WC3’s Tracking Protection Working Group. Aleecia’s decade of experience working in software startups adds a practical focus to her academic work. She holds a PhD in Engineering & Public Policy from Carnegie Mellon where she studied online privacy. Her findings have been featured in media outlets such as the Washington Post and Ars Technica. 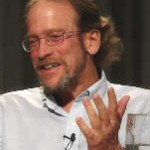 Paul George has been the Director of Peninsula Peace and Justice Center for 25 years and has been a grassroots peace and human rights organizer and activist his entire adult life. Paul has worked as a political organizer for the largest health care workers union in the western US and as a solidarity activist, which led to extensive travels in war-torn El Salvador and Nicaragua. He is the host of the award-winning Other Voices TV program and was a community radio talk show host for nearly a decade. He is a popular public speaker, addressing a wide range of issues.

Praise for “They Know Everything About You”

“Even readers familiar with Edward Snowden’s revelations about the scope of the NSA’s gathering of personal information will find that Scheer powerfully connects the dots of our chilling Orwellian present, one in which privacy is considered a luxury, rather than a right.”–Publishers Weekly

“Truthdig Editor-in-Chief Scheer examines how online convenience has supplanted bedrock American values of personal freedom and the right to privacy…Scheer provides more than enough solid journalism to show that the digital dirt is knee-deep and getting deeper.”–Kirkus Reviews

“Robert Scheer reminds us that privacy is everything—the protector of our liberty, the guarantor of our personal autonomy, the fountainhead of our democracy—and yet it’s disappearing faster than an electronic blip moving at warp speed from your computer to the NSA. With clarity and precision, Scheer dissects the military-intelligence complex, showing it to be neither very secure nor very intelligent, but, rather, dangerous to us all.”
—Robert B. Reich, Chancellor’s Professor of Public Policy, University of California at Berkeley

“They Know Everything About You is a brilliant book. Robert Scheer, who covered my 1971 trial after I released the Pentagon Papers, has been following privacy and surveillance issues for decades. He is a key voice and his book— cogent, timely, and fascinating—is an indispensable text for our time.”

—Daniel Ellsberg, author of Secrets: A Memoir of Vietnam and the Pentagon Papers

“Robert Scheer has undertaken a penetrating examination of Americans’ disappearing privacy and issued a clarion call in these pages, lest we unwittingly click-away our freedom.”
—John W. Dean, bestselling author and former Nixon White House counsel

“Scheer is one of the most important journalists in America. He is not only brilliant, possessed by a fierce and uncompromising integrity, but is a lyrical and often moving writer. All of these talents are on full display in his latest book about the rise of the security and surveillance state and the terrifying dystopia that will be visited upon us all unless our right to privacy is returned to us.”
—Chris Hedges, fellow at The Nation Institute and coauthor of Days of Destruction, Days of Revolt

“This is what journalism looks like, provided by one of the greatest reporters of our times. Scheer has written a powerful indictment of the present-day corporate-government surveillance regime that has effectively eliminated the right to privacy. Like a master surgeon, he dissects the self-serving rationales for the wholesale illegal spying on Americans and shows them to be nonsense.”
—Robert W. McChesney, author of Blowing the Roof Off the Twenty-First Century