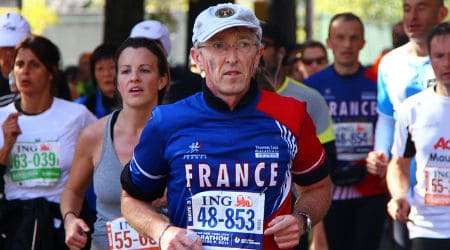 By Bill McKibben
The Guardian

With the climate talks in Paris now over, the world has set itself a serious goal: limit temperature rise to 1.5C. Or failing that, 2C. Hitting those targets is absolutely necessary: even the one-degree rise that we’ve already seen is wreaking havoc on everything from ice caps to ocean chemistry. But meeting it won’t be easy, given that we’re currently on track for between 4C and 5C. Our only hope is to decisively pick up the pace.

In fact, pace is now the key word for climate. Not where we’re going, but how fast we’re going there. Pace – velocity, speed, rate, momentum, tempo. That’s what matters from here on in. We know where we’re going now; no one can doubt that the fossil fuel age has finally begun to wane, and that the sun is now shining on, well, solar. But the question, the only important question, is: how fast.

To put it in slightly more familiar terms, think about deciding that you’re going to run a marathon. Any healthy person can learn to do it as long as they set a very relaxed pace – in fact, there’s a whole club of people who just happily run slowly. Their leader, John Bingham, may be the most popular running writer of our time, with books like No Need for Speed and Marathoning for Mortals. The average finishing time for theLos Angeles marathon: five hours and 15 minutes.

But in the case of the climate talks, that’s not what we’re talking about. We’re talking about going fast. Limiting the temperature increase to 1.5C would be like setting a new world record (which is two hours and two minutes); even managing to hold it to 2C would be like running a marathon way under three hours, something only 2% of marathoners ever accomplish. “Running a marathon is hard,” running writer Mark Remy has written. “Doing it in less than three hours is really hard. No, I mean hard. Like really freaking hard.”

Translated into carbon terms: you don’t get to go drilling or mining in new areas, even if you think it might make you lots of money. The Arctic will have to be completely off limits, as will the Powder River Basin of Montana and Wyoming. The pre-salt formations off Brazil, and the oil off the coasts of north America too.

You’ve got to stop fracking right away (in fact, that may be the greatest imperative of all, since methane gas does its climate damage so fast). You have to start installing solar panels and windmills at a breakneck pace – and all over the world. The huge subsidies doled out to fossil fuel have to end yesterday, and the huge subsidies to renewable energy had better begin tomorrow. You have to raise the price of carbon steeply and quickly, so everyone gets a clear signal to get off of it.

At the moment the world has no real plan to do any of those things. It continues to pretend that merely setting the goal has been work enough for the last two decades. Its “training plan” – the text that negotiators agreed on in Paris – is a go-slow regimen that aims for a world 3.5C warmer. Its governments are still listening mostly to the fossil fuel industry, which is the coaching equivalent of Bingham. No Need for Speed could be Exxon’s guiding mantra; their analysts have repeatedly told the world that renewables simply can’t play a big role until the middle of the century, for instance. If their political might can make that a self-fulfilling prophecy, then we’ve got no chance at all of hitting any of the targets.

Or here’s a case in point: the Obama administration, even as it negotiated the new climate agreement, is flirting with lifting the longstanding ban on oil exports, which would be the equivalent of opening a hundred-odd new coal-fired power plants and operating them for a year. They don’t seem to quite get it: from this point on, if you’re even slightly serious about meeting these targets, you have to do everything possible. There’s no more compromises or trade-offs that can be made. You’re no longer negotiating with a bunch of other countries around a conference table. You’re negotiating with physics, and physics holds all the good cards.

The world’s fossil fuel companies still have five times the carbon we can burn and have any hope of meeting even the 2C target – and they’re still determined to burn it. The Koch Brothers will spend $900m on this year’s American elections. As we know from the ongoing Exxon scandal, there’s every reason to think that this industry will lie at every turn in an effort to hold on to their power – they’re clearly willing to break the planet if it means five or perhaps 10 more years of business as usual for them.

So there’s no reason to go home from Paris complacent, or even all that optimistic. Left to its own devices, the world is still planning to spend the next decade or two mostly limbering up, engaging in the kind of impressive-looking stretching that runners enjoy at the start line. Meanwhile flood, drought, melt, and more of it all the time. In the past week we’ve seen people die in record rains from south India to the Lake District of Britain, from thePacific Northwest of America to the mountains of Norway.

But the powers that be won’t be left to their own devices. Think of the ever-growing climate movement as personal trainers – for the next few years our job is to yell and scream at governments everywhere to get up off the couch, to put down the chips, to run faster faster faster. We’ll fan out around the world in May to the sites of all the world’s carbon bombs; we’ll go to jail if we have to. We’ll push. And if “personal trainer” doesn’t sound fierce enough, then think of us as a pack of wolves. Exxon, we’re on your heels. America, China, India – that’s us, getting closer all the time. You need speed. It’s our only chance.