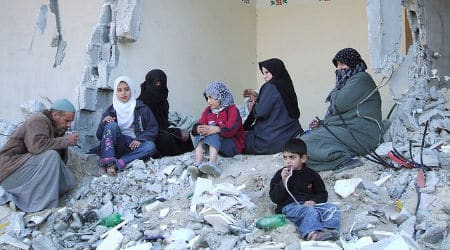 By Chris Gunness
The Guardian

Baby Salma died of hypothermia at just 40 days old. Her body was drenched with freezing rainwater. It was frozen “like ice-cream”. Gaza was hit by a severe winter storm called “Huda” in January. Salma was its youngest victim.

I meet Salma’s mother, Mirvat, and 14 members of her extended family in the very place, indeed the room, where Salma slept during her last night at home. They still live there in Beit Hanoun, northern Gaza, in a tiny three-room wooden structure, covered with plastic. When I see it from the road, I assume it houses animals. The door is a blanket which flaps in the biting wind. It is raining. Water flows in. Mirvat pulls back the sodden carpet that serves as flooring and scoops the wet sand below. Memories of Salma’s death on 9 January are painfully fresh.

“The night she died the storm was strong. We were all soaking wet, but some of us managed to sleep. The rain came and in and drenched Salma’s blankets. I found her shaking. Her tiny body was frozen like ice-cream. We took her to hospital, but later the doctor called. Salma was dead. My beautiful girl weighed 3.1kg at birth. She was healthy and would be alive today if we had not been bombed out of our home in the war and reduced to living like this.”

During the Gaza conflict last summer,  Mirvat, her husband and four children lived in a complex of five simple buildings with their 40-member extended family, just one kilometre from the barrier between Gaza and Israel. Her father-in-law, Jibril, knew that life on the frontline was unsustainable.

“There was a smell of death in the air. The children were traumatised and couldn’t sleep,” he tells me. “After a week of fighting we fled as the bombs fell around us, terrified for our lives. We went to my brother’s house, but that became too dangerous, so we took refuge in a hospital. After an hour, that was hit, so we ran to the shelter of an UNRWA [United Nations Relief and Works Agency] school. There were thousands of us living in a school built for one thousand students. So after the war we came here.”

The family tragedy does not end with Salma. Her sister Maes, aged three, is in hospital suffering from respiratory problems brought on by exposure to harsh weather. “I worry that Maes will die like Salma,” says Mirvat.

Outside, I meet Mirvat’s sister-in-law, Nisreen, 28. Her son died at just 50 days old in the UNRWA school where the family had taken refuge. “Moemen’s death was unexpected. There was nothing anyone could do to save him. I felt that he was cold. I covered him up and I put him to sleep. The child was sleeping in my lap. When I woke up at four in the morning he was blue. Moemen was dead. I have waited for a boy for five years, and now he’s gone.”

Jibril is an extraordinary grandfather, even by Gazan standards. Two of the four children killed by hypothermia in Gaza in recent weeks were his grandchildren. He says the war has robbed him of his past and his future. “My home lies in ruins, flattened. I worked hard for over 40 years as a farmer. I provided for my family. But in a matter of hours it was all lost. I had a piece of farmland that they destroyed. We planted lemon trees on it 17 years ago, but tanks bulldozed it.”

Jibril is an entrepreneurial man deliberately reduced to destitution. “My son has a donkey and earns five to 10 shekels a day [£1 to £2] transporting rocks to support all of us. We live mainly on hubeyza [a wild grass eaten like spinach] which we can pick in the streets.”

And whom does he blame for the untimely death of his grandchildren? “The international donor community killed those babies,” he tells me. “They have pledged billions. But where is it? We need a home, not promises. UNRWA has no money. What can they do without financial support?”

Jibril is correct. UNRWA, the agency for which I work, was forced to suspend what for this family would have been a life-saving programme just three weeks ago. After the conference in Cairo last October at which donors pledged $5.4bn to rebuild Gaza, we created a $720m project. With the generous pledges at Cairo we were certain the funds would be there. Or so we thought. With this money, we aimed to give rental subsidies to people whose homes were uninhabitable. We hoped to give cash so people could repair and rebuild their houses. But the billions pledged did not materialise and the programme was left with a shortfall of nearly $600m.

The day after we announced suspension of the cash assistance, anger boiled over. The office in Gaza of the UN special co-ordinator for the Middle East peace process was attacked. The threat of violence remains. You can feel it in the air, just like last summer.

Certainly the need is great and the sense of desperation is palpable and profound. We estimate that approximately 100,000 housing units were damaged or completely destroyed, affecting hundreds of thousands of people. Many of those with homes that are habitable have found themselves on water and electricity grids that are dysfunctional.

Rebuilding Gaza physically is only part of the story. If Salma and Moemen had lived, what future would they have had? The next generation in Gaza is traumatised, shocked, brutalised. The recreational spaces where they play are littered with some 8,000 pieces of unexploded ordnance.

The UN estimates that some 540 children were killed in the conflict, many in their own homes. UNRWA could not provide safe sanctuary. Our schools took direct hits on seven occasions. Children died in and around classrooms and playgrounds under the blue UN flag. Almost every child in Gaza has a family member or friend who was killed, injured or maimed for life, often before their eyes. One thousand of the 3,000 children injured in the conflict are likely to have physical disabilities for the rest of their lives. Had Salma and Moemen lived to adulthood, they would have entered a job market with an unemployment rate which hit an unprecedented 47% in the third quarter of last year. Average power blackouts are 18 hours a day. Around 90% of all water in Gaza is undrinkable.

Gaza is not a natural disaster. It is man-made, the result of deliberate political choices. Different choices must now be made. What is the point of rebuilding a place while condemning its population to the indignities of aid dependency?

The situation teeters on the brink of another major crisis, with worrying implications for Palestinians and Israelis. Funding for humanitarian operations is urgently needed, but such assistance will only mitigate the worst impacts of the crisis.

People in Gaza need urgent change: they need all parties to the conflict to abide by their obligations under international law; the removal by Israel of all obstacles to the enjoyment of human rights; and the immediate lifting of the blockade, allowing imports and exports, a necessary step to enabling economic recovery.

The rockets fired from Gaza must cease. There is an urgent need for Palestinian unity, so that the Palestinian Government of National Consensus can assume its governance and security functions in Gaza. The Middle East Quartet should exert effective political pressures, as the time for humanitarian action alone is long past.

I urge donors to translate their pledges at the Cairo conference into actual disbursements, and for the international community to promote and demand compliance with international law. Most importantly, parties to the conflict have obligations to protect civilians. Those found guilty of violations should be held accountable and brought to justice.

Another major crisis can be averted. If we mobilise the political, financial and moral resources to break out of the deadlock, we can give Gaza back its future. It is too late for baby Salma and Moemen, but it is not too late for the next generation, some 950,000 children they left behind.