An increasingly significant part of the population became aware of the fact that behind all the talk about miraculous economic growth, there was nothing in it for them. 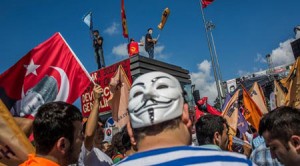 A lot has been written over the past week and a half by various social scientists, political analysts and journalists on what the uprising in Turkey is about. I want to contribute by commenting on what it’s not.

To start with the most obvious and overstated point, it’s not just about adozen sycamore trees. What started with a relatively small number of concerned activists and citizens organising a sit-in to avoid the destruction of the Gezi Park in the face of the government’s attempt to build a replica of an army barracks on the park site as part of an urban redevelopment project suddenly evolved into a spontaneous anti-government demonstration of a massive scale when the police resorted to extremely brutal force to dispel the few peaceful protesters.

Contrary to the picture drawn by a number of government officials since the beginning of the events, depicting it as the work of a few extremists or provocateurs encouraged by the opposition, it was not a product of political organising either by the so-called extremists or the Kemalist opposition to the ruling AKP. The spontaneity of the movement and its broad base (including many previously apolitical citizens, who all took to the streets as a result of the same reaction but lack a unified political goal), while not particularly its strong points, are undeniable facts that are obvious to anyone observing the situation with a clear and independent mind.

It’s also not just a secularist response to AKP’s persistent attempts to organise more and more aspects of social life around religion. While it would be a mistake to say that the ruling AKP is not using its parliamentary majority to this effect and that this isn’t a cause for real concern for a great many people among the protesters and the population, especially the urban professional classes; singling it out as the only or even the main issue would be missing the point that it conceals other conflicts that cut deeper into Turkish society.

This conflict is between proponents of fiercely neoliberal policies that promise high returns for capital and the great majority of the population for whom growth and development have only meant dispossession and loss of public spaces. To put it another way, this is a conflict between the supporters of Prime Minister Erdogan’s single-handed management of the political, economic and social life of the country a la Louis XIV, and those who have been victims of his rule, as in the case of over 700 students (according to the Initiative for Solidarity with Detained Students) and more than 50 journalists behind bars at the moment who have been charged under vague terrorism laws.

In fact, the secularist-conservative divide has been a sure agenda-changer, like when the bill introducing a number of restrictions on the consumption of alcohol such as prohibiting its sale after 10pm was passed a few weeks after the bombings in the town of Reyhanli on the Syrian border, and largely crowded out the discussions about the government’s foreign policy on Syria.

It’s not the first time even the slightest display of dissent against government policies has been met with extreme brutality and violence inTurkey. In fact, students, workers, Kurds, activists, and anyone else who dared to stand up against injustice are now used to it; but this is the first time the average apolitical Turk, a product of the military regime that came to power in a Pinochet style military coup in 1980, has experienced it first-hand. In 2011 two university students arrested during one of Erdogan’s speeches in 2010 for posting a banner demanding free education, after having spent 19 months in jail awaiting their trial, were sentenced to 8 years 5 months and 20 days in prison on various terrorism charges such as “membership of and propagandising for a terrorist organization” under the aforementioned terrorism laws.

Despite efforts by the Initiative for Solidarity with Detained Students (TODI) and various other groups to publicise these cases as much as possible, little has been achieved on this cause. It is one of the remarkable facts about Turkey that the strategy of violently suppressing dissents was effective for so long that repeated incidents like these haven’t sparked massive waves of unrest earlier, and it happened to be the police brutality against the initially small number of Gezi Park protesters that lit the flame.

The mass social unrest we are witnessing is not taking place despite the economic performance of the country; it is partially a result of the kind of economic policies embarked on by the government in the last 10 years.

Having come to power in 2002 on promises of economic stability in the wake of a devastating economic crisis the year before, the decade-long neoliberal AKP rule saw the creation of favourable conditions for capital accumulation, especially in sectors newly integrated into the sphere of accumulation such as healthcare, alongside stagnating real wages in virtually every sector of the economy. A decade was clearly long enough for an increasingly significant part of the population to become aware of the fact that behind all the talk about a miraculous economic growth, there was nothing in it for them. Under these circumstances of growing inequality in what was already a fairly unequal society, tales about how the country has finally managed to pay off all its debt to the International Monetary Fund (where it has just been replaced by a much greater resort to borrowing from other outside sources, nearly a third of which is now short-term) do not satisfy even those who fail to realise what that statement conceals.

Finally, the original military barracks that the government aims to rebuild on Gezi Park was not the “stronghold for the proto-Islamist insurrection against the Young Turks” in 1909 as some media like the Financial Times said. As reported in Turkish media, the original military barracks now trying to be rebuilt was constructed in the 19th century on the site of an Armenian cemetery, which was later seized by the state in the 1930s. It was demolished in 1939 by the republic and turned into Gezi Park. The building that played a part during the 1909 rebellion was a neighbouring army barracks, now the Faculty of Architecture of Istanbul Technical University.

The protests are still going on, and many ordinary Turks take pride in how it is a broad mass movement not drowned in party politics. Nevertheless, many such examples of self-organisation don’t last long or simply die out without any concrete gains in the absence of a unifying political project. The degree to which it will be successful in achieving any positive change will depend on the kind of political solutions it can bring to the true social conflicts Turkey faces.