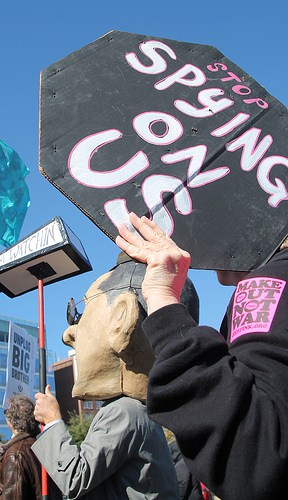 Demonstrators at a Stop Watching Us rally. (Photo: naomiwolf/cc/flickr)

A stunning new report compiles extensive evidence showing how some of the world’s largest corporations have partnered with private intelligence firms and government intelligence agencies to spy on activist and nonprofit groups. Environmental activism is a prominent though not exclusive focus of these activities.

The report by the Center for Corporate Policy (CCP) in Washington DC titledSpooky Business: CorporateEspionage against Nonprofit Organizations draws on a wide range of public record evidence, including lawsuits and journalistic investigations. It paints a disturbing picture of a global corporate espionage programme that is out of control, with possibly as much as one in four activists being private spies.
The report argues that a key precondition for corporate espionage is that the nonprofit in question:

“… impairs or at least threatens a company’s assets or image sufficiently.”

One of the groups that has been targeted the most, and by a range of different corporations, is Greenpeace. In the 1990s, Greenpeace was tracked by private security firm Beckett Brown International (BBI) on behalf of the world’s largest chlorine producer, Dow Chemical, due to the environmental organisation’s campaigning against the use of chlorine to manufacture paper and plastics. The spying included:

Other Greenpeace offices in France and Europe were hacked and spied on by French private intelligence firms at the behest of Électricité de France, the world’s largest operator of nuclear power plants, 85% owned by the French government.

Oil companies Shell and BP had also reportedly hired Hackluyt, a private investigative firm with “close links” to MI6, to infiltrate Greenpeace by planting an agent who “posed as a left -wing sympathiser and film maker.” His mission was to “betray plans of Greenpeace’s activities against oil giants,” including gathering “information about the movements of the motor vessel Greenpeace in the north Atlantic.”

The CCP report notes that:

Many of the world’s largest corporations and their trade associations – including the US Chamber of Commerce, Walmart, Monsanto, Bank of America, Dow Chemical, Kraft, Coca-Cola, Chevron, Burger King, McDonald’s, Shell, BP, BAE, Sasol, Brown & Williamson and E.ON – have been linked to espionage or planned espionage against nonprofit organizations, activists and whistleblowers.”

Exploring other examples of this activity, the report notes that in Ecuador, after a lawsuit against Texaco triggering a $9.5 billion fine for spilling 350 million gallons of oil around Lago Agrio, the private investigations firm Kroll tried to hire journalist Mary Cuddehe as a “corporate spy” for Chevron, to undermine studies of the environmental health effects of the spill.

Referring to the work of US investigative reporter Jeremy Scahill, the report points out that the notorious defence contractor Blackwater, later renamed XE Services and now Academi, had sought to become “the intel arm” of Monsanto, the agricultural and biotechnology corporation associated with genetically modified foods. Blackwater was paid to “provide operatives to infiltrate activist groups organizing against the multinational biotech firm.”

In another case, the UK’s Camp for Climate Action, which supports the decommissioning of coal-fired plants, was infiltrated by private security firm Vericola on behalf of three energy companies, E.ON, Scottish Power, and Scottish Resources Group.

Reviewing emails released by Wikileaks from the Texas-based private intelligence firm Stratfor, the report shows how the firm reportedly “conducted espionage against human rights, animal rights and environmental groups, on behalf of companies such as Coca-Cola.” In one case, the emails suggest that Stratfor investigated People for the Ethical Treatment of Animals (PETA) at Coca-Cola’s request, and had access to a classified FBI investigation on PETA.

The report uncovers compelling evidence that much corporate espionage is facilitated by government agencies, particularly the FBI. The CCP report examines a September 2010 document from the Office of the Inspector General in the US Justice Department, which reviewed FBI investigations between 2001 and 2006. It concluded that:

“… the factual basis of opening some of the investigations of individuals affiliated with the groups was factually weak… In some cases, we also found that the FBI extended the duration of investigations involving advocacy groups or their members without adequate basis…. In some cases, the FBI classified some of its investigations relating to nonviolent civil disobedience under its ‘Acts of Terrorism’ classification.”

For instance, on an FBI investigation of Greenpeace, the Justice Department found that:

“… the FBI articulated little or no basis for suspecting a violation of any federal criminal statute… the FBI’s opening EC [electronic communication] did not articulate any basis to suspect that they were planning any federal crimes….We also found that the FBI kept this investigation open for over 3 years, long past the corporate shareholder meetings that the subjects were supposedly planning to disrupt… We concluded that the investigation was kept open ‘beyond the point at which its underlying justification no longer existed,’ which was inconsistent with the FBI’s Manual of Investigative and Operational Guidelines (MIOG).”

The FBI’s involvement in corporate espionage has been institutionalised through ‘InfraGard’, “a little-known partnership between private industry, the FBI and the Department of Homeland Security.” The partnership involves the participation of “more than 23,000 representatives of private industry,” including 350 of the Fortune 500 companies.

But it’s not just the FBI. According to the new report, “active-duty CIA operatives are allowed to sell their expertise to the highest bidder”, a policy that gives “financial firms and hedge funds access to the nation’s top-level intelligence talent. Little is known about the CIA’s moonlighting policy, or which corporations have hired current CIA operatives.”

The report concludes that, due to an extreme lack of oversight, government effectively tends to simply “rubber stamp” such intelligence outsourcing:

“In effect, corporations are now able to replicate in miniature the services of a private CIA, employing active-duty and retired officers from intelligence and/or law enforcement. Lawlessness committed by this private intelligence and law enforcement capacity, which appears to enjoy near impunity, is a threat to democracy and the rule of law. In essence, corporations are now able to hire a private law enforcement capacity – which is barely constrained by legal and ethical norms – and use it to subvert or destroy civic groups. This greatly erodes the capacity of the civic sector to countervail the tremendous power of corporate and wealthy elites.”

“Corporate espionage against nonprofit organizations is an egregious abuse of corporate power that is subverting democracy. Who will rein in the forces of corporate lawlessness as they bear down upon nonprofit defenders of justice?”

That’s a good question. Ironically, many of the same companies spearheading the war on democracy are also at war with planet earth – just last week the Guardian revealed that 90 of some of the biggest corporations generate nearly two-thirds of greenhouse gas emissions and are thus overwhelmingly responsible for climate change.

Dr. Nafeez Ahmed is Executive Director of the Institute for Policy Research & Development and Chief Research Officer at Unitas Communications Ltd where he leads on geopolitical risk. His latest book is A User’s Guide to the Crisis of Civilization: And How to Save It (2010), which inspired the award-winning documentary feature film, The Crisis of Civilization (2011).