The US Supreme Court Also Has Blood on Its Hands 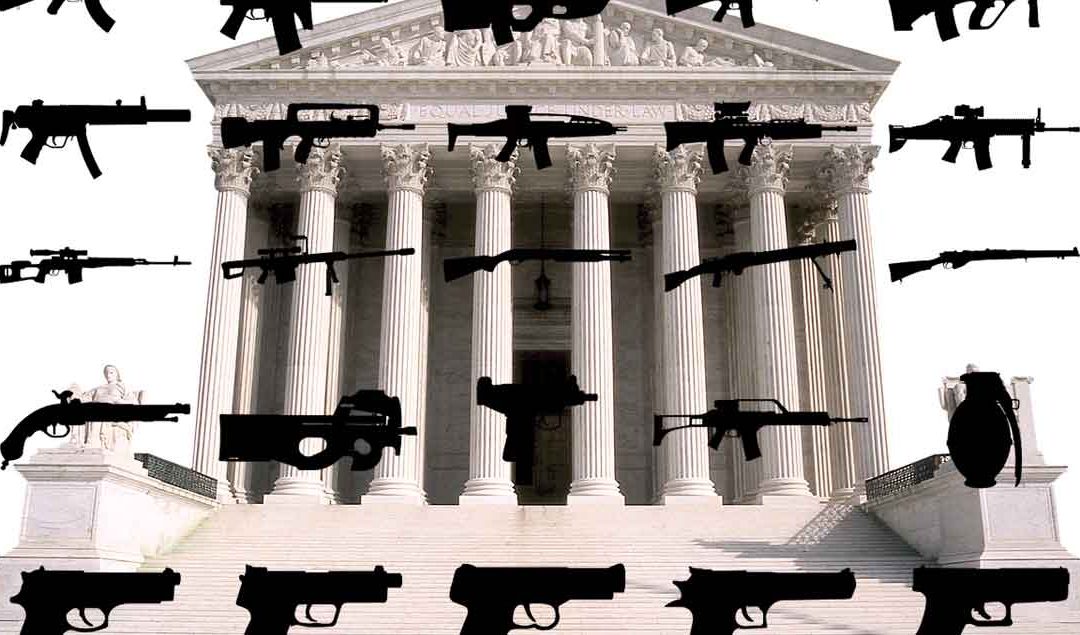 The court is about to take Second Amendment fundamentalism to a new and even more dangerous level.

If you’re looking for someone or something to blame for the mass shootings that have left our schools, streets and communities soaked in blood, don’t just point your finger at the deranged punks who pull the triggers, or the NRA and their lackeys in the Republican Party. Save at least some of your ire for the Supreme Court.

In 2008, the Supreme Court sold its soul to the gun lobby. In a 5-4 majority opinion written by the late Justice Antonin Scalia in District of Columbia v. Heller, the court held for the first time that the Second Amendment protects an individual right to own firearms.

Prior to Heller, the great weight of academic scholarship as well as the court’s 1939 decision in United States v. Miller had construed the Second Amendment, in keeping with the actual debates of the Constitutional Convention, as protecting gun ownership only in connection with service in long-since antiquated state militias.

In 2010, the court again genuflected to the gun lobby. In another 5-4 opinion in McDonald v. Chicago, this time written by Justice Samuel Alito, the court extended Heller, holding that the individual right to keep and bear arms is “incorporated” by the Fourteenth Amendment’s Due Process Clause and is therefore applicable to the states and local governments.

The Second Amendment, as interpreted by Scalia and Alito, thus became the law of the land. The amendment has since been elevated in rightwing circles to the status of holy writ.

Both Heller and McDonald were based on the implausible and perverse judicial philosophy known as “originalism.”

Originalism has led the court to enter a legal fantasy world in which the answers to contemporary questions about such matters as voting rights and gerrymandering, union organizing, the death penalty, abortion and gun control are to be found solely in the meaning that the Constitution had for the Founding Fathers in the late 18th Century. For originalists, the meaning of the Constitution is forever fixed, and can only be altered by constitutional amendments.

As a tool of judicial decision-making, originalism has been around a long time. One of its earliest expressions came in the Dred Scott case of 1857, perhaps the most odious decision ever issued by the Supreme Court, which held that Black Americans of African descent could never be U.S. Citizens. Plessy v. Ferguson, the 1896 decision that upheld the constitutionality of racial segregation even after the ratification of the 13th, 14th and 15th Amendments, is another originalist landmark.

But as an explicit judicial theory, originalism came into its own in the early 1980s. Initially, as popularized by Reagan-era Attorney General Ed Meese and the late failed-Supreme Court nominee Robert Bork, the doctrine asserted that the most important terms and provisions that appear in the Constitution and the Bill of Rights should be understood according to the “original intent” of the Founding Fathers, rather than as broad concepts that acquire depth, content and more complete meaning over time in response to changing social conditions.

When critics noted that the framers of the Constitution were a diverse group and that their actual intentions were varied and often ambiguous, proponents of the doctrine refined their approach. The current version—call it “new originalism”—focuses on the “original public meaning” of Constitutional provisions, which, they contend, can be ascertained from the recorded debates of the founding era and from such sources as late eighteenth-century dictionaries.

All originalists—whether of the old or new iteration—believe that their approach limits the subjectivity of judges and acts as a restraint on judicial activism.

In fact, originalism does nothing of the sort. As Fordham University history professor Saul Cornell, one of the foremost authorities on the history of the Second Amendment, noted in a scathing critique published in 2011 in Dissent magazine:

[I]f one looks carefully at the murky methodology and dubious practices of new originalism, it is clear that its historical foundations are even shakier than that of old originalism. The new theory is little more than an intellectual shell game in which contemporary political preferences are shuffled around and made to appear part of the Constitution’s original meaning.”

The actual history of the Second Amendment is quite different from the fantasy versions advanced by Scalia and Alito. As the late Justice John Paul Stevens, joined by three of his colleagues, wrote for the minority in Heller:

“The Second Amendment was adopted to protect the right of the people of each of the several States to maintain a well-regulated militia. It was a response to concerns raised during the ratification of the Constitution that the power of Congress to disarm the state militias and create a national standing army posed an intolerable threat to the sovereignty of the several States. Neither the text of the Amendment nor the arguments advanced by its proponents evidenced the slightest interest in limiting any legislature’s authority to regulate private civilian uses of firearms.”

Although Heller and McDonald were the products of extreme rightwing judicial activism, they were technically limited in scope, as they dealt with the right to keep guns in the home. Ever since those cases were decided, however, the gun lobby has worked to bring a new test case to the Supreme Court to extend the right to bear arms beyond the home.

The lobby has finally found its vehicle in a new case–New York State Pistol Association v. Bruen— that will be decided by the end of June, when the court completes its current term.

Bruen was brought by two individuals and the state affiliate of the National Rifle Association to overturn a New York law that places limits on the issuance of concealed weapons permits to carry guns outside the home. Under New York’s regulatory scheme, people seeking such permits are required to demonstrate a special need for protection —”proper cause” in the words of the statute—to qualify. The NRA contends the law is unconstitutional.

After losing in the lower courts, the Bruen plaintiffs appealed to the Supreme Court, where they are likely to prevail. With the addition of three Trump appointees—Neil Gorsuch, Brett Kavanaugh, and Amy Coney Barrett—conservatives now hold a solid 6-3 majority on the bench. No longer constrained by the need for caution and compromise, they are set to dramatically extend gun rights under the Second Amendment.

Originalism was front and center during the oral arguments the court heard in the case last November.

During the arguments, the Justices paid scant attention to the dire consequences of unleashing more guns on the streets and subways of present-day New York City. They instead peppered the attorneys for both sides with questions about the origins under Anglo-American law of the right to carry arms in public places. At several points in the two-hour session, the attorneys were asked to share their thoughts on whether the Statute of Northampton, an act of the English Parliament passed in 1328, banned the carrying of weapons other than by the king’s servants in fairs and markets.

The questioning would have made for an amusing Saturday Night Live or Monty Python skit, but this was no stand-up bit. Commenting on the oral arguments, Professor Cornell told the BBC it was “beyond ironic” that anyone would look to Medieval England for resolution of the case. “It just doesn’t make any sense whatsoever to anyone who really understands the complexity of English history. Obviously, that doesn’t include many people in the gun rights community or many people sitting on some courts in America.”

Should the New York statute be declared unconstitutional, similar measures in California, New Jersey, Delaware, Hawaii, Maryland, Massachusetts, Connecticut, and elsewhere will likely fall, with dire and deadly consequences for public safety. Worse still, depending on the scope of the court’s ruling, other gun-control laws on background checks and the sale of assault weapons and high-capacity magazines could become vulnerable to constitutional challenges.

The gun homicide rate in the United States is nearly eight times higher than the rate in Canada, and a whopping 100 times higher than in Britain. This year is shaping up to be particularly horrific. As of May 30, the United States had recorded 17,817 deaths from firearms, counting both suicides and unlawful killings, according to the Washington, D.C.-based Gun Violence Archive. We also had recorded 228 mass shootings (defined as an event involving four or more victims).

In any sane democracy, one might expect the highest court in the land to step in and do something to uphold sensible gun-control regulations when given the opportunity. But in fact, our Supreme Court is poised to do just the opposite. Keep that in mind when the next mass shooting inevitably occurs, perhaps in a neighborhood close to your own.

Bill Blum is a former California administrative law judge. As an attorney prior to becoming a judge, he was one of the state’s best-known death-penalty litigators. He is also an award-winning writer and legal journalist, and the author of three popular legal thrillers published by Penguin/Putnam as well as scores of features and book reviews published in a broad array of magazines and newspapers. His non-fiction work has appeared in a wide variety of publications, ranging from Common Dreams and The Nation to the Los Angeles Times, the L.A. Weekly and Los Angeles Magazine.