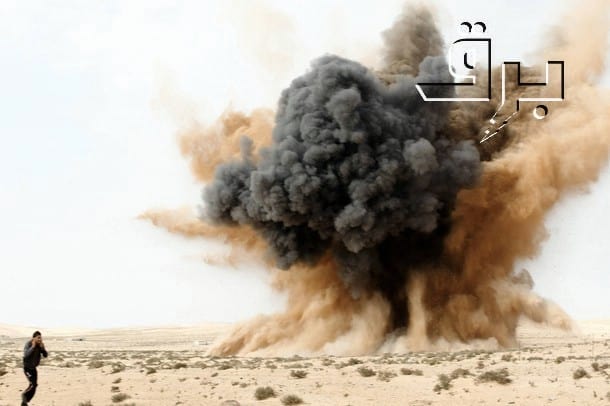 A rebel holds his ears as a bomb launched by a Libyan air force jet loyal to Libya’s leader Muammar Gaddafi explodes in the desert near Brega, March 2, 2011. (Photo BRQ Network @ flickr/cc)

Just five years after bombing Libya to dispose of Muammar Gaddafi, the US is now officially bombing the country again, this time against alleged Isis terrorist strongholds that cropped up in the power vacuum created by the last bombing.

It’s yet another episode of the War on Terror Circle of Life, where the US bombs a country and then funnels weapons into the region, which leads to chaos and the opportunity for terrorist organizations, which then leads more US bombing.

Like usual in the Obama administration’s wars, there was no Congressional vote on the latest airstrikes in Libya and no declaration of war as required by the Constitution. The administration is pinning the legal authority for this military incursion on the 2001 Authorization for Military Force that was meant for Afghanistan and the perpetrators of 9/11, al-Qaida. Isis, of course, didn’t exist until years later, and the two groups are now enemies, but those technicalities don’t seem to bother the Obama administration, which is continuing to expand US military presence abroad with little to no public input.

The pattern of bombing-chaos-bombing in Libya follows the same pattern as Iraq, which was largely free of al-Qaida members before the US invasion in 2003, only to see it become a terrorist hotbed for the group once the US military arrived, eventually leading to the formation of Isis. Iraq War III has been quietly but steadily increasing for months now – the US has well over 5,000 troops back in the country after leaving at the end of 2011. The US troop presence went up again recently, recently reaching battalion-level numbers.

With even less fanfare, the same cycle has been playing out in Yemen, which the US has been backing in its appalling and indiscriminate Saudi Arabian bombing campaign that has killed thousands of civilians and led to many calls of war crimes. The war there continues to receives scant coverage in the media and is completely ignored by both presidential campaigns despite the fact that it has also created space for al-Qaida of the Arabian Peninsula (AQAP) to completely rejuvenate itself. As a Reuters investigation in April put it, AQAP has “become stronger than at any time since it first emerged almost 20 years ago.”

… CONTINUE READING IN THE GUARDIAN …