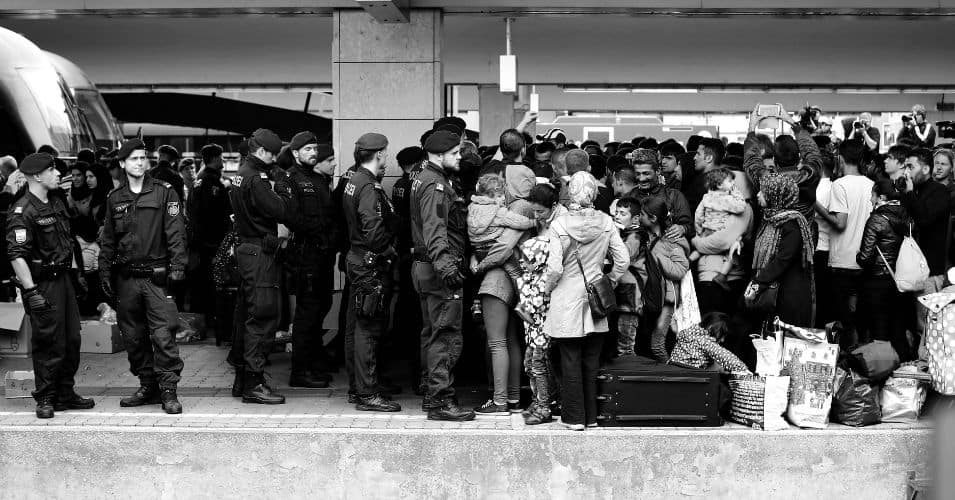 Many of us are familiar with the Emma Lazarus poem on a plaque at the base of the Statue of Liberty:

“Give me your tired, your poor,
Your huddled masses yearning to breathe free,
The wretched refuse of your teeming shore.
Send these, the homeless, tempest-tost to me,
I lift my lamp beside the golden door!”

These words, written in the late 19th century, depicted the United States as a refuge for people who had crossed the Atlantic seeking a new home and a better life than they experienced in the places they left behind. The current massive humanitarian crisis in the Middle East, which has created a flood of refugees exiting Syria, obliges our country to live up to the welcome promised in that poem.

With George W. Bush’s invasion and occupation of Iraq, which led to the birth of Islamic State, the U.S. government played a significant role in destabilizing the Middle East. The United States and its allies—including Saudi Arabia and Turkey—have trained, financed and supplied weapons to forces fighting the government of Bashar al-Assad in Syria. This has exacerbated the refugee crisis we are now witnessing.

History professor and author Juan Cole wrote that the U.S. invasion of Iraq created 4 million refugees, about one-sixth of Iraq’s population. But “the U.S. took in only a few thousand Iraqi refugees after causing all that trouble,” he noted. The United States must do better with the Syrian refugees.

Former Secretary of State Colin Powell, speaking about the U.S. invasion of Iraq, famously said, “If you break it, you own it.”

Yet President Barack Obama pledged to lift the U.S. lamp to only 10,000 of the 4 million refugees fleeing Syria. After fielding criticism of the United States for taking so few, Secretary of State John Kerry announced that the U.S. would accept 185,000 refugees over the next two years. But this figure reflects the total number from many countries; there is no indication the administration will accept more than 10,000 from Syria.

The United States has a moral obligation, and perhaps a legal one, to accept many of the Syrian refugees. Evolving international norms suggest that all the countries of the world have a duty to provide refuge to those who have fled their homeland to escape persecution or war. Because the United States has 28 percent of the world’s wealth, we should take at least 28 percent of the refugees, according to Phyllis Bennis of the Institute for Policy Studies. That would amount to about 350,000 people. And she says the United States should immediately pay 28 percent of the United Nations’ refugee relief request, about $5.5 billion, to support nearly 6 million refugees from Syria and nearby countries through the end of 2015.

Although many Syrian refugees may meet this definition, many others don’t because they fled to escape the violence of the armed conflict ravaging their country, not necessarily to avoid persecution.

Some scholars, however, think a much broader definition of “refugee” is evolving under conventional and customary international law. For example, William Thomas Worster wrote in the Berkeley Journal of International Law that a refugee could be a person who has a well-founded fear of “a threat to life, security or liberty due to events seriously disturbing public order” throughout his or her country—and because of that fear is unable or unwilling to remain or return.

The U.N. High Commissioner for Refugees (UNHCR) has defined “temporary protection” of refugees as “a means, in situations of large-scale influx and in view of the impracticality of conducting individual refugee status determination procedures, for providing protection to groups or categories of persons who are in need of international protection.” Temporary protection “is primarily conceived as an emergency protection measure of short duration in response to large-scale influxes, guaranteeing admission to safety, protection from non-refoulement and respect for an appropriate standard of treatment.” The first time the UNHCR formally recommended the granting of temporary protection involved “persons fleeing the conflict and human rights abuses in the former Yugoslavia.”

The principle of international law called non-refoulement is the prohibition of forced return. This means a country has a duty not to return an individual to a country where he or she will face persecution. Article 33(1) of the Refugee Convention provides, “No Contracting State shall expel or return (‘refouler’) a refugee in any manner whatsoever to the frontiers of territories where his life or freedom would be threatened on account of his race, religion, nationality, membership of a particular social group or political opinion.” Even if a country is not a party to the Refugee Convention, it is bound by the customary international law norm of non-refoulement.

As reported in a recent New York Times editorial, immigrants provide many more benefits than burdens, including paying more in taxes than they claim in government benefits and doing jobs that are hard to fill. As the Congressional Budget Office concluded in 2013, gross domestic product would rise by 5.4 percent and the federal budget deficit would fall by $897 billion over the next 20 years if undocumented workers are given a path to citizenship and more work-based visas are made available to foreigners.

In accordance with its legal and moral duty, the United States should step up to the plate and welcome significant numbers of refugees. More than 20 former senior Democratic and Republican officials are urging the Obama administration to accept 100,000 Syrian refugees, and to contribute up to $2 billion to finance their resettlement and help international refugee efforts. The United States has already accepted 1,500 Syrian refugees since the beginning of the hostilities and has contributed more than $4 billion in humanitarian aid for them.

Instead of demanding regime change in Syria, the United States and its allies must stop providing weapons, training and funding to the violent opposition forces. They should enlist Russia and Iran in pursuing a diplomatic solution to this tragic conflict.

Up to this point, some of Syria’s immediate neighbors—Turkey, Jordan, Iraq, Lebanon and Egypt—have taken in 95 percent of the refugees, according to Amnesty International. Turkey has accepted nearly 2 million, followed by Lebanon, which has taken over 600,000. Jordan has taken half a million. Iraq has accepted almost 250,000. Egypt has accepted more than 130,000.

But Saudi Arabia, the United Arab Emirates, Qatar, Oman, Bahrain and Kuwait—the wealthiest nations in the region—have taken none of the refugees. Likewise, Iran and Russia, which support the Assad government, have refused permanent residency or asylum to the refugees.

Some of the Syrian refugees are Palestinians who first became refugees after the 1947-48Nakba, when 80 percent of historic Palestine was ethnically cleansed to create Israel. They are “double refugees.” But Israel has refused to take in any Syrian refugees.

Israel has apparently forgotten that in 1939, 937 Jewish refugees seeking to escape the Nazis made the perilous ocean voyage on the SS St. Louis, but the United States turned them away. Forced to return to Europe, hundreds of them were then killed by Hitler’s forces. The nations of the world, and particularly the United States, must ensure the current refugees obtain the shelter to which they are entitled.

Marjorie Cohn is a professor at Thomas Jefferson School of Law, former president of the National Lawyers Guild, and deputy secretary general of the International Association of Democratic Lawyers. Her latest book is, Drones and Targeted Killing: Legal, Moral, and Geopolitical Issues. Previous books include: Cowboy Republic: Six Ways the Bush Gang Has Defied the Law and co-author of Rules of Disengagement: The Politics and Honor of Military Dissent (with Kathleen Gilberd); and an anthology, The United States and Torture: Interrogation, Incarceration and Abuse.