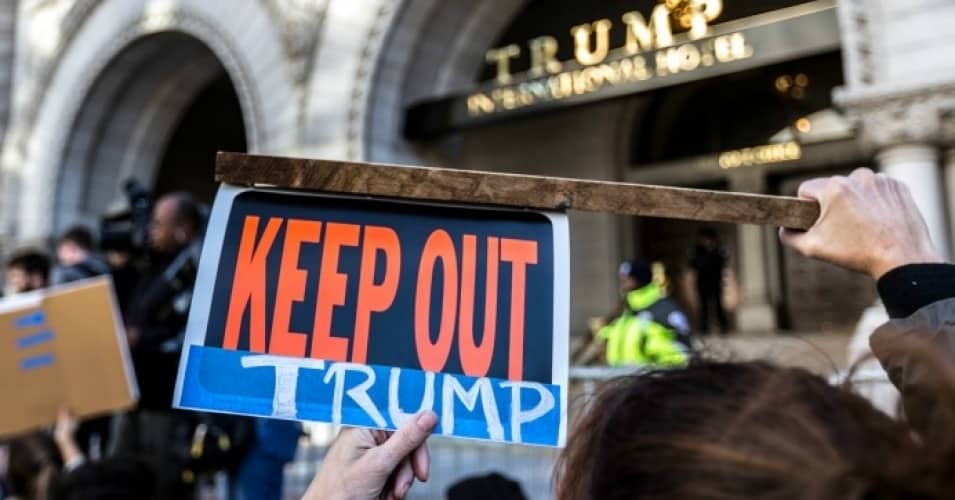 When big changes and dangers arise, you have to think big. You don’t put out a forest fire with a glass of water. Thinking small can prevent you from even recognizing trouble, let alone your options for overcoming it. There’s never been a time when thinking big matters more than now. Many across the United States are now trying to figure out how to survive Trump, but it may still be possible to stop him. His regime is not yet inevitable.

It’s a long shot, but one worth trying, the way someone diagnosed with a disease with a 3% survival rate might want to do what it takes to try to be part of the 3%. You don’t get there if you give up at the outset. Trump represents a catastrophe on a scale many seem to have trouble grasping, an attack on what remains democratic and uncorrupted in our old and messy system of government, a threat to international stability, to efforts to address climate change, and to human rights at home and around the world.

Is it possible to prevent him from taking power? Why not explore the wildest possibilities, when the alternative is surrendering to the worst? It may be very possible – but only if we imagine it is possible and work to make the possible the actual.

It is too soon to give up. It is too soon to reconcile ourselves to surviving Trump when the possibility of preventing him is before us. It was a huge surprise that Jill Stein and the Green party chose to demand recounts in three swing states, and another that the Clinton campaign got onboard. What the recount reveals may also be a surprise. People have used “game changer” a lot, but the game of figuring out what this election means and where it takes us seems to change daily, and some of that change depends on what we do. Why not seize history before it tramples us?

What if the recount Jill Stein and the Green party have initiated finds that Trump’s small, surprising lead in three swing states vanishes when the ballots are reviewed? What if Alexandra Chalupa’s report now on its way to Congress presents compelling evidence that the election was hacked? What if the election investigations Republican senator Lindsey Graham and others have asked for reveal corruption or collusion? What if someone (please) finally does some really solid work on investigating the numerous ties between the Trump campaign team and Russia and finds – well, shouldn’t we know what the influences and collaborations, if any, have been?

We are in a national emergency as an alarmingly incompetent and utterly amoral gang prepares to destroy the climate, human rights, the foreign policy positions the US has relied on for stability since the second world war, and more. You don’t have to love Clinton or Stein to see that this is a radical departure from where we have been. .

A story that has haunted me for decades is about the equipment monitoring the ozone layer over the South Pole decades ago. The computer program was written to filter out improbable data and so missed the dramatic change in the atmosphere until the glitch in the program was eliminated. There’s a status quo bias at work in our mainstream media and too many of our organizations that normalizes the outrageous. There’s been a lot of talk about “normalizing” the Trump team’s players and agenda. We might also talk about normalizing astonishing news and enormous threats. News that should scream at us in six-inch-high letters on the front page is presented in a mumble inside: stuff like the fact that we are running out of time to address catastrophic climate change, and also the Trump administration promises to sabotage all efforts to address climate change. We must not normalize catastrophe out of a desire to seem calm or moderate.

As the New York Times reported, nine days before the election Barack Obama used his communications system to tell Russian leader Vladimir Putin to stop meddling in the US election. “The White House confirmed in a statement on Wednesday that eight days before the presidential election, the United States ‘contacted the Russian government directly regarding malicious cyberactivity’ that was ‘targeting US state election-related systems’. It sent the message over a rarely used system: a hotline connecting the Nuclear Risk Reduction Centers in both countries, which they had agreed three years ago could also be employed to deal with major cyberincidents,” the New York Times report said.

These kinds of stories raise questions so big no one seems to have asked them. Are we in the middle of a cyberwar? And did the Russians hack the election in ways that changed the outcome?

What does it mean that, as the Washington Post quietly reported after the election: “Russian government officials conferred with members of Donald Trump’s campaign team, a senior Russian diplomat said.”

There are no precedents for the situations we find ourselves in, which is why we need to think big about how to respond. I visited Japan after the great Tohuko earthquake of 2011. Many people died because they evacuated to the right height to escape tsunamis they remembered; they were drowned by a tsunami bigger than any in living memory. Extreme responses to extreme situations are appropriate.

This week Harvard professor and award-winning Holocaust historian Timothy Snyder issued cautions about surviving anti-democratic regimes. “Do not obey in advance,” he advised. “Much of the power of authoritarianism is freely given. In times like these, individuals think ahead about what a more repressive government will want, and then start to do it without being asked. You’ve already done this, haven’t you? Stop. Anticipatory obedience teaches authorities what is possible and accelerates unfreedom.” Anticipatory disobedience keeps open space for our power, our voices, and our rights. That’s part of what thinking big means, but in this moment it can mean more.

Regimes have been toppled by the daring whose daring manifested as the imagination to believe that things could be different, the confidence that we have the power to pursue those possibilities, and the courage to pursue them. These last few weeks I’ve been thinking about how what looked like small, feeble-looking efforts in eastern Europe grew and amassed over the years to topple a series of Soviet satellite regimes in 1989. The audacity, the courage, the vision of the people gathered around the Polish Solidarity movement, the musicians and theater people in Czechoslovakia, the religious and secular groups in East Germany: their spirit and actions shattered the eastern bloc of Soviet-aligned nations. In 2013, Ukrainians rose up and drove out Viktor Yanukovych, a corrupt Russian-backed president.

We may need to be courageous and strategic as they were; we may need to be for years to come. But now we have an extraordinary opportunity to prevent the worst-case scenario now facing us or at the very least to weaken and marginalize and discredit an outrageous regime-in-waiting. The possibilities before us in this moment are like a series of open doors; as time passes, doors will slam shut behind us. There is no better time; there is no one else to seize the possibilities. It’s up to us, which means it’s up to you. Think big. And act. Everything depends on it.

Rebecca Solnit is an activist, TomDispatch.com regular, and author of many books, including the just published, Men Explain Things to Me (Dispatch Books, Haymarket Books). Her first essay for TomDispatch.com turned into the book Hope in the Dark: Untold Histories, Wild Possibilities, since translated into eight languages. Other previous books include: The Faraway Nearby, A Paradise Built in Hell, Wanderlust: A History of Walking, The Battle of The Story of the Battle in Seattle (with her brother David), and Storming The Gates of Paradise: Landscapes for Politics. She is a contributing editor to Harper’s Magazine.