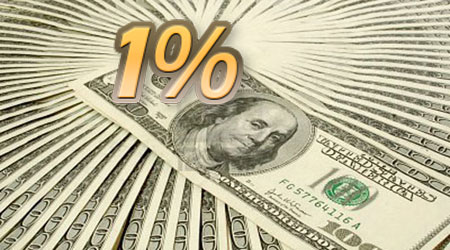 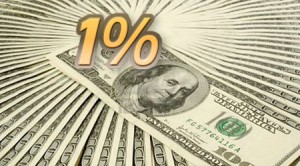 I saw the movie Inequality for All, where Robert Reich explains the depth and meaning of inequality in America. He paints a compelling picture.

Reich sets up the movie with a teaser: “Something happened in the mid-’70s.”

Indeed “something did happen in the mid-’70s.” For one thing, since then workers’ wages as a fraction of the total economy have lagged by over a trillion dollars per year. If workers’ wages had kept up with gains in productivity since the mid-70’s, wages would be double what they are now. Most new income goes to the top 1 Percent. 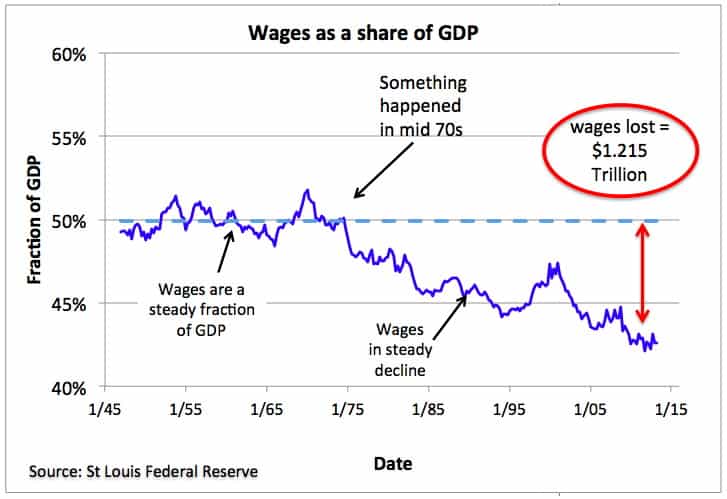 The movie translates my blue squiggly line in the graphic into human terms, seen in the faces of families, students, workers, co-workers and neighbors. Their struggle, disappointment, and diminished prospects answer another key question in the movie: Does inequality matter?

It matters. A lot.

The upward spiral of my parents’ era expressed American ideals — stronger communities, opportunity and fairness, shared prosperity, and investment in the future.

In one scene in the movie, Robert Reich is speaking to power plant workers facing layoff. One worker says the owners are probably smarter and more deserving than he is, and they should keep the gains he produces. He is happy to take whatever they offer.

We hear a different view from a co-worker’s wife. Her husband takes his job seriously, works hard and creates value through his work. Don’t rich people have enough already? What is gained when the 1 Percent have even more? Isn’t there some left over for her family?

This woman has just enough self-esteem to claim a fair share of the wealth her husband creates. Her husband’s work has dignity, and her family has a legitimate claim when our society divides the gains from work.

Attitudes matter. My daughter once told me that I usually make eye contact with housekeepers in a hotel, or a waiter filling my water glass, or a cab driver. Actually, most people I know in the labor movement do that. It’s a fundamental labor value — all work has dignity. 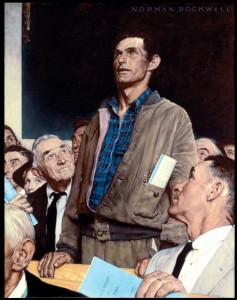 Look at this image from the Norman Rockwell Museum, representing a Vermont Town Hall meeting. The tradesman with dirty fingers has the attention of his neighbors. His interests matter.

It took decades to create this trillion dollar money pump for the 1 Percent.

First, advocates for the 1 Percenttook away the dignity of work. In today’s political discourse, the tradesman in the Rockwell painting is thrown together with teachers, public employees, construction workers, grocery store clerks, students in public universities, and fast food workers as moochers, or parasites.

Second, public sentiment and public policies shifted bargaining power away from workers, in favor of the 1 Percent.

Business strategy replaced “stakeholder” value with shareholder value. These terms are obscure, but the very real effect was to abandon any commitment large businesses may have had to communities and workers.

Job security has largely vanished. The idea of “a career” has been replaced by contingent or precarious work. We see more part-time, and temporary work, “perma-temps,” unpaid interns, wage theft, and dumping older experienced workers in favor of cheaper younger workers. Good jobs are privatized or contracted out, where the same worker comes back at lower wages, with worse benefits and less job security. College professors — the ultimate knowledge workers — are displaced by precarious adjunct faculty.

When workers are regarded as commodities, businesses provide less training on the job, externalizing those costs to workers and communities. Pensions express a long-term employment commitment. The message of a 401(k) is portability — you will leave this job, probably in 3-5 years.

Executives aggressively oppose union organizing, spending millions of dollars to intimidate, discourage, delay, and punish union organizers. We hear less and less about a strike, where workers seek more or defend what they have. Now, it’s lockouts by employers demanding concessions — at ports, in hockey, basketball and football — even symphony orchestras in Minneapolis and New York!

Households have stopped saving, piling up huge debt instead. Families, living paycheck to paycheck, are constantly at risk of ruin from layoffs or medical expenses. Crushing student loans make recent graduates very compliant and risk-averse in the labor market. Changes in bankruptcy laws favor investors, and banks, but put homeowners, students and retirees in the back seat.

Speculative hedge fund income and capital gains are taxed at a fraction of rates the rest of us pay on wages and earned income.

The ultimate loss of bargaining power for workers is the billions spent to elect our political leaders. Having cornered the market in electoral politics, the 1 Percent are furiously discrediting the role of government, eroding worker protections, and dismantling programs that offered economic security and opportunity for past generations.

This shift in bargaining power happened for two reasons. In the early ’70s, the 1 Percent realized they could do it, and because we let them do it.

The power plant worker in the movie accepts his wage peonage, dependent on his patrón for his livelihood. His co-worker’s wife still believes in her husband’s career.

The first step toward disabling the trillion-dollar money pump is within our power as individuals. We can recognize a key human value — the dignity of work. We are all connected to our communities. We all do better when we all do better.

This work is licensed under a Creative Commons Attribution-Share Alike 3.0 License
Stan Sorscher is on staff at Society for Professional Engineering Employees in Aerospace (SPEEA), a labor union representing aerospace engineers, scientists and technical workers, and is President of the Washington Fair Trade Coalition. He is active in trade, economic development, and other public policy issues.  Follow Stan on Twitter:www.twitter.com/sorscher
Economic Justice