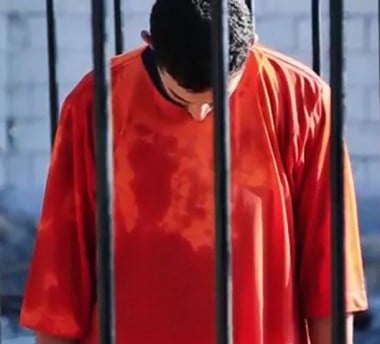 We fire missiles from the sky that incinerate families huddled in their houses. They incinerate a pilot cowering in a cage. We torture hostages in our black sites and choke them to death by stuffing rags down their throats. They torture hostages in squalid hovels and behead them. We organize Shiite death squads to kill Sunnis. They organize Sunni death squads to kill Shiites. We produce high-budget films such as “American Sniper” to glorify our war crimes. They produce inspirational videos to glorify their twisted version of jihad.

“From violence, only violence is born,” Primo Levi wrote, “following a pendular action that, as time goes by, rather than dying down, becomes more frenzied.”

The burning of the pilot, Jordanian Lt. Muath Al-Kaseasbeh, by ISIS militants after his F-16 crashed near Raqqa, Syria, was as gruesome as anything devised for the Roman amphitheater. And it was meant to be. Death is the primary spectacle of war. If ISIS had fighter jets, missiles, drones and heavy artillery to bomb American cities there would be no need to light a captured pilot on fire; ISIS would be able to burn human beings, as we do, from several thousand feet up. But since ISIS is limited in its capacity for war it must broadcast to the world a miniature version of what we do to people in the Middle East. The ISIS process is cruder. The result is the same.

Terror is choreographed. Remember“Shock and Awe”? Terror must be seen and felt to be effective. Terror demands gruesome images. Terror must instill a paralyzing fear. Terror requires the agony of families. It requires mutilated corpses. It requires anguished appeals from helpless hostages and prisoners. Terror is a message sent back and forth in the twisted dialogue of war. Terror creates a whirlwind of rage, horror, shame, pain, disgust, pity, frustration and impotence. It consumes civilians and combatants. It elevates violence as the highest virtue, justified in the name of noble ideals. It unleashes a carnival of death and plunges a society into blood-drenched madness.

During the Bosnian War of the 1990s, relatives paid enormous sums to retrieve the bodies of their sons or husbands being held by corpse traders on the opposing side. And they paid even more in attempts to secure the release of sons or husbands when they were alive. Such trades are as old as war itself. Human beings, whether in our black sites or in the hands of Islamic militants, are war’s collateral.

Not all hostages or prisoners evoke the same national outcry. Not all command the same price. And not all are slated for release. The Revolutionary Armed Forces of Colombia (FARC), which turned kidnapping and ransom negotiations into an efficient business and took hundreds of captives, held tiers of hostages. Celebrity hostages—including politicianIngrid Betancourt, who was captured while she was running for the presidency of Colombia and who was freed by the Colombian military after being held six years—were essentially priced out of the market. FARC also had middle-priced hostages such as police officers and soldiers and low-priced hostages who included peasants. Celebrity hostages are worth more to all sides of a conflict while they are in captivity. These celebrity hostages—onetime Italian Prime Minister Aldo Moro, who was kidnapped and executed by the Red Brigades in 1978, is another example—heighten war’s drama. Saddam Hussein in a cage served this purpose. Celebrity hostages, because the price demanded for their release is so extravagant, are often condemned to death in advance. I suspect this was the case with the American journalist James Foley, who was beheaded in captivity. The proposed ransom was so wildly exorbitant—100 million euros and the release of Islamic radicals being held by the United States—that his captors probably never expected it to be paid.

The Jordanian government is struggling to contain a virulent, if small radical Islamic movement. There is unease among Jordan’s population, as there is unease in the United States about American air assaults on ISIS. The death of the Jordanian pilot, however, bolsters the claims by Washington and Amman that the battle with ISIS is a struggle between democratic, enlightened states (although Jordan is not a democracy) and savage jihadists. And Jordan’s hanging of two al-Qaida members Wednesday was calculated, along with Jordanian fighter jet strikes in Syria on the de facto capital of ISIS, to highlight these supposed differences and intensify the conflict.

Sajida al-Rishawi, one of the two who were hanged, had been on death row since 2005 for her role in the attacks on Amman hotels that left 60 people dead. She had been an associate of the Jordanian-born al-Qaida leader Abu Musab al-Zarqawi, who was killed in Iraq in 2006. The tit-for-tat executions by Jordan and ISIS, like the airstrikes, are useful in playing the game of terror versus terror. It fosters the binary vision of a battle between good and evil that is crucial to maintaining the fevered pitch of war. You do not want your enemy to appear human. You do not want to let your population tire of the bloodletting. You must always manufacture terror and fear.

France and most other European states, unlike the United States, negotiate with kidnappers and pay for hostages. This has devolved into an established business practice. The tens of millions of dollars raised by ISIS through kidnapping is a significant source of its revenue, amounting to perhaps as much as half of its operating budget. The New York Times, in an investigation, wrote in July 2014 that “Al Qaeda and its direct affiliates have taken in at least $125 million in revenue from kidnappings since 2008, of which $66 million was paid just last year.” But negotiating and paying ransoms has consequences. While French and other European citizens are more likely to be ransomed, they are also more likely to be taken hostage. But France is spared the scenes that Americans, who refuse to pay, must endure. And because of this France is able to remain relatively sane.

Terror serves the interests of the war mongers on both sides of the divide. This is what happened during the 444-day Iran hostage crisis that took place from 1979 to 1981. And this is why Jordan—unlike Japan, which saw two of its nationals executed but is not involved militarily against ISIS—has reacted with sanctimonious fury and carried out retaliation. It is why Foley’s murder strengthened the call by the war lobby in Washington to launch a bombing campaign against ISIS. Terror—the terror we commit and the terror done to us—feeds the lusts for war. It is a recruiting tool for war’s crusade. If ISIS were not brutal it would have to be made to seem brutal. It is the luck of the fanatics we oppose, and the fanatics in our midst, that everyone’s propaganda needs are amply met. The tragedy is that so many innocents suffer.

Mideast governments allied with the West, including Jordan, Iraq and Saudi Arabia, have watched in horror as ISIS has carved out of parts of Syria and Iraq to create a self-declared caliphate the size of Texas. ISIS has managed through oil exports and the business of hostage taking to become financially self-sufficient. The area under its control has become a mecca for jihadists. It has attracted an estimated 12,000 foreign fighters, including 2,000 from Europe.

The longer the rogue caliphate remains in existence the more it becomes a mortal threat to the West’s allies in the region. ISIS will not invade countries such as Saudi Arabia and Jordan, but its continued existence empowers the discontented and the radicals in those countries, many groaning under collapsing economies, to stoke internal upheavals. The United States and its allies in the region are determined to erase ISIS from the map. It is too destabilizing. Dramas like these, because they serve the aims of ISIS as well as those of the nations seeking to destroy ISIS, will be played out as long as the caliphate exists.

Terror is the engine of war. And terror is what all sides in this conflict produce in overabundance.