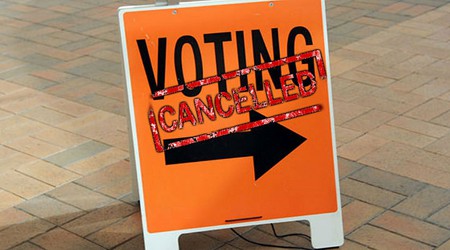 By Ari Berman
The Nation

On Wednesday evening, the Supreme Court overruled a Fourth Circuit Court of Appealsdecision reinstating same-day registration and out-of-precinct voting in North Carolina for the midterms. Because this was an order to stay the injunction, not a decision on the full merits of the law, the court’s majority did not explain its reasoning. Justices Ginsburg and Sotomayor dissented.

It’s the second time the Supreme Court has ruled against voting rights in the past ten days, after the court also overruled an appeals court decision reinstating a week of early voting and same-day registration in Ohio.

The roots of the North Carolina case go back to June 25, 2013, when the Court struck down Section 4 of the Voting Rights Act in Shelby County v. Holder, which meant that states with the worst history of voting discrimination—like North Carolina—no longer had to approve their voting changes with the federal government.

A month after that ruling, North Carolina passed the country’s toughest voting restrictions, repealing or curtailing every voting reform in the state that encouraged people to vote. The bill became far more extreme because of the Shelby decision and the federal government no longer had the power to prevent it from becoming law. As Justice Ginsburg wrote in her dissent, “These measures likely would not have survived federal preclearance.”

Key parts of the voting law were challenged in court this summer. A district court denied a preliminary injunction for the Justice Department and civil rights groups like the North Carolina NAACP and the ACLU, but the Fourth Circuit reinstated same-day registration and out-of-precinct voting on October 1.

The Supreme Court’s decision could have a very negative impact on the election. Nearly 100,000 voters used same-day registration during the early voting period in 2012, including twice as many blacks as whites. Roughly 7,500 voters cast their ballots in the right county but wrong precinct in 2012.

States with same-day registration, like North Carolina, have the highest voter turnout in the country. “Average voter turnout was over 10 percentage points higher in SDR states than in other states,” Demos reported for 2012. North Carolinians now have only two more days to register to vote before the October 10 deadline.

Hundreds of voters were prevented from casting ballots in the May primary when the state eliminated these reforms—a disturbing preview of what’s to come. North Carolina has one of the closest Senate races in the country between Kay Hagan and Thom Tillis and is expected to have a large turnout this November. The Supreme Court’s decision could very well decide who controls the Senate.

There’s a cruel irony behind this ruling. The most popular conservative talking point during theShelby County debate was that Section 2 of the VRA could replace Section 5.

“It seems to me that the Government can very easily bring a Section 2 suit,” Justice Kennedy said during oral arguments.

North Carolina’s new voting restrictions are now in effect until a full trial in July 2015. The Tarheel State is the case study for how devastating the Supreme Court’s gutting of the VRA has been.