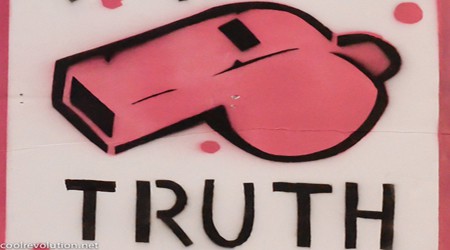 Privacy advocates and NSA critics are in no way jumping for joy, but news that both the Obama administration and lawmakers in Congress are circulating new proposals for ending the bulk collection of U.S. phone data has some nodding cautious approval as others point out that the proposals are an acknowledgement that the NSA has gone too far and that no consideration of revamping the current programs would be happening without the public outrage that followed the disclosure of the program by a former NSA employee.

The existence of the bulk spying effort by the NSA, under what critics call a “stretched” interpretation of Section 215 of the Patriot Act, was a well-guarded secret until leaks provided by whistleblower Edward Snowden to journalists last year put the program in the public spotlight.

Reporting from the New York Times on Tuesday, based on information provided by unnamed “senior White House officials,” says that the Obama administration rule changes would force the NSA to “end its systematic collection of data about Americans’ calling habits.”

Instead of the agency itself automatically collecting all phone records in bulk, according to the Times, the so-called phone metadata records—which include time and place of outgoing calls and their destination—”would stay in the hands of phone companies, which would not be required to retain the data for any longer than they normally would. And the N.S.A. could obtain specific records only with permission from a judge, using a new kind of court order.”

Journalists who have followed the Snowden revelations closely were crediting Snowden for making even the idea of NSA reform possible at the very highest levels of government: 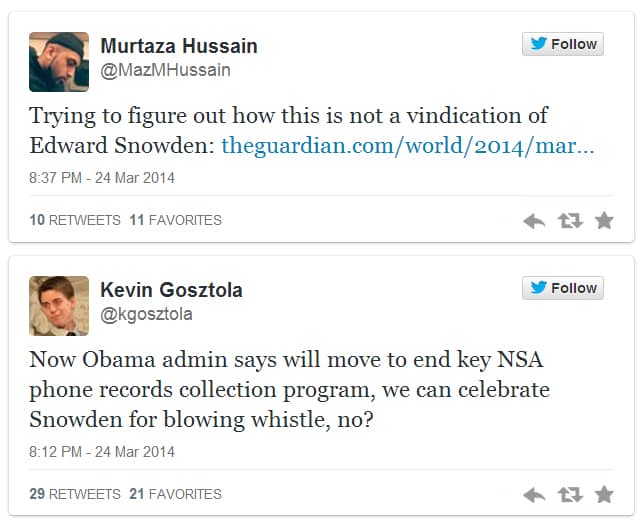 Speaking to the Times, the ACLU’s Jameel Jaffer said, “We have many questions about the details, but we agree with the administration that the N.S.A.’s bulk collection of call records should end.” He added, “As we’ve argued since the program was disclosed, the government can track suspected terrorists without placing millions of people under permanent surveillance.”

On Monday, the Guardian‘s Spencer Ackerman acquired a copy of a draft bill now being circulated through the House of Representatives that also seeks to reform the bulk collection program. Called the ‘End Bulk Collection Act of 2014,’ the bill seems to track closely, in some ways, with the White House proposal and would prevent the NSA from acquiring “records of any electronic communication without the use of specific identifiers or selection terms.”

The bill, however, is being co-sponsored by prominent members of the House Intelligence Committee and ardent backers of the NSA, chairman Michael Rogers (R-Michigan) and Rep. Dutch Ruppersberger (D-Maryland). On the details of the legislation, which could make it easier for the NSA to spy on some Americans, Ackerman reports:

A draft of the bill acquired by the Guardian proposes the acquisition of such phone or email data for up to a year and would not necessarily require prior approval by a judge. Authorisation of the collection would come jointly from the US attorney general and director of national intelligence.

The NSA or the FBI would not be able to collect the content of those communications without probable cause.

Nor does the House intelligence committee’s draft bill require phone companies or any other private entity to store bulk phone records on behalf of the NSA – a proposal that has met with stiff opposition from the telecom companies. In essence, the draft bill gets rid of bulk collection, but makes it easier for government authorities to collect metadata on individuals inside the US suspected of involvement with a foreign power.

The House intelligence committee proposal represents competition to a different bill introduced last fall by privacy advocates in the Senate and House judiciary committees known as the USA Freedom Act.

That bill, which has 163 co-sponsors in both chambers, does not lower the legal standard for data collection on US persons, and would prohibit the NSA from searching for Americans’ identifying information in its foreign-oriented communications content databases, something the House intelligence bill would not.

A press conference is scheduled for Tuesday morning on Capitol Hill by Ruppersberger and Rogers as they present their new legislation.