The shocking numbers behind corporate welfare 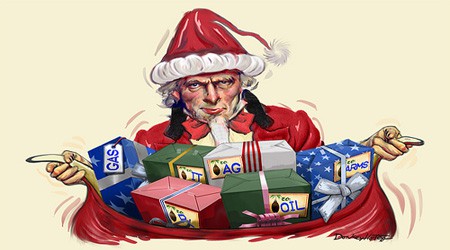 State and local governments have awarded at least $110 billion in taxpayer subsidies to business, with 3 of every 4 dollars going to fewer than 1,000 big corporations, the most thorough analysis to date of corporate welfare revealed today.

Dow Chemical had the most subsidies, 410 totaling $1.4 billion, followed by Warren Buffett’s Berkshire-Hathaway holding company, with 310 valued at $1.1 billion.

The figures were compiled from disclosures made by state and local government agencies that subsidize companies in all sorts of ways, including cash giveaways, building and land transfers, tax abatements and steep discounts on electric and water bills.

In fact, the numbers significantly understate the true value of taxpayer subsidies to businesses, for reasons explained below.

A fight for transparency

On a shoestring budget — roughly $1 million a year — Good Jobs First has for years dug through disclosure statements in all 50 states to compile reports on subsidies. Many of these subsidies existdespite strong provisions in many state constitutions prohibiting corporate welfare. New York state, for example, gets around this because its highest court ruled in 2011 that while the state may not give gifts directly, it can create an agency and let it give the gifts.

Good Jobs First does not oppose all subsidies. Rather, it favors transparency in the hope, executive director Greg LeRoy said, that any subsidies will be used wisely to expand the economy and not just prop up inefficient enterprises.

The data on welfare paid to companies come from Good Jobs First’s Subsidy Tracker 2.0, an improved Web tool that examines subsidies by linking subsidiaries to parent companies. The older version of the tool obscured the benefits to brand name corporate parents such as Apple, Google, Toyota and Walt Disney.

The size and range of the subsidies the tool has uncovered helps explain the burdens taxpayers must bear because so many major corporations rely on welfare for much or all of their profits rather than earning them.

Such burdens are especially hard on the poor. The bottom fifth of households in all but one state pay a larger share of their income in state and local taxes than the top 1 percent of earners. This means that corporate welfare effectively redistributes from the poor to those rich enough to own corporate stock.

Many forms of subsidies to business are excluded from Subsidy Tracker 2.0. For example, Good Jobs First does not count federal subsidies. It also leaves out indirect subsidies like perpetual monopoly rights of way for pipelines as well as rules that limit competition in pharmaceuticals, telecommunications and a host of other industries.

Phil Mattera, the organization’s research director, starts with publicly announced subsidies. With his small staff, he then gathers whatever records state and local governments make public or disclose through various Freedom of Information Act–type laws.

We know far too little about taxpayer support for business because of the ways governments do and do not collect data.

Federal, state and local governments publish exhaustively detailed statistical reports on welfare to the poor, disabled, sick, elderly and other individuals who cannot support themselves. The cost of subsidized food, housing and medical care are all documented at government expense, with the statistics posted on government websites.

But corporate welfare is not the subject of any comprehensive reporting at the federal level. Disclosures by state and local governments vary greatly, from substantial to nearly nonexistent.

Good Jobs First has prodded some states to expand disclosures. In many cases, though, the amounts and terms of corporate welfare are unknown because state and local governments assert that the information is confidential.

The best estimate of total state and local subsidies comes from Professor Kenneth Thomas, a political scientist at the University of Missouri at St. Louis. In 2010 he calculated the annual cost at $70 billion. No serious challenge has been made to this conservatively calculated figure, which in 2014 dollars comes to $75 billion. That is about $240 per person — nearly $1,000 annually for a family of four. That amounts to more than a week’s take-home pay for a median-income family with two parents and two children.

Few people realize the cost, however, because it is not represented by a deduction on their paychecks. What appears, rather, are burdens they bear in the form of taxes and Social Security.

Too big to fly on their own

Boeing’s $13.2 billion is a bit more than its pretax profits for the last two years. It is also equals a stunning 70 percent of the $18.2 billion of equity owned by Boeing shareholders.

Measured against the number of commercial jetliners sold — 648 last year, at an average of nearly $79 million per plane — these subsidies come to more than $20 million per aircraft.

While the subsidies did not go just to commercial jets and were not for one year, those figures give some perspective to the huge amount of money that taxpayers lavish on Boeing.

Second on the subsidy list is Alcoa, the old Aluminum Co. of America, which benefits from 91 subsidies totaling $5.6 billion. On the basis of its pretax income for last four years, that amounts to all the pretax profits Alcoa shareholders can expect for the next 189 years.

Alcoa operates in 35 countries, so I also calculated its state and local subsidies against its share of U.S. business for the last three profitable years. Measured this way, the subsidies equal 17 years of pretax U.S. profits.

These facts may surprise Alcoa shareholders, since the company makes virtually no mention of these gifts from taxpayers in its annual 10-K disclosure report. The only mention of subsidy is in terms of how Medicare drug benefits for retirees will lower annual pension costs, explaining about a nickel on each dollar of subsidy that Alcoa collects from American taxpayers.

In response to the findings, Alcoa said that, due to complexities in electricity pricing and to closing part of its New York smelting operation, the value of the subsidy was significantly less than Subsidy Tracker showed.

Taxpayers who want to understand the full dimension of their burdens should demand that Congress require and pay for detailed annual statistical reports showing every federal, state and local subsidy received by corporations, including the value of indirect subsidies like those perpetual rights of way to pipelines and other legal monopolies.

Without that information, we have no idea of the true cost of welfare or the cost of propping up companies that, evidently, cannot make their way on their own.

David Cay Johnston, an investigative reporter who won a Pulitzer Prize while at The New York Times, is a best-selling author who teaches the business, tax and property law of the ancient world at Syracuse University College of Law.