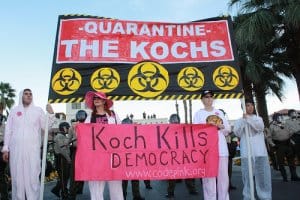 Scary because he claims “We don’t have the power to coerce anybody” while providing massive funding to organizations that attack public education, social programs, worker salaries, business regulations, and the environment.

Scary because he refers to himself with words like ‘integrity’ and ‘principles’ while saying “I want my fair share — and that’s all of it.”

Scary because he declares, “I want my legacy to be…a better way of life for…all Americans.” Here is some of the legacy of Charles Koch:

In Crossett, Arkansas, local waterways have been filled with toxic chemicals by the nearby Georgia-Pacific plant, a likely contributor to the surge in cancer and other illnesses in their community. A spokesman for Georgia-Pacific called the allegations “sensationalized.” But the EPA reported that the Crossett plant released 136,000 pounds of toxic chemicals to nearby waterways, and buried over 444,000 pounds in the soil to degrade. A USA Today study ranked Crossett in the top percentile of communities for schoolchildren’s exposure to cancer-causing chemicals.

More recently, the besieged city of Detroit has become the dumping ground for a three-story pile of petroleum coke covering an entire city block near the Detroit River. The pile is owned by Koch Carbon, a company controlled by Charles and David Koch. The mound of toxic matter has been spewing thick black “fugitive dust” over the homes of nearby residents.

Koch Industries was ranked as one of the top air polluters by the Political Economy Research Institute.

Rampant cronyism threatens the economic foundations that have made this the most prosperous country in the world. — Charles Koch

In a 2012 essay Charles Koch further criticized crony capitalism, saying “This growing partnership between business and government is a destructive force, undermining not just our economy and our political system, but the very foundations of our culture.” Yet Koch Industries is one of the biggest beneficiaries of oil subsidies and government contracts. According to the Center for Responsive Politics, the company has spent an average of almost $12 million per year from 2008 to 2012 on oil and gas industry lobbying.

There’s more. Over 100 bills introduced in 2013, backed by the American Legislative Exchange Council (ALEC) and heavily funded by the Kochs, seek to drive down wages, benefits, and worker rights.

The Nation reported that free-market libertarian Charles Koch coached economist Friedrich Hayek in the acquisition of publicly-funded retirement insurance and health care. Said Koch, “You are entitled to Social Security payments [and to] hospital coverage.”

With stunning condescension toward lower-income Americans who are one emergency away from financial collapse, the Charles Koch Foundation recently released a commercial thatranked a near-poverty-level $34,000 family among the Top 1% in the world. The Economic Policy Institute calculated that a U.S. family of three would require an average of about $48,000 a year to meet basic needs.

Charles Koch wants to eliminate the minimum wage, apparently believing that “economic freedom” applies to people struggling to survive on a minimum wage annual income of $14,500. He sermonizes, “Anything that people with limited capital can do to raise themselves up, they keep throwing obstacles in their way. And so we’ve got to clear those out. Or the minimum wage. Or anything that reduces the mobility of labor.”

Regarding that $14,500 per year, each Koch brother made that much from his 2012investment income in 17 seconds at the office.

The Koch Brothers’ contribution of millions of dollars to higher education, at first glance a magnanimous gesture, betrays less noble motives upon examination. The funding comes with a stipulation for control over faculty hiring and curriculum. As an extension of think tank media control, Koch’s surreptitious entry into over 150 colleges has guided academic decisions toward a libertarian, Ayn-Rand-like philosophy. As an example, an agreement with Florida State University stated, “Professorship Positions will be recruited and hired in a manner consistent with both the…Faculty Handbook and CGK Foundation’s intent to support the…Program.”

I believe my business and non-profit investments are much more beneficial to societal well-being than sending more money to Washington. — Charles Koch

Charles Koch may believe he can best decide how people should live. He insists that “Much of what the government spends money on does more harm than good.” But asThinkProgress notes, Koch’s investments “at best advance Koch’s political ideology and at worst misinform American voters. Either way, they are hardly a replacement for ‘government spend[ing]’ on things like food assistance and basic medical service.”

Charles Koch offered a definition of integrity: “When the other person is vulnerable and you’re in a position to take advantage of them and you don’t do it.”

According to a 1989 report by the Senate Committee on Indian Affairs, “Koch Oil, the largest purchaser of Indian oil in the country, was engaged in a widespread and sophisticated scheme to steal crude oil from Indians and others through fraudulent mismeasuring and reporting.”

Charles elaborated on his business management philosophy: “Every leader needs to be a role model for these principles, because people will spot hypocrisy a mile away.”