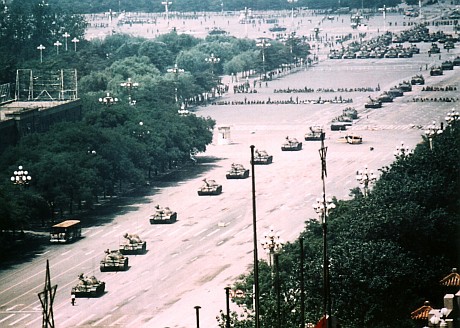 A long view of the ‘Tank Man’ near Tiananmen Square in 1989. (Credit: Stuart Franklin / cc / wikimedia)

There are some essential lessons we can learn from the student occupation of Beijing’s Tiananmen Square, which took place 25 years ago. The 1989 protests began as a demonstration by university students to mourn the death of Hu Yaobang, the reformist Communist Party chief who had been forced out by Deng Xiaoping. The protests swiftly expanded to include demands for an end to corruption, for press freedom and for democracy. At their height, perhaps a million people were in the square. The protests were crushed on the night of June 3-4 when some 200,000 soldiers, backed by tanks and armored personnel carriers, attacked. Hundreds, perhaps thousands, of unarmed demonstrators were killed.

Lesson No. 1. A nonviolent movement that disrupts the machinery of state and speaks a truth a state hopes to suppress has the force to terrify authority and create deep fissures within the power structure. The ruling elites in China, we now know from leaked internal documents and the work of a handful of historians, believed the protests had the potential to dislodge them from power. Monolithic power, as we saw in China, is often a mirage. Some of the internal documents that exposed the fears and deep divisions within the ruling elite have been collected by the Princeton University Library.

Lesson No. 2. An uprising or a revolution usually follows a period of relative prosperity and liberalization. It is ignited not by the poor but by middle-class and elite families’ sons and daughters, often college-educated, whom Mikhail Bakunin called déclassé intellectuals, and who are being denied opportunities to advance socially and economically.

This is what happened in China. Chairman Mao Zedong’s death in 1976 saw Deng Xiaoping assume leadership. Deng instituted political and free market reforms. The reforms created a new oligarchy. It led to widespread corruption, especially among the party elites. For workers there was a loss of job security and social benefits, including medical care and subsidized housing. University graduates were no longer guaranteed jobs, and many could not find employment.

The political liberalization that followed the terror of the Cultural Revolution expanded internal freedoms. A mixture of declining expectations, especially among college graduates, and the political opening provided the classic tinder for revolt. Political theorists such as James C. Davies and Crane Brinton have found that a period of relative liberalization coupled with declining prospects for advancement commonly precedes revolutions.

Once a regime abolishes civil liberties and acts in the middle of an uprising to restore “order,” resistance becomes more dangerous. The Chinese government, after suffering more than a month of protests, declared martial law on May 20, 1989. Nonviolent mass demonstrations, while costly in human terms, often are more effective in totalitarian societies. Fear and forced submission to power are the only weapons left in the arsenal of the ruling class at such a point; when people are no longer afraid, the regime loses control.

Lesson No. 3. Radical mass movements often begin by appealing respectfully to authority for minimal reforms. The students, gathering in Tiananmen Square to mourn Hu, asked that the Chinese constitution, with its guarantees of rule of law and freedom of speech, be respected. Radicalization within the movement happened in the midst of the demonstrations. Once a movement educates itself about structures of power, and once those in state authority display their indifference to the tepid demands of the demonstrators, a movement becomes bolder and wiser. The Tiananmen Square occupation, begun as a spontaneous reaction to a death, swiftly evolved into a revolt. Students eventually drafted what became known as the Seven Demands. These were:

—Affirm as correct Hu Yaobang’s views on democracy and freedom;

—Admit that the campaigns against spiritual pollution and bourgeois liberalization had been wrong;

—Publish information on the incomes of state leaders and their family members;

—End restrictions on demonstrations in Beijing;

Lesson No. 4. Once déclassé intellectuals make alliances with the working class a regime is in serious danger. The protest by the students resonated throughout China. Thousands of people, many from the working class, held their own demonstrations in cities across the country. Workers in Beijing rallied to the students. The state’s relentless demonization of the protesters, something we saw in the United States in response to actions of the Occupy movement, was aimed primarily at preventing a student/worker alliance. Once the crackdown was complete, many workers who had taken part were executed. Student leaders, who came from families with connections and privilege, were usually given prison sentences.

Lesson No. 5. The most potent weapon in the hands of nonviolent rebels is fraternizing with and educating civil servants as well as the police and soldiers, who even though they suffer from the same economic inequality usually are under orders to crush protest. This demands a counterintuitive response from protesters. They must show respect and even compassion to forces deployed to stop the rebellion. Demonstrators are required to exercise tremendous self-discipline as they endure acts of violence and repression. They must refuse to retaliate. If bonds of sympathy are established between protesters and some of the police and soldiers, the ruling elites are unsure whether they can trust the security apparatus to obey. This engenders paralysis within the centers of power. In China the ruling Communist Party watched in dismay May 20 as the initial military assault to crush the protesters failed. Thousands of people surrounded military vehicles. They spoke to the soldiers about the reasons for the protests. They offered them food and water and invited them into their homes. Friendships were formed. The protesters and their supporters built so much solidarity with the soldiers that the government was forced to withdraw the military from Beijing four days later.

Lesson No. 6. When a major authority figure, even in secret, denounces calls to crush a resistance movement the ruling elites are thrown into panic. Maj. Gen. Xu Qinxian, leader of the 38th Group Army, refused to authorize an attack on the unarmed protesters in the square, saying, “I’d rather be beheaded than be a criminal in the eyes of history,” according to the historian Yang Jisheng. He was stripped of his command and arrested. His refusal sent shock waves throughout the rulers, especially after seven senior commanders signed a petition that called on the leadership to withdraw the troops. In many uprisings the ruling elites, after members of their inner circle defect, see distrust and potential disobedience among other authority figures, even those who are loyal. To protect themselves the elites carry out internal purges, such as those conducted in the Soviet Union by Josef Stalin—purges that are self-destructive. One person in authority saying “no” is an effective form of resistance. The elites know that if enough people refuse to co-operate they are doomed. They cannot let this spread.

Lesson No. 7. The state seeks to isolate and indoctrinate soldiers and police before sending them to violently quash any movement. This indoctrination hinges on portraying the protesters as elitists and traitors, often with ties to foreign governments, who do not share the traditional cultural, religious and moral assumptions of the wider population. The Chinese leadership and state press called the demonstrators tools of “bourgeois liberalism.” The government quarantined troops for 10 days outside Beijing and subjected them to daily indoctrination before the final armed attack on Tiananmen Square. State propaganda, while denouncing the protesters as disloyal, portrays the state as the ally of the working class and the defender of traditional values. Any successful mass revolutionary movement, to counter this propaganda, must exhibit respect for the traditional values of society, including religious and patriotic values.

Lesson No. 8. Secrecy is self-destructive to a nonviolent resistance movement. Openness and transparency expose the endemic secrecy and deceit used by regimes to maintain power. Openness inspires confidence in a movement, not only among those within it but among those who sympathize with it. The nature of secrecy is manipulation, the hallmark of despotic power. If people believe they are being manipulated they will distrust a movement and refuse to participate. Secrecy is also an admission of fear, which is what the state wants to instill in those who resist. Finally, the huge resources available to the state to employ informants and carry out surveillance mean that most resistant acts planned in secret are not secret to the state. Only under extreme totalitarian conditions—Nazi Germany or Stalinism—can secrecy be justified by protesters. But even then it rarely works.

Lesson No. 9. The state on the eve of breaking a rebellion with force seeks to make police and soldiers frightened of the protesters. It does this by sending in agents provocateurs to direct acts of violence against symbols of state authority. It is imperative to the state that police and soldiers believe they are in mortal danger, especially when the state is demanding that they use deadly force to quell an uprising. Indoctrinated soldiers sent into Tiananmen Square in June of 1989 believed they would come under fire from armed dissidents or disloyal army units.

Lesson No. 10. After deadly force is used to end a revolt, which happened when Deng Xiaoping sent more than 200,000 soldiers to gun down protesters in Beijing, the state invests tremendous energy to foster historical amnesia. Those in China who seek to remember the uprising—even 25 years later—are silenced. Parents whose sons or daughters were killed in the military assault on Tiananmen Square are forbidden to openly mourn. It is imperative to the ruling elites that the true historical narrative be erased. The use of deadly force against unarmed citizens exposes the tyranny of the state and therefore must be banished from memory.

Lesson No. 11. Once a movement is put down, wholesale retribution occurs. It is estimated that 4 million people were investigated by state security after the Tiananmen Square massacre on suspicion of involvement in the protests. An additional 1 million government employees were investigated. Tens of thousands, perhaps hundreds of thousands, were arrested and sent to labor camps. Many were executed.

Lesson No. 12. Nonviolence does not protect demonstrators from violence. It also does not always succeed. Nonviolence requires—despite what those who advocate violence contend—deep reserves of physical and moral courage. State violence is defeated through the refusal to be afraid, even after violence is used by the state to stamp out protests, and through continuing acts of nonviolent resistance. The goal is to show that violence will not work. But like hundreds of protesters in Tiananmen, many in the first generation of rebels may perish in the process. The generation that begins a revolt often does not live to see its conclusion.