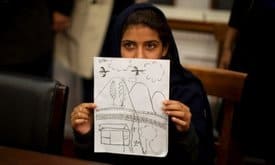 Nabila Rehman, 9, holds up a picture she drew depicting the US drone strike on her Pakistan village which killed her grandmother.
(Photograph: Jason Reed/Reuters)

“I wasn’t scared of drones before, but now when they fly overhead I wonder, ‘Will I be next?’” That is the question asked by 8-year-old Nabila Rehman, from northwest Pakistan. She was injured in a drone attack a year ago, in her small village of Ghundi Kala. She saw her grandmother, Mamana Bibi, blown to pieces in the strike. Her brother Zubair also was injured. Their case has become the latest to draw attention to the controversial targeted killing program that has become central to President Barack Obama’s foreign policy and global war-making.

“We really just have a very simple message to the U.S.: How do you justify killing a grandmother? How does that make anyone safer?” Mustafa Qadri posed the question on the “Democracy Now!” news hour. Qadri authored a new Amnesty International report titled “‘Will I Be Next?’ U.S. Drone Strikes in Pakistan.”

Nabila and Zubair are unique among the growing number of drone-strike victims: They were able to appear before Congress, along with their father, Rafiq ur Rehman, to testify about the strike and the devastation it brought to their family. They are featured in a new documentary being released for free on the Internet this week, “Unmanned: America’s Drone Wars,” by Brave New Films. In it, Rafiq, a primary-school teacher, describes that day:

“People enjoyed life before the attacks. It was 2:45 on October 24th of 2012. After school finished I went into town to buy school supplies.” When he returned home, they told him his mother was dead. There was a crater where her garden was. She was picking okra with the children. “That’s where my mother was killed,” Rafiq continues. “My family has been destroyed since my mother was killed.” Nine children in all were injured, as this drone strike fit a typical pattern, with one initial strike, followed closely by another to hit the rescuers.

Before Congress, 13-year-old Zubair testified: “When the drone fired the first time, the whole ground shook and black smoke rose up. The air smelled poisonous. We ran, but several minutes later the drone fired again. People from the village came to our aid and took us to the hospital. We spent the night in great agony at the hospital, and the next morning I was operated on.”

Attacking rescuers is a war crime. Mustafa Qadri from Amnesty International explained: “For example, some laborers in a very impoverished village near the Afghanistan border, they get targeted, eight die instantly in a tent; those who come to rescue or to look for survivors are themselves targeted. In great detail, eyewitnesses, victims who survive, tell us about the terror, the panic, as drones hovered overhead. … There’s a very high threshold for proving [war crimes]. With the secrecy surrounding the program, the remoteness of this area, we can only get the truth once the U.S. comes clean and explains what is the justification for these killings.”

President Obama himself consistently defends the accuracy and legality of the targeted killing program. He was directly challenged on it recently, though, by his own 16-year-old human-rights hero, Malala Yousafzai. She is the Pakistani schoolgirl who was shot in the head by Taliban gunmen for her outspoken support for educating girls and women. Many thought she would win this year’s Nobel Peace Prize. While the White House did not publicize her comments, Malala released a separate statement about her visit with the Obamas, saying, “I also expressed my concerns that drone attacks are fueling terrorism. Innocent victims are killed in these acts, and they lead to resentment among the Pakistani people. If we refocus efforts on education it will make a big impact.”

Resistance to Obama’s drone wars is growing. In upstate New York, in a surprise ruling, five anti-drone activists were acquitted after being tried for blocking the gate of Hancock Field Air National Guard Base near Syracuse. Code Pink is organizing a national conference in Washington, D.C., on Nov. 16-17, called “Drones Around the Globe: Proliferation and Resistance.” And at least one drone pilot, Brandon Bryant, a former sensor operator for the U.S. Air Force Predator program, has now spoken out about the horrors of killing innocent civilians and the post-traumatic stress disorder that followed.

While only five members of Congress (all Democrats) came to hear the Rafiq family testify, the words of young Zubair are now on the record, a painful testament to Obama’s policy of so-called targeted killing with drones:

“I no longer love blue skies. In fact, I now prefer gray skies. The drones do not fly when the skies are gray. And for a short period of time, the mental tension and fear eases. When the skies brighten, though, the drones return, and so, too, does the fear.”