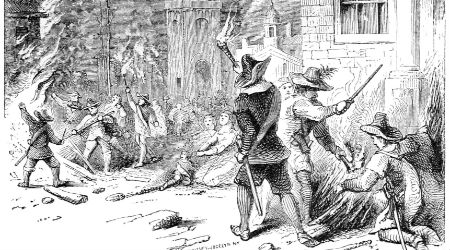 “He can’t possibly win the nomination,” is the phrase heard most often when Washington insiders mention either Donald Trump or Bernie Sanders.

Yet as enthusiasm for the bombastic billionaire and the socialist senior continues to build within each party, the political establishment is mystified.

Political insiders don’t see that the biggest political phenomenon in America today is a revolt against the “ruling class” of insiders that have dominated Washington for more than three decades.

In two very different ways, Trump and Sanders are agents of this revolt. I’ll explain the two ways in a moment.

Don’t confuse this for the public’s typical attraction to candidates posing as political outsiders who’ll clean up the mess, even when they’re really insiders who contributed to the mess.

What’s new is the degree of anger now focused on those who have had power over our economic and political system since the start of the 1980s.

Included are presidents and congressional leaders from both parties, along with their retinues of policy advisors, political strategists, and spin-doctors.

Most have remained in Washington even when not in power, as lobbyists, campaign consultants, go-to lawyers, financial bundlers, and power brokers.

The other half of the ruling class comprises the corporate executives, Wall Street chiefs, and multi-millionaires who have assisted and enabled these political leaders – and for whom the politicians have provided political favors in return.

America has long had a ruling class but the public was willing to tolerate it during the three decades after World War II, when prosperity was widely shared and when the Soviet Union posed a palpable threat. Then, the ruling class seemed benevolent and wise.

Yet in the last three decades – when almost all the nation’s economic gains have gone to the top while the wages of most people have gone nowhere – the ruling class has seemed to pad its own pockets at the expense of the rest of America.

We’ve witnessed self-dealing on a monumental scale – starting with the junk-bond takeovers of the 1980s, followed by the Savings and Loan crisis, the corporate scandals of the early 2000s (Enron, Adelphia, Global Crossing, Tyco, Worldcom), and culminating in the near meltdown of Wall Street in 2008 and the taxpayer-financed bailout.

Along the way, millions of Americans lost their jobs their savings, and their homes.

Meanwhile, the Supreme Court has opened the floodgates to big money in politics wider than ever.  Taxes have been cut on top incomes, tax loopholes widened, government debt has grown, public services have been cut. And not a single Wall Street executive has gone to jail.

The resulting fury at ruling class has taken two quite different forms.

On the right are the wreckers. The Tea Party, which emerged soon after the Wall Street bailout, has been intent on stopping government in its tracks and overthrowing a ruling class it sees as rotten to the core.

Its Republican protégés in Congress and state legislatures have attacked the Republican establishment. And they’ve wielded the wrecking balls of government shutdowns, threats to default on public debt, gerrymandering, voter suppression through strict ID laws, and outright appeals to racism.

Donald Trump is their human wrecking ball. The more outrageous his rants and putdowns of other politicians, the more popular he becomes among this segment of the public that’s thrilled by a bombastic, racist, billionaire who sticks it to the ruling class.

On the left are the rebuilders. The Occupy movement, which also emerged from the Wall Street bailout, was intent on displacing the ruling class and rebuilding our political-economic system from the ground up.

Occupy didn’t last but it put inequality on map. And the sentiments that fueled Occupy are still boiling.

Bernie Sanders personifies them. The more he advocates a fundamental retooling of our economy and democracy in favor of average working people, the more popular he becomes among those who no longer trust the ruling class to bring about necessary change.

Yet despite the growing revolt against the ruling class, it seems likely that the nominees in 2016 will be Jeb Bush and Hillary Clinton. After all, the ruling class still controls America.

But the revolt against the ruling class won’t end with the 2016 election, regardless.

Which means the ruling class will have to change the way it rules America. Or it won’t rule too much longer.