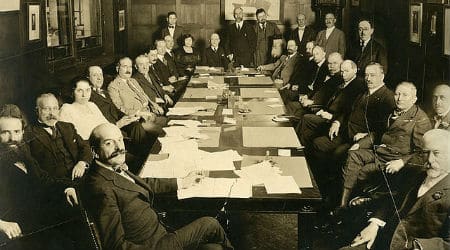 The labor movement won big in the defeat of the trade package Friday. But a lot of the commentators are somewhat mystified.

After all, the labor movement is a smaller fraction of the workforce than it was when NAFTA was approved over labor’s opposition in 1993. And the industrial workforce today is a much smaller percentage of the total. How could this have happened?

Noam Scheiber, writing (an excellent piece) in the New York Times quotes a puzzled John Murphy, senior vice president of the U.S. Chamber of Commerce, which suffered a big loss when the trade deal went down. Murphy wondered why service sector unions were part of the opposition. “None of these workers are in any way negatively affected by competition with imports,” said he. “Yet SEIU will be there, showing solidarity.”

Well, he was right about the solidarity. But if inside players and media commentators are a little confused about the deeper dynamics of failed deals like the Trans-Pacific Partnership and the surprising strength of the labor movement, consider this:

The TPP was never primarily a trade deal. The Administration marketed it as a trade deal; and for the most part, the press bought the storyline.

The Washington Post editorial page, which has long repeated the official line about trade, explaining the tactical vote by Democrats against Trade Adjustment Assistance,opined: “Apparently opponents despise free trade even more than they like helping its purported victims.”

Obviously, if this was about free trade, and industrial workers get hurt by low-wage imports, it logically follows that the labor movement opposes “free trade” in its role as a narrow interest group. And if the Democrats in Congress deserted their president, it must because they got strong-armed by union bosses.

As Politico wrote, “Labor won. It wrote letters. It froze donations. It rallied in the districts of undecideds. It did everything in its power to thwart the trade agenda of a White House with which it’s usually allied.

Yes, Labor went all out. Except, that’s not quite the whole story.

The proposed TPP was the latest in a series of deals that are mostly about the use of “trade” agreements to allow corporations to do end runs around national regulation. This is basically special interest legislation for elites. TPP, like NAFTA, included measures, such as sweetheart patent deals, that never could have won passage as separate legislation. The real interest group here is the corporate elite.

TPP is part of a broad ideology and set of ploys that reflects corporate dominance of the agenda. Public employees, such as those represented by SEIU, care about this, not just out of solidarity (though that’s important), but because “trade” deals have been used to promote privatization schemes and weaken financial regulation and create corporate hegemony sponsored by presidents from both parties. TPP is emblematic of the political domination by the one percent.

The labor movement is not motivated just by the loss of factory jobs but by the entire ideological assault on the security of ordinary wage earners and consumers. The picture of labor as a narrow interest group makes sense only if you buy the propaganda that TPP is mainly a trade deal.

The unions were in high gear on trade — but it’s preposterous to think that the labor movement could browbeat a majority of House Democrats if most Democrats in Congress were not already sick of being strong-armed by corporate elites and Democratic presidents in thrall to them.

The real story here is a deep and principled split between the Congressional wing of the Democratic Party, most of whose members are still fairly progressive, and a presidential wing that has been in bed with Wall Street at least since Bill Clinton and Bob Rubin (who among his many other roles is the mentor and patron of Obama’s top trade official, Mike Froman.)

House Democratic Leader Nancy Pelosi, for one, has loyally backed President Obama despite White House missteps on financial reform, Medicare, and a disastrous embrace of austerity economics via the 2010 Bowles Simpson Commission (at the expense of a second stimulus package pushed by Pelosi that the White House sabotaged.)

Going against the wishes of her closest allies, Pelosi gamely tried to bridge differences between Obama and the Democratic Caucus on the trade deal, until it was clear that the differences were just not bridgeable. Only then did she side with a large majority of her colleagues.

The unions only “made” most House Democrats do what they were itching to do anyway. And God bless the unions for providing a David-and Goliath counterweight to a far more potent corporate elite.

There is a slight chance that the White House may yet cut some kind of a deal with the Republicans — the main Congressional supporters of special interest corporate deals disguised as free trade. But as much as the U.S. Chamber of Commerce may want the TPP to pass, the Republicans are thoroughly enjoying the spectacle of Obama brought low by members of his own party.

It’s about time that the Democratic rank and file rebelled against the corporate domination of the Democratic presidential party. Last week’s events should ring down the curtain on the era of “trade” deals like NAFTA and TPP.

It’s fine for Republicans and their corporate allies to promote this stuff. We expect it of them. But the 99 percent deserve a party of our own. If a Democratic White House doesn’t get that, this steamrolling is well-deserved. Maybe now we can have a debate in which we discuss how globalization might be used to raise social standards rather than do favors for elites.

Robert Kuttner is co-editor of The American Prospect and a visiting professor at Brandeis University’s Heller School. His latest book is Debtors’ Prison: The Politics of Austerity Versus Possibility.