The Real Irish-American Story Not Taught in Schools 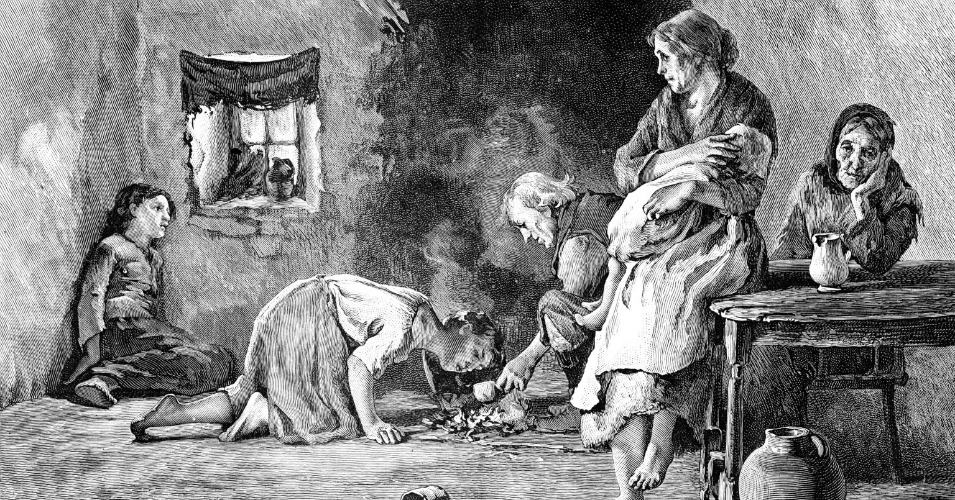 To support the famine relief effort, British tax policy required landlords to pay the local taxes of their poorest tenant farmers, leading many landlords to forcibly evict struggling farmers and destroy their cottages in order to save money. (Sketch: The Irish Famine: Interior of a Peasants Hut)

“Wear green on St. Patrick’s Day or get pinched.” That pretty much sums up the Irish-American “curriculum” that I learned when I was in school. Yes, I recall a nod to the so-called Potato Famine, but it was mentioned only in passing.

Sadly, today’s high school textbooks continue to largely ignore the famine, despite the fact that it was responsible for unimaginable suffering and the deaths of more than a million Irish peasants, and that it triggered the greatest wave of Irish immigration in U.S. history. Nor do textbooks make any attempt to help students link famines past and present.

Yet there is no shortage of material that can bring these dramatic events to life in the classroom. In my own high school social studies classes, I begin with Sinead O’Connor’s haunting rendition of “Skibbereen,” which includes the verse:

… Oh it’s well I do remember, that bleak
December day,
The landlord and the sheriff came, to drive
Us all away
They set my roof on fire, with their cursed
English spleen
And that’s another reason why I left old
Skibbereen.

By contrast, Holt McDougal’s U.S. history textbook The Americans, devotes a flat two sentences to “The Great Potato Famine.” Prentice Hall’s America: Pathways to the Present fails to offer a single quote from the time. The text calls the famine a “horrible disaster,” as if it were a natural calamity like an earthquake. And in an awful single paragraph, Houghton Mifflin’s The Enduring Vision: A History of the American People blames the “ravages of famine” simply on “a blight,” and the only contemporaneous quote comes, inappropriately, from a landlord, who describes the surviving tenants as “famished and ghastly skeletons.” Uniformly, social studies textbooks fail to allow the Irish to speak for themselves, to narrate their own horror.

These timid slivers of knowledge not only deprive students of rich lessons in Irish-American history, they exemplify much of what is wrong with today’s curricular reliance on corporate-produced textbooks.

First, does anyone really think that students will remember anything from the books’ dull and lifeless paragraphs? Today’s textbooks contain no stories of actual people. We meet no one, learn nothing of anyone’s life, encounter no injustice, no resistance. This is a curriculum bound for boredom. As someone who spent almost 30 years teaching high school social studies, I can testify that students will be unlikely to seek to learn more about events so emptied of drama, emotion, and humanity.

Nor do these texts raise any critical questions for students to consider. For example, it’s important for students to learn that the crop failure in Ireland affected only the potato—during the worst famine years, other food production was robust. Michael Pollan notes in The Botany of Desire, “Ireland’s was surely the biggest experiment in monoculture ever attempted and surely the most convincing proof of its folly.” But if only this one variety of potato, the Lumper, failed, and other crops thrived, why did people starve?

Thomas Gallagher points out in Paddy’s Lament, that during the first winter of famine, 1846-47, as perhaps 400,000 Irish peasants starved, landlords exported 17 million pounds sterling worth of grain, cattle, pigs, flour, eggs, and poultry—food that could have prevented those deaths. Throughout the famine, as Gallagher notes, there was an abundance of food produced in Ireland, yet the landlords exported it to markets abroad.

The school curriculum could and should ask students to reflect on the contradiction of starvation amidst plenty, on the ethics of food exports amidst famine. And it should ask why these patterns persist into our own time.

More than a century and a half after the “Great Famine,” we live with similar, perhaps even more glaring contradictions. Raj Patel opens his book, Stuffed and Starved: Markets, Power and the Hidden Battle for the World’s Food System: “Today, when we produce more food than ever before, more than one in ten people on Earth are hungry. The hunger of 800 million happens at the same time as another historical first: that they are outnumbered by the one billion people on this planet who are overweight.”

Patel’s book sets out to account for “the rot at the core of the modern food system.” This is a curricular journey that our students should also be on — reflecting on patterns of poverty, power, and inequality that stretch from 19th century Ireland to 21st century Africa, India, Appalachia, and Oakland; that explore what happens when food and land are regarded purely as commodities in a global system of profit.

But today’s corporate textbook-producers are no more interested in feeding student curiosity about this inequality than were British landlords interested in feeding Irish peasants. Take Pearson, the global publishing giant. At its website, the corporation announces (redundantly) that “we measure our progress against three key measures: earnings, cash and return on invested capital.” The Pearson empire had 2011 worldwide sales of more than $9 billion—that’s nine thousand million dollars, as I might tell my students. Multinationals like Pearson have no interest in promoting critical thinking about an economic system whose profit-first premises they embrace with gusto.

As mentioned, there is no absence of teaching materials on the Irish famine that can touch head and heart. In a role play, “Hunger on Trial,” that I wrote and taught to my own students in Portland, Oregon—included at the Zinn Education Project website— students investigate who or what was responsible for the famine. The British landlords, who demanded rent from the starving poor and exported other food crops? The British government, which allowed these food exports and offered scant aid to Irish peasants? The Anglican Church, which failed to denounce selfish landlords or to act on behalf of the poor? A system of distribution, which sacrificed Irish peasants to the logic of colonialism and the capitalist market?

These are rich and troubling ethical questions. They are exactly the kind of issues that fire students to life and allow them to see that history is not simply a chronology of dead facts stretching through time.

So go ahead: Have a Guinness, wear a bit of green, and put on the Chieftains. But let’s honor the Irish with our curiosity. Let’s make sure that our schools show some respect, by studying the social forces that starved and uprooted over a million Irish—and that are starving and uprooting people today.

Bill Bigelow taught high school social studies in Portland, Ore. for almost 30 years. He is the curriculum editor of Rethinking Schools and the co-director of the Zinn Education Project. This project offers free materials to teach people’s history and an “If We Knew Our History” article series. Bigelow is author or co-editor of numerous books, including A People’s History for the Classroom and The Line Between Us: Teaching About the Border and Mexican Immigration, and most recently, A People’s Curriculum for the Earth: Teaching Climate Change and the Environmental Crisis.