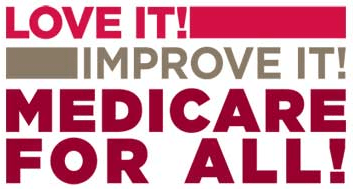 (Image by National Nurses United, Medicare for All campaign)

Lost amidst the well-chronicled travails of the Affordable Care Act rollout are the long term effects of people struggling to get the health coverage they need without going bankrupt.

If that sounds familiar, it’s because that’s been the main story line of the US healthcare system for several decades. Sadly, little has changed.

Still, with all the ACA’s highly publicized snafus, and less discussed systemic flaws, there’s no reason to welcome the cynical efforts to repeal or defund the law by politicians whose only alternative is more of the same callous, existing market-based healthcare system.

US nurses oppose the rollback and appreciate that several million Americans who are now uninsured may finally get coverage, principally through the expansion of Medicaid, or access to private insurance they’ve been denied because of their prior health status.

At the same time, nurses will never stop campaigning for a fundamental transformation to a more humane single-payer, expanded Medicare for all system not based on ability to pay and obeisance to the policy confines of insurance claims adjustors.

Website delays – the most unwelcome news for computer acolytes since the tech boom crashed – are not the biggest problem with the ACA, as will become increasingly apparent long after the signup headaches are a distant memory.

What prompted the ACA was a rapidly escalating healthcare nightmare, seen in 50 million uninsured, medical bills plunging millions into un-payable debt or bankruptcy, long delays in access to care, and record numbers skipping needed treatment due to cost.

The main culprit was our profit-focused system, with rising profiteering by a massive health care industry, and an increasing number of employers dropping coverage or just dumping more costs onto workers.

The ACA tackles some of the most egregious inequities: lack of access for many of the working poor who will now be eligible for Medicaid or subsidies to offset some of their costs for buying private insurance through the exchanges, a crackdown on several especially notorious insurance abuses, and encouragement of preventive care.

Some consumers who have made it through the website labyrinth have found confusing choices among plans which vary widely in both premium and out of pocket costs even with the subsidies, a pass through of public funds to the private insurers.

The minimum benefits are also somewhat illusory. Insurance companies have decades of experience at gaming the system and warehouses full of experts to design ways to limit coverage options.

The ACA allows insurers to cherry pick healthier enrollees by the way benefit packages are designed, and as a Washington Post article noted on 21 November, consumers are discovering insurers are restricting their choice of doctors and excluding many top ranked hospitals from their approved “network”.

The wide disparity between the healthcare you need, what your policy will cover, and what the insurer will actually pay for remains.

Far less reported is what registered nurses increasingly see – financial incentives within the ACA for hospitals to prematurely push patients out of hospitals to cheaper, less regulated settings or back to their homes. It also encourages shifting more care delivery from nurses and doctors to robots and other technology that undermines individual patient care, and that may work no better than the dysfunctional ACA websites.

Is there an alternative? Most other developed nations have discovered it, a single-payer or national healthcare system.

Without the imperative of prioritizing profits over care, Medicare for all streamlines the administrative waste and complex insurance billing operations endemic to private insurance. That waste is a major reason why the US has more than double the per capita cost of healthcare of other developed nations, yet lower life expectancies than many.

Medicare for all eliminates the multi-tiered health plans that plague both the individual and group insurance markets that are tied to the girth of your wallet not your need for care. Class, gender, and racial disparities in access and quality of care vanish under Medicare for all.

It’s beyond time that we stop vilifying government and perpetuating a corporatized healthcare system that has abandoned so many. We can, with a system of Medicare for all, we can cut healthcare costs and promote a much more humane society.

Rose Ann DeMoro is executive director of the 185,000-member National Nurses United, the nation’s largest union and professional association of nurses, and a national vice president of the AFL-CIO. Follow Rose Ann DeMoro on Twitter: www.twitter.com/NationalNurses