The Prince: Meet the Man Who Co-Opted Democracy in the Middle East 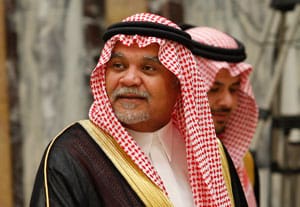 Now that the Arab Spring has been turned into a totally owned subsidiary of the Saudi royal family, it is time to honor Prince Bandar bin Sultan as the most effective Machiavellian politician of the modern era. How slick for this head of the Saudi Intelligence Agency to finance the Egyptian military’s crushing of that nation’s first-ever democratic election while being the main source of arms for pro-al-Qaida insurgents in Syria.

Just consider that a mere 12 years ago, this same Bandar was a beleaguered Saudi ambassador in Washington, a post he held from 1983 to 2005, attempting to explain his nation’s connection to 15 Saudi nationals who had somehow secured legal documents to enter the U.S. and succeeded in hijacking planes that blew up the World Trade Center and the Pentagon and crashed into a field in Pennsylvania. How awkward given that the Saudi ambassador had been advocating that U.S. officials go easy on the Taliban government in Afghanistan, where those attacks incubated.

The ties between Saudi Arabia and the alleged al-Qaida terrorist attacks were manifest. The terrorists were followers of the Saudi-financed branch of Wahhabi Islam and their top leader, Osama bin Laden, was a scion of one of the most powerful families in the Saudi kingdom, which, along with the United Arab Emirates and Pakistan, had been the only three nations in the world to recognize the legitimacy of the Taliban government in Afghanistan that provided sanctuary to al-Qaida. Yet Bandar had no difficulty arranging safe passage out of Washington for many Saudis, including members of the bin Laden family that U.S. intelligence agents might have wanted to interrogate instead of escorting them to safety back in the kingdom.

But the U.S. war on terror quickly took a marvelous turn from the point of view of the Saudi monarchy. Instead of focusing on those who attacked us and their religious and financial ties to the Saudi royal family, the U.S. began a mad hunt to destroy those who had absolutely nothing to do with the assaults of 9/11.

Saddam Hussein in Iraq came quickly to mind, even though he had brutally crushed the al-Qaida efforts in his own country. But Hussein had earlier made the mistake of attacking the oil sheikdom of Kuwait, an acquiescent ally of the U.S. and Saudi Arabia. Suddenly, a second war against Iraq was in order. The result was to vastly increase the power of Iran in Iraq and the region, but mistakes happen.

Now Iran is once again firmly established as the main enemy of freedom, despite the annoying fact that the Shiite leadership had nothing to do with those 9/11 attacks. And even though many of the folks attempting to overthrow the government in Syria are sympathetic to al-Qaida, the Assad government’s connection with Iran trumps that concern for U.S. hawks. The Saudis have the wherewithal to buy our very expensive war toys; need we say more?

It is now time for the Saudi Spring, and as The Wall Street Journal on Sunday detailed the monarchy’s well-financed effort to shape the region’s politics to its liking, “… Saudi Arabia’s efforts in Syria are just one sign of its broader effort to expand its regional influence. The Saudis also have been outspoken supporters of the Egyptian military in its drive to squelch the Muslim Brotherhood, backing that up with big chunks of cash.”

That big chunk of cash, $12 billion from the UAE, Kuwait and Saudi Arabia, is not aimed at stopping terrorism, if by that we mean the sort of attacks associated with 9/11 and al-Qaida. As the Journal story reminded, “A generation ago, Prince Bandar, in a role foreshadowing his current one on behalf of Syrian opposition, helped the CIA arm the Afghan rebels who were resisting occupation by Soviet troops.” That’s how the Saudi bin Laden came to be in Afghanistan. Earlier, Bandar had been involved in the CIA’s effort to deliver arms from Iran to the Contras in Nicaragua.

Can you imagine the blowback from the prince’s current efforts to get the United States to once again meddle madly in a region that we don’t care to comprehend? Why not ask Republican Sens. John McCain and Lindsey Graham who, according to the Journal, met with Bandar in September to urge the Saudis to provide the Syrian rebels with more potent weapons.

Or ask Sen. Dianne Feinstein, the Democratic chair of the Senate Intelligence Committee, who was among those courted by Bandar. As the Journal described the Saudi junket by members of the congressional intelligence committees, “They [the Saudis] arranged a trip for committee leaders to Riyadh, where Prince Bandar laid out the Saudi strategy. It was a reunion of sorts, officials said, with Dianne Feinstein (D., Calif.) warmly scolding Prince Bandar about his smoking.”

How cozy. Perhaps next time they buddy up, the chair of the Senate Intelligence Committee can find time to chide the prince about his consistently bad advice to Americans on fighting terrorism.