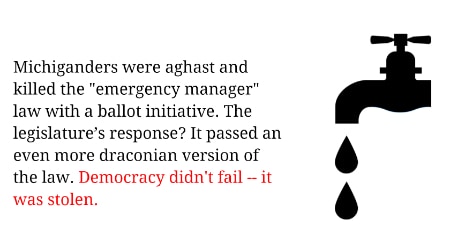 The poisoning of the people of Flint, Mich., is a failure of government at its worst, and the finger-pointing will turn into a blood sport. There already are calls for the state’s governor, former Gateway Computers executive andventure capitalist Rick Snyder, to resign, and some are urging criminal investigationsinto the motives and knowledge of those who let Flint residents, including young children at elevated risk, drink lead-contaminated water.

There is plenty of blame to go around (there’s a good overview here). Snyder on Wednesday released emails connected with the crisis, and they reveal state officials’utter disregard for the problems evolving in Flint. And once it was apparent the issue wasn’t going to trickle away, they began calculating the political implications. One thing the emails make clear: The state government’s abject failure to confront a clear crisis in a responsible, effective way.

So why was this the state of Michigan’s responsibility and not that of the elected leaders of the city of Flint? Because Snyder had trumped local decision-making by installing an emergency manager under a controversial state law that allows the governor to usurp democracy. And like many issues of inequity in Michigan and nationwide, there’s a racial component — it’s been invoked primarily in the state’s poorest and blackest cities.

The undermining of democracy began in 2011, when the Michigan Legislature adoptedPublic Law 4 to grant the governor the power to declare a financial crisis in local governments and appoint an emergency manager to make all financial decisions — which are the underpinnings of everything a city does. Once the manager was appointed, the elected representatives — council members and mayors — lost pretty much all authority to make any decisions at all. And it empowered the manager to void contracts, including those with labor unions.
Michiganders, not surprisingly, were aghast and killed the law through a 2012 ballot initiative. The legislature’s response? It passed an even more draconian version of the law and embedded a budget appropriation in it, which under Michigan law meant it could not be overturned by referendum. So the elected representatives went directly against the expressed will of the people of the state of Michigan.

And it was the emergency manager appointed under that new law in 2013 who made the bad call in Flint that led to the lead poisoning of its water supply (the issue was brought to light by Curt Guyette, an investigative journalist working for the American Civil Liberties Union of Michigan).

Cause and effect between the emergency manager law and the Flint crisis? Not necessarily. But among the warning signs that all was not right with Flint’s water were complaints by residents that it tasted funny and was causing problems. Those kinds of complaints usually end up on a mayor’s desk, or in public comment sessions at city council meetings, where the people who make the decisions are accountable to those who are lodging the complaints.

In Flint, the decision-maker was accountable not to the people of Flint, but to the governor who appointed him.

So where is that emergency manager, Darnell Earley, now? Snyder placed him in charge of the Detroit Public Schools, where teachers have resorted to sickoutsto draw attention to the appalling physical condition of buildings and classrooms, including mold infestations, vermin, broken or inadequate heating systems and other basic maintenance problems that have been ignored. Low pay and limited raises, plus more looming state-directed reforms, have led to resignations, early retirements and a teacher shortage.

As in Flint, under the emergency manager system there’s no one to be held politically accountable. Democracy didn’t fail — it was stolen.