The Police State Mindset in Our Public Schools

“Is it surprising that prisons resemble factories, schools, barracks, hospitals, which all resemble prisons?” – Michel Foucault 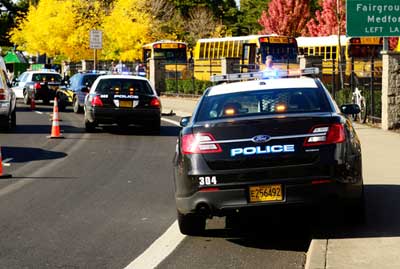 Once upon a time in America, parents breathed a sigh of relief when their kids went back to school after a summer’s hiatus, content in the knowledge that for a good portion of the day their kids would be gainfully occupied, out of harm’s way and out of trouble. Those were the good old days, before school shootings became a part of our national lexicon and schools, aiming for greater security, transformed themselves into quasi-prisons, complete with surveillance cameras, metal detectors, police patrols, zero tolerance policies, lock downs, drug sniffing dogs and strip searches.

Unfortunately, somewhere along the way, instead of making the schools safer, we simply managed to make them more authoritarian. It used to be that if you talked back to a teacher, or played a prank on a classmate, or just failed to do your homework, you might find yourself in detention or doing an extra writing assignment after school. Nowadays, students are not only punished for transgressions more minor than those—such as playing cops and robbers on the playground, bringing LEGOs to school, or having a food fight—but they are punished with suspension, expulsion, and even arrest.

As a result, America is now on a fast track to raising up an Orwellian generation—one populated by compliant citizens accustomed to living in a police state and who march in lockstep to the dictates of the government. Indeed, as I point out in my book, A Government of Wolves: The Emerging American Police State, with every school police raid and overzealous punishment that is carried out in the name of school safety, the lesson being imparted is that Americans—especially young people—have no rights at all against the state or the police. In fact, the majority of schools today have adopted an all-or-nothing lockdown mindset that leaves little room for freedom, individuality or due process.

For example, when high school senior Ashley Smithwick grabbed the wrong lunch sack—her father’s—on the way to school, the star soccer player had no idea that her mistake would land her in a sea of legal troubles. Unbeknownst to Ashley, the lunchbox contained her father’s paring knife, a 2-inch blade he uses to cut his apple during lunch. It was only when a school official searching through students’ belongings found the diminutive knife, which administrators considered a “weapon,” that Ashley realized what had happened and explained the mistake. Nevertheless, school officials referred Ashley to the police, who in turn charged her with a Class 1 misdemeanor for possessing a “sharp-pointed or edged instrument on educational property.”

Tieshka Avery, a diabetic teenager living in Birmingham, Alabama, was slammed into a filing cabinet and arrested after falling asleep during an in-school suspension. The young lady, who suffers from sleep apnea and asthma, had fallen asleep while reading Huckleberry Finn in detention. After a school official threw a book at her, Avery went to the hall to collect herself. While speaking on the phone with her mother, she was approached from behind by a police officer, who slammed her into a filing cabinet and arrested her. Avery is currently pursuing a lawsuit against the school.

In May 2013, seven students at Enloe High in Raleigh, North Carolina, were arrested for throwing water balloons as part of a school prank. One parent, who witnessed police slamming one of the arrested students on the ground, was also arrested for attempting to calmly express his discontent with the way the students were being treated.

Unfortunately, while these may appear to be isolated incidents, they are indicative of a nationwide phenomenon in which children are treated like criminals, especially within the public schools. The ramifications are far-reaching. As Emily Bloomenthal, writing for the New York University Review of Law & Social Change, explains:

Studies have found that youth who have been suspended are at increased risk of being required to repeat a grade, and suspensions are a strong predictor of later school dropout. Researchers have concluded that “suspension often becomes a ‘pushout’ tool to encourage low-achieving students and those viewed as ‘troublemakers’ to leave school before graduation.” Students who have been suspended are also more likely to commit a crime and/or to end up incarcerated as an adult, a pattern that has been dubbed the “school-to-prison pipeline.”

Moreover, as suspensions and arrests for minor failings and childish behavior become increasingly common, so does the spread of mass surveillance in our nation’s schools. In fact, our schools have become a microcosm of the total surveillance state which currently dominates America, adopting a host of surveillance technologies, including video cameras, finger and palm scanners, iris scanners, as well as RFID and GPS tracking devices, to keep constant watch over their student bodies.

For example, in May 2013, Polk County School District in Florida foisted an iris scanning program on its students without parental consent. Parents were sent a letter explaining they could opt their children out of the program, but by the time the letter had reached parents, 750 children had already had their eyes scanned and their biometric data collected.

Making matters worse, these iris scanning programs are gaining traction in the schools, with school buses even getting in on the action. As students enter the school bus, they will be told to look through a pair of binocular-like scanners which will either blink, indicating that the student is on the right bus, or honk, indicating that they’ve chosen the wrong one. This technology is linked with a mobile app which parents can use to track their child’s exact whereabouts, as each time their eyes are scanned the parent receives a print out with their photo and Google map location, along with a timestamp. Benefits aside, the potential for abuse, especially in the hands of those who prey on the young, are limitless.

Insiders expect this emerging industry to expand beyond schools to ATMs, airports, and other high security areas within the next few years. It’s definitely big business. The school security industry, which includes everything from biometrics to video surveillance, was worth $2.7 billion in 2012 and is expected to grow by 80% over the next five years and be worth $4.9 billion by 2017.

Even so, promises of profit, safety and efficiency aside, it doesn’t bode well for our nation’s youth who are being raised in quasi-prisonlike school environments where they are treated as if they have no rights and are taught even less about the Constitution. It has been said that America’s schools are the training ground for future generations. If so, and unless we can do something to rein in this runaway train, this next generation will be the most compliant, fearful and oppressed generation ever to come of age in America, and they will be marching in lockstep with the police state.

Constitutional attorney and author John W. Whitehead is founder and president of The Rutherford Institute. His new book “The Freedom Wars” (TRI Press) is available online at www.amazon.com.