In Cairo, Bloodbaths Are Now a Daily Occurrence 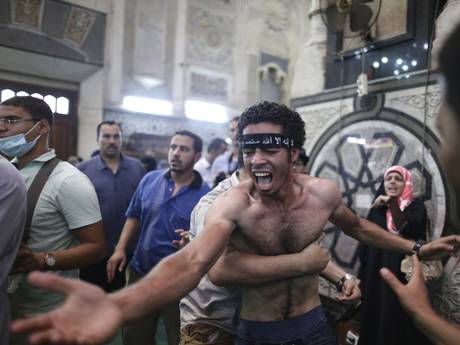 Egyptians mourn over the bodies of their relatives in the Al-Fath mosque. (Photo: AP)

It was a disgrace, a most shameful chapter in Egyptian history. The police – some wearing black hoods – shot down into the crowds of Muslim Brotherhood supporters from the roof of Cairo’s Ramses Street police station and surrounding streets.

They even fired at traffic on the airport highway. And to see their terrible work, you had only to climb the pink marble steps of the Al-Fath Mosque – sticky with fresh blood yesterday evening – and see the acre of wounded lying on deep-woven carpets and, in a remote corner, 25 shrouded corpses. Dr Ibrahim Yamani gently lifted the bandages from their bodies: shot in the face, shot in the head, shot in the chest.

So now we have the Ramses Square Massacre – these bloodbaths seem to come by the week, if not by the day – and even as I left the mosque last night, where praying Muslims knelt beside the moaning wounded, a team of paramedics pounded on the chest of a terribly wounded young man. “We are going to lose him,” one of the other doctors said. So was it now 26 dead? The paramedics talked of exploding bullets, and certainly one man’s head had been half blown away. His face was unrecognisable.

The flies were already gathering, swatted from one corpse by a man in tears who was kneeling on the ground. When they could, the medical staff wrote the names of the dead in crayon on their naked bodies. “Zeid Bilal Mohamed” was scrawled on one chest. The dead still deserve names. The last corpse to be brought into the mosque was that of Ahmed Abdul Aziz Hafez. There were – I couldn’t count after the first 50, but the doctors insisted on the figure – 250 wounded.

What was so extraordinary – not to the crowds, perhaps, for they have grown used to this thuggery – was to see some of the faces of the killers. There was a man with a moustache and close-cropped hair on the roof of the police station waving a pistol in the air and shouting obscenities to crowds on the motorway below him. To his left, a policeman wearing a black hood, crouching by the wall, pointed his automatic rifle at the cars on the highway. One of his bullets passed between my driver and myself, whizzing off into the square.

An hour earlier, I had been chatting to the security police at the burned-out Rabaa Mosque in Nasr City – the scene of Wednesday’s massacre – and one of them, in an all-black uniform, cheerfully told me that “we do the work, and the army watches”. This was one of yesterday’s more important truths. For the army stayed a mile from the slaughter in Ramses Square, sitting atop their spanking clean armoured vehicles. No blood on their spotless uniforms.

For two hours, the police gunfire swept the crowds. Two big police armoured cars appeared several times on an overpass and gunfire spattered down on to the square from two narrow steel turrets perched oddly atop the vehicles. At one point, a machine-gun could be heard firing at the crowd of 20,000, 30,000, and later, perhaps 40,000 people, but certainly not a million as the Brotherhood were to claim. The huge body of people twitched and moved like a bubble towards the mosque.

As the police drove up the overpass, dozens of young men – trapped by their approach – began shimmying down an electrical cable to the ground. But one boy jumped to the top of a tree, missed the highest branches, and fell 30 feet to the ground on his back. Panic, fear, fury – “See how they kill us!” a woman in a scarf shouted at us, not without reason – and, I suppose, a kind of courage seized the crowd. They knew this was going to happen. So did the police. The “government” – I suspect it deserves its quotation marks – told the people 24 hours earlier that any attacks on official buildings would be met with live fire. The cops had all the permission they needed. And all the ammunition.

But let us not be romantic about the Muslim Brotherhood. My colleague Alastair Beach saw a man in the crowd firing a rifle at the police. And I rather think those cops I saw on the roof were as fearful as some among the crowds. And – pardon this streak of cruel cynicism – the Brotherhood probably needed those corpses in the mosque yesterday. A day without martyrdom might suggest that the Brotherhood was finished, that the fire of ideology had indeed been damped down, that the Noor Party – the Salafists who with equally massive cynicism joined the military in crushing Mohamed Morsi’s Muslim Brotherhood-backed presidency last month – might take their place as the only true Islamist right hand of the state, albeit in collaboration with the army.

But there was no excuse for the police. Their behaviour was not, I suppose, undisciplined. They had been told to kill, and kill they did – dozens of people were reported killed in clashes elsewhere in Egypt – and the “security” forces also now, I fear, deserve quotation marks around their title. The word “shame” – aib in Arabic – came to mind as we watched these awful scenes. In the centre of one of the greatest cities in the world, known to millions, scarcely a mile from the magnificence of the Egyptian Museum and the treasures of Tutankhamen, only 200 metres from the Courts of Justice – if “justice” is a word that could be uttered in Cairo yesterday – the police officers whose duty is to safeguard the lives of all Egyptians shot into thousands of their own citizens with the simple aim of killing them. And as they did so, the “Beltagi”, also in hoods, the drug-addicts and ex-cops who now form the praetorian guard of the “security” forces, turned up with rifles beside the police station.

Journalists there were aplenty – not that the police cared, for army helicopters hovered low over the crowds with video cameras, hunting for those all-important images of gunmen amid the people, perhaps the man whom Alastair Beach saw, or the groups of bearded youths who stood in the shade with their mobile phones ringing like grasshoppers. Not that we could hear them. The crack of gunfire drowned out all conversation, as clouds of tear gas swamped the streets, shrouding even the minaret of the Al-Fath Mosque.

Another bloody day, then. Funerals within 24 hours – if Cairo’s only mortuary can issue enough pre-burial death notices – and more “martyrs” for the cause.

I was struck yesterday by the face of one middle-aged man carried by five paramedics into the side door of the mosque. Blood was dribbling down his face on to the floor and pouring off his torso. His eyes were open and he stared at the doctors, the faces no doubt blurring past him on what may have been his last journey in life. And a few cameras clicked and a man said that God was great and the haunting face of the living dead was gone. And this is Egypt, two and a half years after the revolution that was supposed to bring freedom, justice and dignity. Forget democracy for the moment, of course.

Robert Fisk is Middle East correspondent for The Independent newspaper.  He is the author of many books on the region, includingThe Great War for Civilisation: The Conquest of the Middle East.