The Pipeline Strikes Back: The Audacity of TransCanada’s $15B Suit Against the U.S 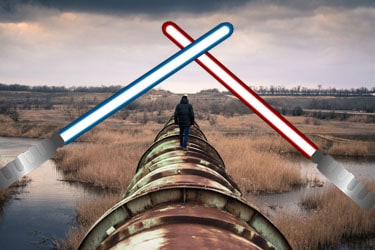 In case you didn’t notice, the new blockbuster Star Wars film, The Force Awakens, ends pretty much the same way the first one did when it came out in the summer of 1977. The bad guys build a Death Star machine that can kill whole planets, the good guys fight back with pluck and grit, and, just in the nick of time, destroy the machine.

The political saga of the Keystone XL pipeline has followed essentially the same plot. TransCanada (playing the role of the Empire) sought to build a metal tunnel from Alberta to the Gulf Coast to transport oil from the Canadian tar sands. The pipeline, not unlike a Death Star, threatened the planet because it would have amped up carbon emissions and quickened the pace of global climate change. In the Keystone saga, pluck and grit came in the form of protests, lawsuits, arrests, and the encirclement of the White House—the equivalent of a Jedi counter-attack.

Those efforts paid off last November, when President Barack Obama announced that he was denying the required U.S. authorization for the pipeline to be built—the political equivalent of blowing up the Death Star’s thermal oscillator.

But as any good Star Wars fan knows, the Empire strikes back. True to form, TransCanada filed a $15 billion legal action against the U.S. government on January 6. The company is demanding that U.S. taxpayers compensate it for the profits it had hoped to make from a pipeline it won’t get to build.

How can the company do this? TransCanada is making use of a legal weapon so powerful that even Darth Vader would be envious—international trade rules.

Here is how the system known as “Investor State Dispute Settlement” works. Tucked neatly away inside the North American Free Trade Agreement (NAFTA) and more than 90 percent of the thousands of other international trade agreements in force around the world are provisions that allow foreign corporations to sue governments whenever a change in policy interferes with the company’s profit-making plans. Companies are allowed to drag governments before closed-door tribunals operated by the World Bank, the International Chamber of Commerce, and others. Companies can force compensation not only for the funds they actually invested, but for many, many times more than that for supposed “lost profits.”

Who uses these secretive tribunals? The San Francisco-based engineering giantBechtel sued Bolivia, the poorest country in South America, after the Cochabamba Water Revolt of 2000. This was a massive public uprising against the privatization of the city’s water and subsequent rate hikes for residents. After protests pushed Bolivia’s leaders to reverse the privatization, Bechtel sued Bolivia for $50 million, although it had invested just $1 million in the project.

In the end, Bechtel was forced to drop its case for a token settlement of less than $1, but that took years of protests and international organizing (in which my organization was involved) to achieve, and cost the Bolivian treasury millions of dollars in legal fees.

Many nations, including Mexico, Canada, the Dominican Republic, and Bolivia have been forced to pay vast sums to foreign companies that used these international investment tribunals.

In this most recent case, TransCanada is suing under the provisions of NAFTA and demanding an amount that would cover annual community college tuition costs for nearly five million U.S. students. In other words, $15 billion is a huge sum of money.

For years, the reason governments have given for granting multinational corporations such enormous legal power was that the companies needed it to protect against seizure of their assets. TransCanada’s claim, however, is not about U.S. soldiers showing up with guns at a pipeline and declaring ownership; it’s about a reasonable political choice to protect the planet’s climate. In the company’s view, however, making a choice they don’t like constitutes a theft.

As a representative of TransCanada recently wrote in the Wall Street Journal, “When the U.S. government signed NAFTA, it committed to provide Canadian investors with various protections against unfair, inequitable, and uncompensated expropriatory and discriminatory U.S. regulatory actions.” In other words, the Obama administration “expropriated” TransCanada’s hopes of making billions off a project that was also a weapon aimed directly at the planet’s future.

International investment rules like these undermine democracy and the right of nations to freely choose their futures, which makes it all the more a mystery why the Obama Administration wants to supersize the system with the 12-nation Trans-Pacific Partnership (TPP). The TPP, which would cover nearly 40 percent of global GDP, essentially copies the investment rules under which TransCanada is suing the United States, a new legal Death Star run amok.

TransCanada’s Keystone XL case should be a warning. The United States is no more immune than Bolivia and El Salvador to multibillion-dollar raids on its treasury any time a change in public policy runs afoul of a company’s plan for profits. Cases like these have even become a commodity market of their own, drawing investors who help finance the legal costs for a share of the big potential payouts. The Obama administration and other boosters of the TPP like to boast about exports and the like, but they never directly answer one simple question: Why it is in the interest of any nation to give foreign companies the right to sue it for lost profits in secretive international tribunals?

As Yoda would say, “Beware of the dark side.” Or at least don’t hand the dark side special legal rights. The battle over the Keystone XL may have had a happy ending in its first episode, but global trade rules have ensured we’ll see a sequel.

Jim Shultz, founder and executive director of The Democracy Center, has led citizen advocacy projects in more than two dozen countries across five continents. He lives with his family in Cochabamba, Bolivia and tweets at @jimshultz.