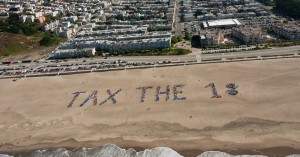 What can we expect Congress to do about America’s staggeringly top-heavy concentration of income and wealth over the next two years? Absolutely nothing.

What do Americans want Congress to do about that concentration? A good bit.

We know the first answer from the simple math of last week’s election results. Republicans now hold a chokehold on both chambers of Congress. No legislation that would even slightly inconvenience America’s awesomely affluent has any chance of even coming up for a vote.

The answer to the second question reflects, in part, exit polling that theWashington Post and other major media outlets jointly conducted on election day. That polling included a suggestive question about the nation’s economy.

“Do you think,” the pollsters asked, “that the U.S. economic system generally favors the wealthy or is fair to most Americans.”

Last Tuesday’s exit polling didn’t probe any deeper than that. The polling didn’t, for instance, ask voters about what they feel elected leaders ought to be doing to tilt the nation in a more equitable direction.

But another important piece of polling, released before last week’s elections, did go deeply into that question.

The researchers behind this little-noticed polling, Berkeley political scientists David Broockman and Douglas Ahler, didn’t set out to explore what Americans want done about inequality. They went looking instead for a better understanding of the “moderate voter.”

Pundits, these two researchers believe, tend to mythologize voter “moderation.” Many Americans, the two posit, support public policy positions more “extreme” than the positions that most Democrats and Republicans in Congress support.

For each issue, the seven choices included the mainstream Democratic and Republican position, as extracted from public statements made by current U.S. senators in news releases, press reports, and online.

In their policy options on taxes, Broockman and Ahler defined this “moderate” position as the status quo: maintain current federal tax rates. The mainstream Democratic position: up taxes about 5 percent on those making over $250,000. The mainstream GOP stance: cut taxes, even for high earners.

On the “extreme” conservative end of the seven policy options on taxes, the Broockman and Ahler survey gave two choices. The “extreme” Senate position: move to a “flat” income tax and have everyone, rich and poor alike, pay taxes at the exact same rate. The more “extreme” position: replace the income tax with a tax on consumption.

And how did the American public react to these seven tax policy options? Just over two-thirds — 67 percent — opted for the three options that involved raising taxes on the rich. Only 22 percent chose any of the conservative tax options.

No prominent elected leader is calling for a 100 percent tax on income over $1 million. Yet this option has a surprising level of public support.

The public support Broockman and Ahler found for what would be, in effect, a “maximum wage” may rate as their survey’s most remarkable finding.

No prominent elected leader in America is currently banging the drums for a 100 percent tax rate on income over $1 million. Yet this option received more support — 13 percent of those surveyed back it — than the “flat tax,” a proposal prominent GOP national figures have been pushing for decades.

Americans overall, this new polling suggests, want a tax system that targets the concentration of income at America’s economic summit. And Americans don’t just make this tax-the-rich preference plain to pollsters. They vote that way, too, whenever they have that opportunity.

Last Tuesday, voters had that opportunity in Illinois. On that state’s ballot: an advisory referendum on the question of whether Illinois should impose a new 3 percent tax on income over $1 million to help improve education funding.

But don’t hold your breath waiting for a millionaire’s tax in Illinois. Political observers see no chance whatsoever that Illinois lawmakers, even with last week’s vote, will seriously consider such a tax in their upcoming session.

And people wonder why so few Americans turn out to vote.

Sam Pizzigati edits Too Much, the Institute for Policy Study’s online weekly newsletter on excess and inequality.