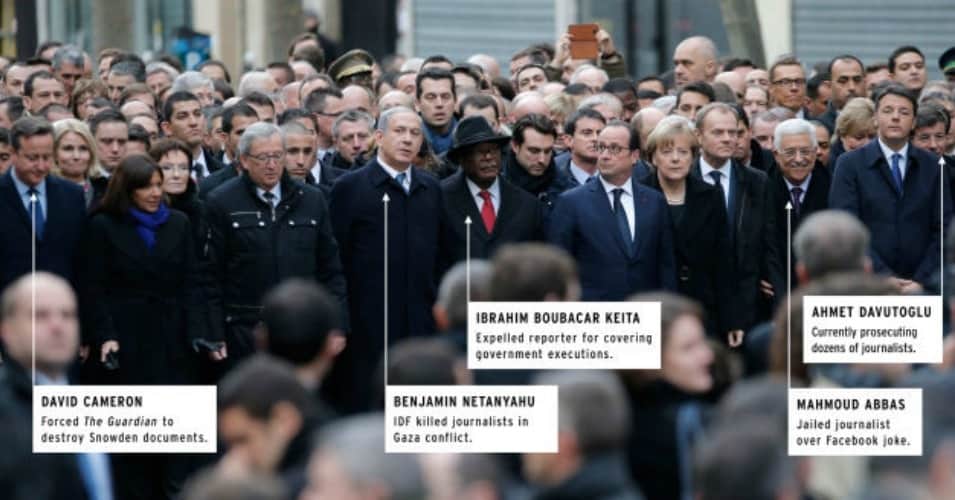 Though world leaders rushed to Paris to show their solidarity with press freedoms in the wake of the Charlie Hebdo attacks, few of them have adequately defended those principles in their own countries. (Image with graphics: via Gawker)

The massacre at Charlie Hebdo, and the subsequent killing of a policewoman and mass murder at the Hyper Cachet kosher market, shocked the world. Young fanatics with automatic weapons unleashed a torrent of violence and death, fueled by zealous intolerance. At the Paris offices of Charlie Hebdo, the satiric newsmagazine, 12 were murdered and 11 wounded. The victims were guilty of nothing more than expressing ideas. Certainly, true to the point of satire, many of the ideas were very offensive to many people—in this case, caricatures of the prophet Muhammad.

In the wake of the violence, people from around the world expressed solidarity with the victims, and with the people of France. Among the world leaders who flocked to Paris to condemn the attacks were some of the worst perpetrators of repression of journalists, all too often Arab and Muslim journalists.

Reporters Without Borders, also known as Reporters Sans Frontieres, or RSF, is based in Paris, not far from the offices of Charlie Hebdo. Word of the attack quickly made it to the staff there. Lucie Morillon, RSF program director, was one of the first people on the scene after the massacre at Charlie Hebdo. I spoke to her in New York City, just a day after she attended last Sunday’s solidarity march in Paris, which drew more than 1 million people. She recounted the events of Wednesday, Jan. 7:

“We were having a meeting … a colleague came in, he said: ‘There’s something huge. It looks like there had been shots fired at Charlie Hebdo, and there might be people dead.’ It was just complete shock, completely surreal.”

They raced to the scene of the massacre. Morillon went on: “There were still bullets on the ground. It was just very chaotic. We were just wondering who’s dead, what happened. And a man left the office, and he just went into President [Francois] Hollande’s arms. He burst into tears, ‘Charb est mort,’ ‘Charb is dead.’” He was speaking of Stephane Charbonnier, Charlie Hebdo’s editor.

On Sunday, the day of marches across France, which drew close to 4 million people, the group stated in a press release, “Reporters Without Borders welcomes the participation of many foreign leaders in today’s march in Paris in homage to the victims of last week’s terror attacks and in defence of the French republic’s values, but is outraged by the presence of officials from countries that restrict freedom of information.” The group stated it was “appalled by the presence of leaders from countries where journalists and bloggers are systematically persecuted such as Egypt, Russia, Turkey and United Arab Emirates.”

Photos and video of the world leaders standing, locked arm in arm, leading the massive march, raced around the planet. Much ado was made in the United States of the absence of any high-level Obama administration official. Even though Attorney General Eric Holder was in Paris that day, inexplicably, he didn’t show up for the march. Egypt’s Foreign Minister Sameh Shoukry was there, whose government has imprisoned many journalists, most notably three from Al-Jazeera who have been held for more than a year now: Peter Greste, Mohamed Fahmy and Baher Mohamed.

The Saudi Arabian ambassador to France also showed up at the march. Two days earlier, his government flogged the blogger Raif Badawi. He was sentenced to 1,000 lashes, but the Saudi monarchy is administering 50 lashes per week. Delphine Hagland, the U.S. director of Reporters Without Borders, explained, “They decided to divide the 1,000 lashes in different sessions because they were afraid that he would be killed.”

It has now been reported that the world leaders, locked arm in arm, were not in the march at all, but were gathered for a photo opportunity on a closed street, away from the protest, under guard. Quite simply, it was the people who led that day, not the leaders. “Je Suis Charlie,” or “I am Charlie,” was the battle cry of many. Others tweeted or held signs that read, “I am not Charlie,” condemning the violence without endorsing Charlie Hebdo’s caricatures. A Muslim woman held a sign, “Je Suis Juif,” “I am Jewish,” in solidarity with the Jewish victims. Others held signs that read “Je Suis Ahmed” for Ahmed Merabet, the French Muslim police officer who was killed outside the magazine offices.

Close to 4 million people took to the streets of France last Sunday, demanding a more peaceful society, one in which press freedom and religious tolerance overwhelm violence and hatred.