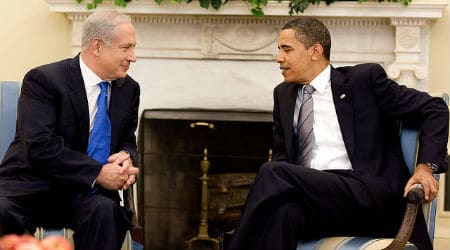 By Janine Jackson
Fairness and Accuracy in Reporting (FAIR)

Janine Jackson interviewed Yousef Munayyer about narratives in coverage of Israel/Palestine violence for the October 29 CounterSpin. This is a lightly edited transcript.

Janine Jackson: You hear a lot in the US media about a “clash of narratives” in the fighting between Palestinians and Israelis. But the truth is US news is shaped much more by one perspective than the other.

Israeli deaths are foregrounded, with those of Palestinians often appearing as a dependent clause, even though they are far greater. Claims by Israeli authorities are presented matter-of-factly, even when they are disputed. And the overall image is of a battle between symmetrical forces, even when one is armed with knives and rocks and the other with one of the most powerful militaries in the world. It’s a presentation that is more skewed in some ways than that presented in Israeli media and it poorly serves those hoping to make sense of the situation or to envision possible ways forward.

So what should we keep in mind as we read about what’s called the “latest round” of violence in Israel/Palestine, including fights over holy sites in Jerusalem? Joining us now to discuss the issues is Yousef Munayyer. He’s executive director of the coalition US Campaign to End the Israeli Occupation. Yousef Munayyer, welcome back to CounterSpin.

Yousef Munayyer: Great to be back.

JJ: US media tend to treat the conflict between Israel and Palestine as just: Which side are you on? You know, Israelis say and believe this; Palestinians say and believe that. But it ought to be a reportable story, and it is possible to deplore knife attacks by Palestinians, for example, and still demand that these be presented in a broader context. What would that broader context on the most recent events include?

YM: I think one of the biggest challenges, really, is the schedule, if you will, on which this issue is covered. The moments when that happens is almost always when Israelis are exposed to greater degrees of violence. The problem with this, of course, is that it creates a frame of understanding, in the mind of the American news consumer, that these events happen in something of a vacuum.

What’s missing is what happens in between and always, and that is the status quo of military occupation, which is itself a system of violence, a system that holds Palestinians, that holds human beings, in a condition that is contrary to the natural human condition of freedom, and uses force, uses violence, to keep them in that position. So this systematic violence, which Palestinians are essentially acting out against in these outbursts, which eventually get covered, does not get covered the way that it should. And so what we end up getting is a very skewed representation in our media of what the real dynamics of violence are.

JJ: Someone noted that a recent USA Today story mentioned the occupation in its lead, in its first paragraph, which is something which is actually quite rare. Often the story zooms in on whatever the most recent clash was, and the occupation, if it gets in there, is kind of at the end, as part of a list of other things going on, when in fact that is crucial context in any story, one would think, of violence.

YM: Absolutely. Just because violence against Israelis stops for any period of time, the occupation doesn’t stop. It remains consistent, the violence of the occupation remains consistent, and this is the context in which all of this is occurring. And unfortunately, in the coverage that we often see, this incident-based coverage, even the reporting of those incidents is highly skewed and very much a representation of official Israeli narratives.

So they get to set the terms of what actually took place, unless, of course, the Western reporters take the initiative to actually go and investigate on the scene of these events, talk to witnesses that were there, talk to Palestinians who experience what’s going on and report as well that perspective on the events that took place. And more often than not, we only see a regurgitation of the official Israeli narrative in the vast majority of these events.

JJ: I’m looking at an AP story from today, from October 29; the headline is “Two Palestinians Killed in West Bank in Stabbing Incidents.” As you read the piece, you learn that police said one of the Palestinians killed had stabbed a soldier, wounding him lightly, and that the military said the other person had attempted to stab a soldier, but a Palestinian witness disputes that. Now there you see at work, not just the reliance on the Israeli police and the military for the information, but there also doesn’t seem to be any questioning of the idea that the penalty for stabbing, or maybe attempting to stab someone, is summary execution. Have reporters just become so inured to that, that they leave it unchallenged?

YM: It certainly seems that way. Of course, that’s what we’ve seen in terms of the response from the Israeli security apparatus, whether it’s the police or the military, in response to some of these incidents. And in many cases what happens is a Palestinian is shot and killed even at a time when they are not presenting any threat, when non-lethal force could be used to arrest them, and we’ve seen some of these incidents caught on video as well. We’ve also seen incidents where Palestinians who have already been subdued are then fired into additional times, essentially executed.

This is, of course, very troubling, not only because it is an illegal extrajudicial assassination, but also because it speaks to the message that the Israeli government is trying to send to Palestinians, and it speaks to how they believe this problem is going to be solved. That only through the use of brute force, that only through the expression that any resistance will be met with the strongest possible repression, will Palestinians get the message that this has to stop. Unfortunately what we’ve seen is that the entrenchment of the occupation, the continuance of these policies, is only likely to continue to stoke the ire of Palestinians living under these oppressive systems.

JJ: Let me continue on that idea of what sends a message. A few weeks back, lots of folks thought that it was bizarre that Israeli Prime Minister Benjamin Netanyahu would claim that a Palestinian gave Hitler the idea of the Holocaust. But in a recent piece for The Nation, you say that outlandish claims like that actually also have a kind of message-delivery purpose. Tell us a little about that.

YM: Sure. What the Israeli prime minister did, in essentially saying that Hitler didn’t intend to exterminate the Jews until a Palestinian gave him the idea, is problematic on so many levels, especially coming from an Israeli prime minister, and the representative of the state that has often condemned Holocaust revisionism.

It’s part of something bigger as well; it’s part of this attempt that Netanyahu has often made, and many others as well have made, to suggest that the reason that Palestinians behave the way that they do towards Israelis is because of a deep-seated, innate hatred of Jews. Not because of the experience that they’ve had living under the jackboot of military occupation, not because of the experience of dispossession that took place when the state of Israel was created, when hundreds of thousands of refugees were forced from their homes, not because of any of that.

Rather, what they want people to believe is that Palestinians, by virtue of who they are, are opposed to Jews. And the reason that they argue this is because they would like to continue policies of brute force. It’s obviously a very racist analysis, an analysis that is very wrong as well, but it is a politically convenient analysis for those who do not want to end the military occupation, who do not want to come to a just and lasting peace agreement with Palestinians, who, whether they like it or not, are going to be living on that land with Israelis for as long as time will allow. I think it’s a very dangerous narrative that the Israeli prime minister and many others are engaging in as well.

JJ: We’ve been speaking with Yousef Munayyer. He’s executive director of the US Campaign to End the Israeli Occupation, and you can find them online atEndTheOccupation.org. Yousef Munayyer, thank you very much for joining us today on CounterSpin.