The Moral Verdict on Bradley Manning: A Conviction of Love in Action 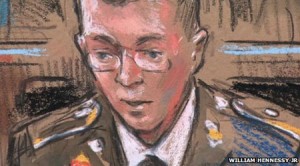 The sun rose with a moral verdict on Bradley Manning well before the military judge could proclaim his guilt. The human verdict would necessarily clash with the proclamation from the judicial bench.
In lockstep with administrators of the nation’s war services, judgment day arrived on Tuesday to exact official retribution. After unforgiveable actions, the defendant’s culpability weighed heavy.

“Our apologies, good friends, for the fracture of good order, the burning of paper instead of children, the angering of the orderlies in the front parlor of the charnel house,” another defendant, Fr. Daniel Berrigan, wrote about another action that resulted in a federal trial, 45 years earlier, scarcely a dozen miles from the Fort Meade courtroom where Bradley Manning faced prosecution for his own fracture of good order.

“We could not, so help us God, do otherwise,” wrote Berrigan, one of the nine people who, one day in May 1968 while the Vietnam War raged on, removed several hundred files from a U.S. draft board in Catonsville, Maryland, and burned them with napalm in the parking lot. “For we are sick at heart…”

On the surface, many differences protrude between those nine draft-files-burning radical Catholics and Bradley Manning. But I wonder. Ten souls saw cruelties of war and could no longer just watch.

“I prefer a painful truth over any blissful fantasy,” Manning wrote in an online chat. Minutes later he added: “I think I’ve been traumatized too much by reality, to care about consequences of shattering the fantasy.” And he also wrote: “I want people to see the truth … regardless of who they are … because without information, you cannot make informed decisions as a public.”

Those words came seven weeks after the world was able to watch the “Collateral Murder” video that Manning had provided to WikiLeaks. And those words came just days before military police arrived to arrest him on May 29, 2010.

Since then, huge numbers of people around the world have come to see Bradley Manning as personification of moral courage. During the last several months I’ve read thousands of moving comments online at ManningNobel.org, posted by signers of the petition urging that he receive the Nobel Peace Prize. The comments are often stunning with heartfelt intensity of wounded idealism, anger and hope.

No verdict handed down by the military judge can change the moral verdict that has emerged from people all over the world, reciprocating what Bradley Manning expressed online a few days before his arrest: “I can’t separate myself from others.” And: “I feel connected to everybody… like they were distant family.”

The problem for the U.S. government was not that Bradley Manning felt that way. The problem came when he acted that way. Caring was one thing. Acting on the caring, with empathy propelling solidarity, was another.

Days ago, in closing argument, the prosecutor at Fort Meade thundered: “He was not a whistleblower, he was a traitor.”

But a “traitor” to what? To the United States… only if the United States is to be a warfare state, where we “cannot make informed decisions as a public.” Only if we obey orders to separate ourselves from the humanity of others. Only if authoritative, numbing myths are to trump empathy and hide painful truth.