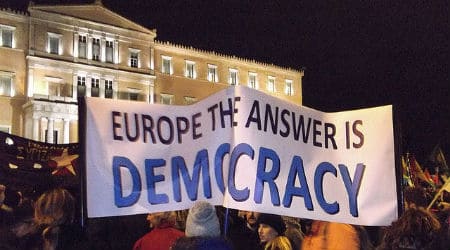 by Zoe Williams
The Guardian

‘This is our political alternative to neoliberalism and to the neoliberal process of European integration: democracy, more democracy and even deeper democracy,” said Alexis Tsipras on 18 January 2014 in a debate organised by the Dutch Socialist party in Amersfoort. Now the moment of deepest democracy looms, as the Greek people go to the polls on Sunday to vote for or against the next round of austerity.

Unfortunately, Sunday’s choice will be between endless austerity and immediate chaos. As comfortable as it is to argue from the sidelines that maybe Grexit in the medium term won’t hurt as much as 30 years’ drag on GDP from swingeing repayments, no sane person wants either. The vision that Syriza swept to power on was that if you spoke truth to the troika plainly and in broad daylight, they would have to acknowledge that austerity was suffocating Greece.

They have acknowledged no such thing. Whatever else one could say about the handling of the crisis, and whatever becomes of the euro, Sunday will be the moment that unstoppable democracy meets immovable supra-democracy. The Eurogroup has already won: the Greek people can vote any way they like – but what they want, they cannot have.

On Saturday the Eurogroup broke with its tradition of unanimity,issuing a petulant statement “supported by all members except the Greek member”. Yanis Varoufakis, the Greek finance minister, sought legal advice on whether the group was allowed to exclude him, andreceived the extraordinary reply: “The Eurogroup is an informal group. Thus it is not bound by treaties or written regulations. While unanimity is conventionally adhered to, the Eurogroup president is not bound to explicit rules.” Or, to put it another way: “We never had any accountability in the first place, sucker.”

More striking still is this line of the statement: “The Eurogroup has been open until the very last moment to further support the Greek people through a continued growth-oriented programme.” The measures enforced by the troika have created an economic contraction akin to that caused by war. With unemployment at 25% and youth unemployment at nearly half, 40% of children now live below the poverty line. The latest offer to Greece promises more of the same. The idea that any of this is oriented towards growth is demonstrably false. The Eurogroup president, Jeroen Dijsselbloem, has started to assert that black is white.

And that brings us to the crux of the troika’s programme: what is the point of reducing this country to rubble? The stated intention at the start of the austerity package was to restore order: allow Greece to take a short hit to its GDP in the interests of building a stronger, more balanced economy in the long run. As it became clear that growth was not restored and that even on its own terms – the creditor must come first – the plan was failing, the line changed. It became a moral crusade, a collective punishment of the Greeks.

In 2012 the head of the IMF, Christine Lagarde, said in an interview with this newspaper, “Do you know what? As far as Athens is concerned, I also think about all those people who are trying to escape tax all the time. All these people in Greece who are trying to escape tax. And I think they should also help themselves collectively.” How? “By all paying their tax.” At the time, it sounded strange: how, in a country of cripplingly high unemployment, with whole families living off the depleted income of one pensioner, was the answer going to come from tax?

She was offering not a solution but a narrative: the Greeks were in this situation because they were bad people. They wanted a beneficent state, but they didn’t want to pool their resources to create one. The IMF was merely the instrument of a discipline they dearly needed. This line has broadly held – the debtors are presented as morally weaker than the creditors. To give them any concessions would be to reward their laziness and selfishness. The fact that debt is a two-way street – that the returns on debt exist because of the risk that the money might be lost, and creditors have their own moral duty to accept losses when they arise – is erased by this telling of the events.

Also airbrushed out of that story is what the late economist Wynne Godley called (in 1992!) the “lacuna in the Maastricht programme”: that while its single-currency proposal made provision for a central bank, it had nothing to say on the matter of what would replace the democratic institutions – the national governments whose power, once they had no control over their own currency, would be limited. Now we have our answer: the strongest takes control. At the moment, Germany knows best. How do we know they know best? Because they are the richest. The euro was founded on the idea that the control of currency was apolitical. It has destroyed that myth, and taken democracy down with it.

These talks did not fail by accident. The Greeks have to be humiliated, because the alternative – of treating them as equal parties or “adults”, as Lagarde wished them to be – would lead to a debate about the Eurogroup: what its foundations are, what accountability would look like, and what its democratic levers are – if indeed it has any. Solidarity with Greece means everyone, in and outside the single currency, forcing this conversation: the country is being sacrificed to maintain a set of delusions that enfeebles us all.