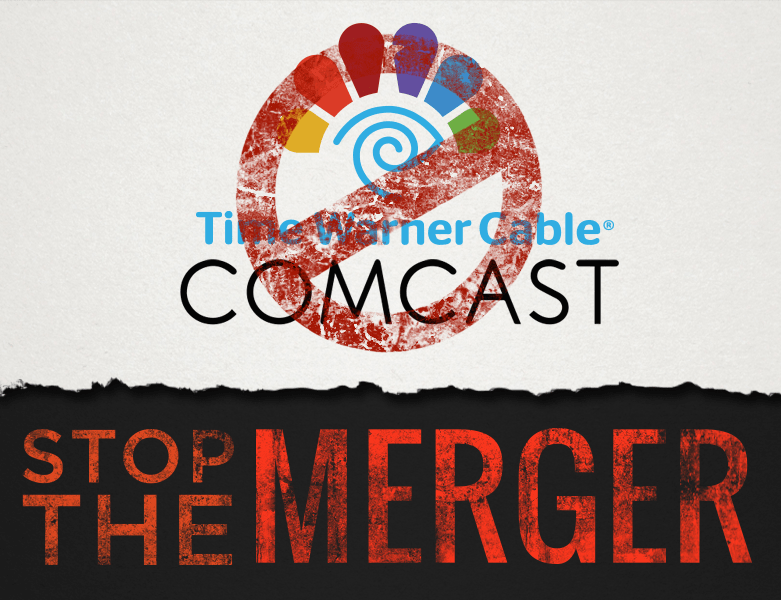 Comcast has announced it intends to merge with Time Warner Cable, joining together the largest and second-largest cable and broadband providers in the country. The merger must be approved by both the Justice Department and the FCC. Given the financial and political power of Comcast, and the Obama administration’s miserable record of protecting the public interest, the time to speak out and organize is now.

“This is just such a far-reaching deal, it should be dead on arrival when it gets to the Department of Justice and the Federal Communications Commission for approval,” Michael Copps told me days after the merger announcement. Copps was a commissioner on the FCC from 2001 to 2011, one of the longest-serving commissioners in the agency’s history. Now he leads the Media and Democracy Reform Initiative at Common Cause. “This is the whole shooting match,” he said. “It’s broadband. It’s broadcast. It’s content. It’s distribution. It’s the medium and the message. It’s telecom, and it’s media, too.” Back in 2011, when Comcast sought regulatory approval of its proposed acquisition of NBC Universal, Copps was the sole “no” vote out of the five FCC commissioners.

Copps is not the only former FCC commissioner with an opinion on the merger. Meredith Attwell Baker served briefly there, from 2009 to 2011. President Barack Obama appointed Baker, a Republican, to maintain the traditional party balance on the FCC. Baker was a big supporter of the Comcast-NBCU merger. It surprised many, however, when she abruptly resigned her FCC commission seat to go work for – you guessed it – Comcast. She was named senior vice president for governmental affairs for NBCU, just four months after voting to approve the merger.

As for the regulators, the news website Republic Report revealed that the head of the Justice Department’s Antitrust Division, William Baer, was a lawyer representing NBC during the merger with Comcast, and Maureen Ohlhausen, a commissioner on the Federal Trade Commission, provided legal counsel for Comcast before joining the commission. If you wonder how President Obama feels about the issue, look at who he appointed to be the new chairperson of the FCC: Tom Wheeler, who was for years a top lobbyist for both the cable and wireless industries.

A leading organization on media policy in the U.S., Free Press, issued a statement following the announcement of the proposed merger. Craig Aaron, the group’s president, said:

No one woke up this morning wishing their cable company was bigger or had more control over what they could watch or download. But that – along with higher bills – is the reality they’ll face tomorrow unless the Department of Justice and the FCC do their jobs and block this merger.

Free Press hopes millions will reach out to the FCC and the Justice Department to voice disapproval of the Comcast/Time Warner merger.

In Congress, one of the most vocal opponents is someone who actually knows a bit about the TV industry, Minnesota Sen. Al Franken. Franken rose to national prominence as a comedian and writer on the early years of NBC’s Saturday Night Live. He clearly doesn’t find the prospect of a larger Comcast very funny. “Cable rates have risen significantly over the last two decades, and my constituents express frustration at being squeezed by unacceptably high cable bills every month. Many consumers would switch cable providers if only they had a viable option to do so,” he wrote in a letter to the FCC, Justice Department and the Federal Trade Commission.

Coincident with the attempted merger is a renewed fight over net neutrality, the basic rules governing how the Internet operates, especially whether Internet service providers like Comcast, Time Warner, AT&T and Verizon should be able to favor some websites over others. Should there be rules that allow people equal access to the website of a small human-rights organization in Russia or a group of Occupy activists in New York, as, say, the websites of Wal-Mart or the National Rifle Association? A growing fear among Internet activists is that the US regulatory system, beholden to lobbyists and corporate donors, will forfeit net neutrality, creating what Michael Copps calls “the cable-ization of the Internet.”

The public has confronted monstrous mergers before, and blocked them. So, too, have they faced corporate attempts to stifle the fundamental freedom of the Internet. Freedom of speech, freedom to connect and communicate, is the lifeblood of a democracy. The fight to preserve and expand the diversity and vibrancy of our media system is one that cannot be left to bought-out regulators and corporate lobbyists.