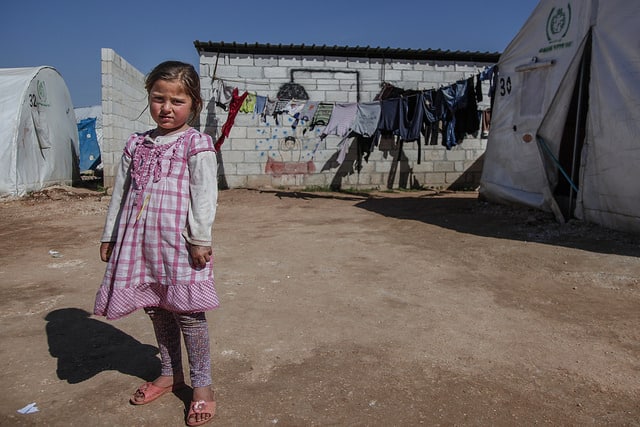 The flood of people fleeing war and misery is swelling daily, reaching the shores and borders of Europe in a desperate bid for safety. They come from Syria, where a brutal civil war during the past half-decade has killed well over 200,000, and caused the displacement of 12 million people, both inside and outside the country’s borders—half of Syria’s population.

Other migrants come from sub-Saharan Africa, fleeing poverty and conflict. Like many Syrians, these people make their way to Libya, a country now in a state of near anarchy, to venture across the Mediterranean Sea in dangerous, overcrowded boats. Thousands have drowned. Ironically, many of these migrants are running toward the very countries that sold the weapons that are fueling the warfare they are fleeing.

Jean-Claude Juncker, president of the European Commission, speaking of the migrant crisis, said this week at the State of the European Union speech in Strasbourg, France: “I’m not talking about 40,000. I’m not talking about 120,000. It’s 160,000. That’s the number Europeans have to take in charge and have to take in their arms.” Junker, of course, meant by “arms” a protective embrace. But another European with firsthand knowledge of the plight of the refugees takes the word in its other sense:

“It is our arms which are also killing and destroying these countries,” Annette Groth told us on the “Democracy Now!” news hour. She is a member of the German Parliament and spokeswoman for human rights for Germany’s Left Party. She just returned from a trip to Hungary, where she witnessed thousands of migrants stranded at the Budapest train station. “Germany is the third-biggest weapons exporter, and we have very good relations with, for instance, Saudi Arabia and Qatar, despite massive protest,” she said. “Our government is still delivering arms to Saudi Arabia, [which] is also supporting ISIS, the jihadists”

The Stockholm International Peace Research Institute (SIPRI) analyzes and reports on global arms trades. A recent SIPRI summary noted: “The volume of international transfers of major weapons in 2010-14 was 16 percent higher than in 2005-2009. The five biggest exporters in 2010-14 were the United States, Russia, China, Germany and France.” The top five recipients of these major arms shipments included Saudi Arabia and the United Arab Emirates, two U.S. allies that are, according to widespread reports, offering significant support to ISIS, which is a central antagonist in the civil war in Syria, as well as in Iraq. Add to that the latest news, that Russia is stepping up military aid to the regime of Syria’s president, Bashar al-Assad, and that the United Kingdom has directly engaged in airstrikes in Syria, and France is preparing to do the same.

While many European nations are accepting refugees (the Finnish prime minister has even opened his guesthouse), far outpacing any welcome offered by the Obama administration, none of this will solve the problem. The conflicts in the Middle East must be resolved. But can that happen while the U.S. (and Russia, and Germany, and France) continue their massive arms sales to belligerents in the region? Saudi Arabia’s King Salman visited the White House last week, and has secured a massive new infusion of missiles and so-called smart bombs, in addition to the regular arsenal that the U.S. supplies to the oil-rich ally.

“There are more arms in the Middle East region than bread,” Annette Groth of the German Parliament reflected. “I remember a discussion with an ambassador from this region about three years ago, and he looked at us, other parliamentarians, as well, and he said, ‘It is time that the West collects the weapons you have brought us.’ Very, very true, and very simple.”

Amy Goodman is the host of “Democracy Now!,” a daily international TV/radio news hour airing on more than 1,300 stations. She is the co-author, with Denis Moynihan, of “The Silenced Majority,” a New York Times best-seller.