The US Supreme Court is about to rule in a case that, if successful, would sound the death knell for average Americans’ rapidly-dwindling influence over our politics. McCutcheon vs. FEC seeks to remove many of  the few leftover limits protecting  our democracy sinceCitizens United.

That’s right, McCutcheon is a play by the very wealthy to increase   their influence, because they don’t think Citizens United tipped the scales in their favor enough.

For an indication of just how regressive the thinking behind McCutcheon is, look no further than its namesake, plaintiff Shaun McCutcheon. A coal baron aligned with the Koch brothers and other wealthy climate deniers, McCutcheon has already been found by the Center for Public Integrity to have donated more than the legal limit to the Republican Party in 2012.

As the country continues to be battered by the local and global impacts upon us  through the actions of big coal, and as natural gas and renewable energy continue to cut into his bottom line, McCutcheon, like most coal executives, is getting increasingly desperate to control Congress and state legislatures. Already, those executives wield enough influence to prevent Congress from adopting significant climate-related policies. And they have successfully stymied attempts to close the loopholes in environmental regulations. McCutcheon will increase their unfair advantage over advocates of the cheaper and cleaner sources of electricity we need.

What McCutcheon will do

McCutcheon is the next  step in a long-term attack by corporations and wealthy individuals to buy our Democracy outright. In fact, many people are calling it “Citizens United 2,” referencing the notorious decision that gave corporations the ability to  increase “outside spending” in order to influence the outcome of elections.

The Citizens United decision effectively gave birth to large, usually anonymously-funded Super PACs, which are now permitted to spend as much as they want on TV ads and other forms of advertising. After Citizens United, corporate and wealthy donors organized and funneled tens of millions of dollars to shadowy Super PACs, which sought to influence campaign outcomes through attack ads and dastardly means.

Although the growth of super PACs and their influence has been alarming, their dollars only represented 1/7 of the total spent in the 2012 elections. The rest was the money raised by the candidates and their parties through individual donations.Citizens United preserved the existing cap on donations individuals could make to federal candidates and political parties in a two-year cycle.

If McCutcheon succeeds, those limits will be blown out of the water. Wealthy donors will be allowed to contribute an aggregate amount     of up to $5.9 million to candidates and committees. It will give plutocrats a direct channel of influence, laying the groundwork for a class of super donors.

If only 170 out of the 1399 donors who gave over $100,000 to federal candidates in 2012 had given $3.5 million each, they would have given as much as the total contributed through small donations TO EVERY SINGLE FEDERAL CANDIDATE, not just Romney and President Obama. It is fitting that Shaun McCutcheon is the plaintiff in this case, as it seems the fossil fuel industry stands to gain the most if he wins.

With most Americans catching on to the real threats of climate change, and with a renewable energy future seemingly close at hand, the fossil fuel industry is flailing about, throwing around its cash like it’s the end of the world. The total that coal, oil, and gas executives could contribute collectively would increase from about $11 million to more than $312 million. The Kochs and their wives had their individual contribution levels capped at about $250,000 in 2012. If McCutcheon had been around then, they could have given up to$14 million.

Is there any hope? 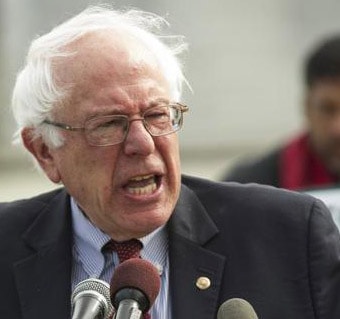 Sen. Bernie Sanders outside the Supreme Court during arguments for McCutcheon v. FEC in October of 2013.

Despite its passage of Citizens United, the Supreme Court has shown signs that it recognizes the utter necessity of limiting individual contributions. In an earlier case that had more than a few similarities to McCutcheon, it stated that, “the prevention of corruption or its appearance constitutes sufficiently important interest to justify political contribution limits.”

But the Roberts court has proven itself capable of rationalizing a pro-corporate agenda even when all logic and common sense (and the Court’s own precedents) argue against it.

Two judges on the court, Antonin Scalia and Clarence Thomas, have failed to recuse themselves from these cases, even though they have also participated in gatherings of wealthy libertarians, organized by the Koch brothers  — gatherings that also include dozens of super-donors who regularly “max out” their political campaign contributions (and who stand to gain a lot from McCutcheon.) If that weren’t sign enough that McCutcheon isn’t some rogue, stand-alone activist, consider who joined his side in the case: the Republican National Committee.

The vast majority of Americans from all parties are well aware that money has far too much influence in Washington. After McCutcheon the challenge will be to overcome the widespread sense of futility and despair, and begin the good, hard work of organizing of taking back our democracy.

Jason Schwartz is the editor of the EnvironmentaList, the Greenpeace blog. He lives in New York City.