The Many Ways to Help Standing Rock 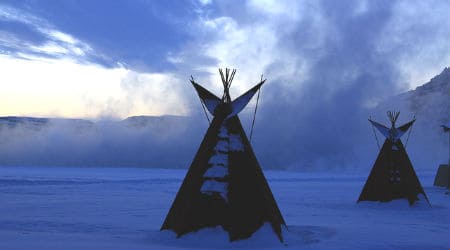 The timing couldn’t have been more awful.

The day after Thanksgiving, the U.S. Army Corps of Engineers told the Standing Rock Sioux tribe that people camped at the Oceti Sakowin Camp would be considered trespassers on that federally managed land after Dec. 5. With thousands of people, it is the largest of the water protectors’ camps. Next came the snow, which is piling up across the camp as I write. North Dakota Gov. Jack Dalrymple ordered an immediate evacuation allegedly out of concern for the well-being of water protectors in the “harsh winter weather.”

“He gave a whole list of concerns … that we’re going to freeze to death and the solution is to cut off emergency services,” said Tara Houska, an organizer from Honor The Earth, at a news conference on Monday. The move evokes the “collective memory of Native people being pushed off land,” she added. “In 2016, that history is still happening.”

“The most dangerous thing we can do is force well-situated campers from their shelters and into the cold,” Standing Rock Tribal Chairman Dave Archambault II said in a statement. “If the true concern is for public safety than [sic] the Governor should clear the blockade, and the county law enforcement should cease all use of flash grenades, high-pressure water cannons in freezing temperatures, dog kennels for temporary human jails, and any harmful weaponry against human beings.”

An elder at the camp, Faith Spotted Eagle said, “It is so transparent that what they are doing is to protect the pipeline.”

What will you do? With these rapidly unfolding events at Standing Rock, what can you do? How can you support this indigenous-led nonviolent movement?

“We call on all people of conscience, from all Nations, to join the encampments and stand with us by Dec. 5 as we put our bodies in front of the machines,” says a statement from the Sacred Stone Camp, which also states: “We call on allies across the world to take action EVERY DAY starting December 1.”


How can we do something every day, as requested, to make a difference where we are?

Here are some things to consider as you decide what to do.

If you’re a veteran, consider joining the 2,000-plus veterans who are “self-deploying” to Standing Rock on December 4–7 to stand nonviolently with the water protectors.

People with skills like nurses and other medics are needed. Check with Oceti Sakowin campor teams already on the ground to find out. And there is always work to do in the kitchen or chopping wood. People are also needed at the front lines to maintain a nonviolent presence; they risk arrest and attack from law enforcement’s “sub-lethal” weapons.

If you do go to Standing Rock, remember that this is a movement founded in nonviolence and prayer. Respect the indigenous leaders there and follow their requests about how to behave at camp in keeping with Lakota traditions.

But before you pack up your car and head out, consider the snow. You will need to be well-provisioned to avoid becoming a burden on the community there. Many of the organizers have asked White allies to consider whether the money spent to get yourself to Standing Rock would be better spent donating to the cause: covering mounting legal costs, provisioning an indigenous water protector, or helping the Standing Rock tribe pay for costs.

You may be a more effective advocate where you are, where you have easy access to elected officials and banks; at Standing Rock, access to phone and internet service is limited.

Break up with your bank

Banks are feeling the heat from the protests and from their own customers. One bank, DNB of Norway, has responded to pressure by divesting from Energy Transfer, the parent company of the Dakota Access pipeline. DNB is reportedly reconsidering more than $400 million in credit. The ING Bank of the Netherlands, which prides itself on its sustainability and human rights stance, posted a statement on its website expressing concern about excessive police force at Standing Rock.

If your bank is one of the direct investors in DAPL or one of the investors in its parent companies, Energy Transfer and Sunoco Logistics, ask them to withdraw support. Tell them you plan to close your account if their support continues. Photograph yourself cutting up your credit card, or share your letter on your social media networks. I posted my break-up letter to Chase Bank on my blog and on Facebook and Twitter—and was surprised by how many responded that they planned to do the same.

If you have a retirement fund or mutual fund, find out if it is invested in Energy Transfer Partners, Energy Transfer Equity, or Sunoco Logistics—or any of the 38 banks offering credit to the pipeline project. If so, let those investment companies know you object and tell them you would like the fund to divest or you’ll shift your account to a socially responsible investment fund.

Consider planning or participating in a nonviolent protest at a bank branch or headquarters. Sacred Stone Camp has posted a map to find bank branches near you and recommends actions beginning Dec. 1.

Banks are risk-averse, and this pipeline project has become quite risky because of public relations problems as well as the oil price bust and reduction of oil extraction in North Dakota. Banks and investors may be hoping for an excuse to back out. Your action could help tip the balance.

Call off the police

There are now dozens of law enforcement agencies participating in the multistate force that is shooting water cannons, pepper spraying, and shooting various “sub-lethal” weapons at unarmed water protectors.

If your police force is there, call them home. Although the police staffing is changing constantly, some sheriffs have responded to public pressure by refusing to send deputies. Contact elected officials, write to local papers and local blogs, and contact local media to object to law enforcement involvement at Standing Rock.

Angry about the evacuation order? Talk to the person who made it:

“Where is President Obamaand why does he remain silent on this issue?” Kandi Mossett of the Indigenous Environmental Network asked in a statement responding to the governor’s evacuation order.

When he visited Standing Rock on June 13, 2014, President Obama said this: “I promised when I ran to be a president … who honors our sacred trust, and who respects your sovereignty, and upholds treaty obligations, and who works with you in a spirit of true partnership, in mutual respect, to give our children the future that they deserve.”

Remind President Obama of this and of the way his decision on DAPL will shape his legacy.

Contact the U.S. Army Corps of Engineers, which is charged with making a decision about the permit to drill under the Missouri River. Tell them to reject the permit and order a full environmental impact statement.

The Department of Justiceshould be concerned about the use of excessive force against the water protectors and alleged violations of civil and human rights.

You can also call the Department of Justice Office of Community Relations, which offers mediation to communities facing racial and religious confrontations.

Remember to speak politely and factually about your concerns. If you send an email, copy it to your social media account to inspire your friends, and to local media.

Call out the media

If media outlets are ignoring or distorting the news, call them on it. Send open letters and share them on social media. Ask major media to fully and factually cover the unfolding drama at Standing Rock.

There are many opportunities to donate cash or supplies. Here are three that I can vouch for:

• The Standing Rock tribe, which is using the funds for their substantial legal expenses and for providing facilities for the camp: standwithstandingrock.net/donate/.

• Oceti Sakowin Camp is the largest of the water protector camps, the closest to the front lines, and is now facing evacuation: ocetisakowincamp.org/donate.

• The Water Protector Legal Collective (formerly the Red Owl Collective), which has been providing legal support to the many who have been arrested at Standing Rock: https://fundrazr.com/campaigns/11B5z8

You can also support some of the key indigenous organizations that are leading this movement nationwide and worldwide:

You can raise more money for these and others by organizing support events and fundraisers in your community. Invite people who are curious about the issues as well as people who are already passionately engaged. Make it a celebratory or prayerful event in whatever way makes sense to your community.

Resist extraction where you live. Join work to stop the pipelines, coal trains, fracking, and export terminals in your city or state and include #NoDAPL and #WaterisLife messages to remind people of the link to Standing Rock.

Resist but also renew. Remember that as you resist the dystopian world of extraction, Donald Trump, violence, and racism, you can also use your activism to build up the world you want. Do your own “just transition,” switching to clean energy, conserving, protecting the water, rebuilding the soil—while including everyone in a way of life that is more soul-satisfying and joy-filled.

Resilience for the days ahead

When I talk to people at Standing Rock, I feel the trauma and pain but also the resolve. The young people speak of being the Seventh Generation, the ones that were prayed for. And many speak of the suffering they are prepared to endure to ensure the next generations has the clean water they will need to survive. That resolve is helped by the support that continues to flow in from more than 300 tribes nationwide, and from hundreds of thousands of allies, including next week’s arrival of thousands of veterans.

“We are not standing down,” said LaDonna Brave Bull Allard, founder of Sacred Stone Camp, at a news conference on Monday in response to the governor’s evacuation order. “We are in our home, we are strong, and we have prayer.”

Sarah van Gelder is co-founder and editor-at-large of YES! Magazine, and author of The Revolution Where You Live: Stories from a 12,000 Mile Journey Through a New America. Follow her blog and connect with Sarah on Twitter: @sarahvangelder