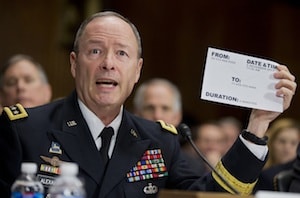 This is our last gasp as a democracy. The state’s wholesale intrusion into our lives and obliteration of privacy are now facts. And the challenge to us—one of the final ones, I suspect—is to rise up in outrage and halt this seizure of our rights to liberty and free expression. If we do not do so we will see ourselves become a nation of captives.

The public debates about the government’s measures to prevent terrorism, the character assassination of Edward Snowden and his supporters, the assurances by the powerful that no one is abusing the massive collection and storage of our electronic communications miss the point. Any state that has the capacity to monitor all its citizenry, any state that has the ability to snuff out factual public debate through control of information, any state that has the tools to instantly shut down all dissent is totalitarian. Our corporate state may not use this power today. But it will use it if it feels threatened by a population made restive by its corruption, ineptitude and mounting repression. The moment a popular movement arises—and one will arise—that truly confronts our corporate masters, our venal system of total surveillance will be thrust into overdrive.

The most radical evil, as Hannah Arendt pointed out, is the political system that effectively crushes its marginalized and harassed opponents and, through fear and the obliteration of privacy, incapacitates everyone else. Our system of mass surveillance is the machine by which this radical evil will be activated. If we do not immediately dismantle the security and surveillance apparatus, there will be no investigative journalism or judicial oversight to address abuse of power. There will be no organized dissent. There will be no independent thought. Criticisms, however tepid, will be treated as acts of subversion. And the security apparatus will blanket the body politic like black mold until even the banal and ridiculous become concerns of national security.

I saw evil of this kind as a reporter in the Stasi state of East Germany. I was followed by men, invariably with crew cuts and wearing leather jackets, whom I presumed to be agents of the Stasi—the Ministry for State Security, which the ruling Communist Party described as the “shield and sword” of the nation. People I interviewed were visited by Stasi agents soon after I left their homes. My phone was bugged. Some of those I worked with were pressured to become informants. Fear hung like icicles over every conversation.

The Stasi did not set up massive death camps and gulags. It did not have to. The Stasi, with a network of as many as 2 million informants in a country of 17 million, was everywhere. There were 102,000 secret police officers employed full time to monitor the population—one for every 166 East Germans. The Nazis broke bones; the Stasi broke souls. The East German government pioneered thepsychological deconstruction that torturers and interrogators in America’s black sites, and within our prison system, have honed to a gruesome perfection.

The goal of wholesale surveillance, as Arendt wrote in “The Origins of Totalitarianism,” is not, in the end, to discover crimes, “but to be on hand when the government decides to arrest a certain category of the population.” And because Americans’ emails, phone conversations, Web searches and geographical movements are recorded and stored in perpetuity in government databases, there will be more than enough “evidence” to seize us should the state deem it necessary. This information waits like a deadly virus inside government vaults to be turned against us. It does not matter how trivial or innocent that information is. In totalitarian states, justice, like truth, is irrelevant.

The object of efficient totalitarian states, as George Orwell understood, is to create a climate in which people do not think of rebelling, a climate in which government killing and torture are used against only a handful of unmanageable renegades. The totalitarian state achieves this control, Arendt wrote, by systematically crushing human spontaneity, and by extension human freedom. It ceaselessly peddles fear to keep a population traumatized and immobilized. It turns the courts, along with legislative bodies, into mechanisms to legalize the crimes of state.

The corporate state, in our case, has used the law to quietly abolish the Fourth and Fifth amendments of the Constitution, which were established to protect us from unwarranted intrusion by the government into our private lives. The loss of judicial and political representation and protection, part of the corporate coup d’état, means that we have no voice and no legal protection from the abuses of power. The recent ruling supporting the National Security Agency’s spying, handed down by U.S. District Judge William H. Pauley III, is part of a very long and shameful list of judicial decisions that have repeatedly sacrificed our most cherished constitutional rights on the altar of national security since the attacks of 9/11. The courts and legislative bodies of the corporate state now routinely invert our most basic rights to justify corporate pillage and repression. They declare that massive and secret campaign donations—a form of legalized bribery—are protected speech under the First Amendment. They define corporate lobbying—under which corporations lavish funds on elected officials and write our legislation—as the people’s right to petition the government. And we can, according to new laws and legislation, be tortured or assassinated or locked up indefinitely by the military, be denied due process and be spied upon without warrants. Obsequious courtiers posing as journalists dutifully sanctify state power and amplify its falsehoods—MSNBC does this as slavishly as Fox News—while also filling our heads with the inanity of celebrity gossip and trivia. Our culture wars, which allow politicians and pundits to hyperventilate over nonsubstantive issues, mask a political system that has ceased to function. History, art, philosophy, intellectual inquiry, our past social and individual struggles for justice, the very world of ideas and culture, along with an understanding of what it means to live and participate in a functioning democracy, are thrust into black holes of forgetfulness.

The political philosopher Sheldon Wolin, in his essential book “Democracy Incorporated,” calls our system of corporate governance “inverted totalitarianism,” which represents “the political coming of age of corporate power and the political demobilization of the citizenry.” It differs from classical forms of totalitarianism, which revolve around a demagogue or charismatic leader; it finds its expression in the anonymity of the corporate state. The corporate forces behind inverted totalitarianism do not, as classical totalitarian movements do, replace decaying structures with new structures. They instead purport to honor electoral politics, freedom of expression and the press, the right to privacy and the guarantees of law. But they so corrupt and manipulate electoral politics, the courts, the press and the essential levers of power as to make genuine democratic participation by the masses impossible. The U.S. Constitution has not been rewritten, but steadily emasculated through radical judicial and legislative interpretation. We have been left with a fictitious shell of democracy and a totalitarian core. And the anchor of this corporate totalitarianism is the unchecked power of our systems of internal security.

Our corporate totalitarian rulers deceive themselves as often as they deceive the public. Politics, for them, is little more than public relations. Lies are told not to achieve any discernable goal of public policy, but to protect the image of the state and its rulers. These lies have become a grotesque form of patriotism. The state’s ability through comprehensive surveillance to prevent outside inquiry into the exercise of power engenders a terrifying intellectual and moral sclerosis within the ruling elite. Absurd notions such as implanting “democracy” in Baghdad by force in order to spread it across the region or the idea that we can terrorize radical Islam across the Middle East into submission are no longer checked by reality, experience or factually based debate. Data and facts that do not fit into the whimsical theories of our political elites, generals and intelligence chiefs are ignored and hidden from public view. The ability of the citizenry to take self-corrective measures is effectively stymied. And in the end, as in all totalitarian systems, the citizens become the victims of government folly, monstrous lies, rampant corruption and state terror.

The Romanian poet Paul Celan captured the slow ingestion of an ideological poison—in his case fascism—in his poem “Death Fugue”:

We, like those in all emergent totalitarian states, have been mentally damaged by a carefully orchestrated historical amnesia, a state-induced stupidity. We increasingly do not remember what it means to be free. And because we do not remember, we do not react with appropriate ferocity when it is revealed that our freedom has been taken from us. The structures of the corporate state must be torn down. Its security apparatus must be destroyed. And those who defend corporate totalitarianism, including the leaders of the two major political parties, fatuous academics, pundits and a bankrupt press, must be driven from the temples of power. Mass street protests and prolonged civil disobedience are our only hope. A failure to rise up—which is what the corporate state is counting upon—will see us enslaved.