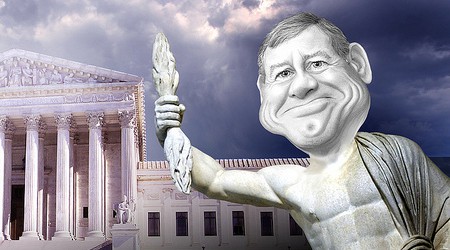 By Jeffrey Toobin
The New Yorker

If you think that the Supreme Court’s decision in McCutcheon v. Federal Election Commission was bad, just wait: worse may be on the way.

The issue before the Court was fairly narrow, even a little obscure. Congress bars individuals from contributing more than fifty-two hundred dollars to any candidate for federal office in any election cycle. It also bars individuals from contributing more than a hundred and twenty-three thousand dollars, in total, to multiple federal candidates in a cycle. In the McCutcheon case, by a vote of five to four, the Court struck down the overall hundred-and-twenty-three-thousand-dollar limit. But this ruling will affect relatively few campaign contributors. In the most recent cycle, fewer than six hundred donors maxed out to candidates.

So why is the case important? Because the language of Chief Justice John Roberts’s opinion suggests that the Court remains committed to the project announced most prominently in the Citizens United case, four years ago: the deregulation of American political campaigns.

The court, and Roberts in particular, has been very clear that regulation of campaign contributions is allowed under a single rationale. As he wrote in McCutcheon, “It is not an acceptable governmental objective to ‘level the playing field,’ or to ‘level electoral opportunities,’ or to ‘equalize the financial resources of candidates.’” Rather, Roberts wrote, “Congress may target only a specific type of corruption—‘quid pro quo’ corruption.”

Spending large sums of money in connection with elections, but not in connection with an effort to control the exercise of an officeholder’s official duties, does not give rise to such quid pro quo corruption. Nor does the possibility that an individual who spends large sums may garner “influence over or access to” elected officials or political parties. And because the Government’s interest in preventing the appearance of corruption is equally confined to the appearance of quid pro quo corruption, the Government may not seek to limit the appearance of mere influence or access.

In other words, Roberts is defining “quid pro quo” corruption almost as outright bribery, which Congress can outlaw. But the implication of what Roberts is saying is that anything short of outright bribery is protected by the First Amendment.

This means that the Court may be preparing to do away with the fifty-two-hundred-dollar limit, as well. Unlike the restriction on overall giving, the individual limit is enormously consequential. All campaigns, from House of Representatives races to Presidential contests, seek to have their contributors “max out” by donating the full amount authorized by law. To be sure, Roberts says at several points in the opinion that the issue of the fifty-two-hundred-dollar limit is not before the Court. As he notes, “This case does not involve any challenge to the base limits, which we have previously upheld as serving the permissible objective of combatting corruption.” But, the Court had previously upheld overall limits as well, in the famous 1976 decision Buckley v. Valeo. Roberts brushes that precedent aside as merely “one paragraph of its 139-page opinion.”

Roberts is dismissive of the objections to deregulating campaigns and full of sympathy for the plight of those denied the ability to contribute as much money as they would prefer. He writes that under the current law, “A donor must limit the number of candidates he supports, and may have to choose which of several policy concerns he will advance—clear First Amendment harms.” He adds that “the whole point of the First Amendment is to afford individuals protection against such infringements.” In an almost Orwellian recasting, he calls giving money “participating in an electoral debate.”

Every Chief Justice takes on a project. Earl Warren wanted to desegregate the South. Warren Burger wanted to limit the rights of criminal suspects. William Rehnquist wanted to revive the powers of the states. It increasingly appears likely that, for John Roberts, the project will be removing the limits that burden wealthy campaign contributors—the “whole point” of the First Amendment, as he sees it. So far, that project is doing pretty well.