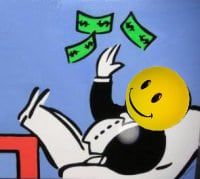 They say there’s honor among thieves, but I say: That depends on the thieves.
Your common street thief, yes — but not those princely CEO’s of corporate larceny. America’s working families have learned the elites in the top suites are rewarded for being pickpockets, swindlers, thugs and scoundrels, routinely committing mass economic violence against the majority of America’s working people to further enrich and empower themselves.
But now comes a cabal of about two-dozen corporate chieftains pushing a vicious new campaign of physical violence against workers. The infamous anti-labor bully, Wal-Mart, is among the leaders, but so are such prestigious chains as Macy’s and Nordstrom, along with Lowe’s, Kohl’s and Safeway. Their goal is to gut our nation’s workers compensation program, freeing corporate giants to injure or even kill employees in the workplace without having to cover all (or, in many cases, any) of the lost wages, medical care or burial expenses of those harmed.
Started more than 100 years ago, workers comp insurance is one of our society’s most fundamental contracts between injured employees who give up the right to sue their companies for negligence when injured on the job and employers who pay for insurance to cover a basic level of medical benefits and wages for those harmed. Administered by state governments, benefits vary, and they usually fall far short of meeting the full needs of the injured people. But the program has at least provided an important measure of help and a bit of fairness to assuage the suffering of millions.
But even that’s too much for the avaricious thieves atop these multibillion-dollar corporations. Why pay for insuring employees when it’s much cheaper just to buy state legislators who are willing to privatize workers’ comp? This lets corporations write their own rules of compensation to slash benefits, cut safety costs — and earn thieving CEO’s bigger bonuses.
But who, you might ask, would help these corporate crooks in their callous and calculating scheme to rob workers of their hard-earned benefits? Why, that would be the work of ARAWC — the Association for Responsible Alternatives to Workers’ Compensation.
When you come across a corporate lobbying group claiming to be pushing “Responsible Alternatives to Such-and-Such,” you can rightly assume that it’s really pushing something totally irresponsible, as well as malicious, shameless, self-serving and even disgusting. Mother Jones magazine reports that ARAWC is a front group funded by these hugely profitable retail chains and corporate behemoths that want to weasel out of compensating employees who suffer injuries at work. By law, corporations in nearly every state must carry workers’ comp insurance, but the ARAWC lobbying combine is pressuring legislators to allow the giants to opt-out of the state benefit plans and instead substitute their own, highly restrictive set of benefits.
What a deal! But it’s a raw deal for injured workers. In Texas, which already has this write-it-yourself loophole, more than half of the corporate plans — get this — pay nothing to the families of workers who’re killed in job accidents! Similarly, under an ARAWC-written opt-out provision that a Tennessee senator sponsored this year, employers wouldn’t have to cover artificial limbs, home care or even funeral expenses of on-the-job accident victims.
Also, the Tennessee bill lets a company simply walk away from maimed workers after just three years or after paying only $300,000 in expenses. Corporations always claim to “value” their employees — and this tells us exactly how little that value is.
By the way, the CEO of ARAWC also happens to be the head of “risk management” at the mingiest of workplaces: Wal-Mart. And that’s what this opt-out scam amounts to — corporate profiteers hoping they can manage to escape paying for risking the lives of America’s workforce. Yes, this shifty move is a scurrilous crime, but it’s a crime that pays richly for those at the top. And the money can fill the hole in their souls where their honor used to be.