The Illusion of Freedom 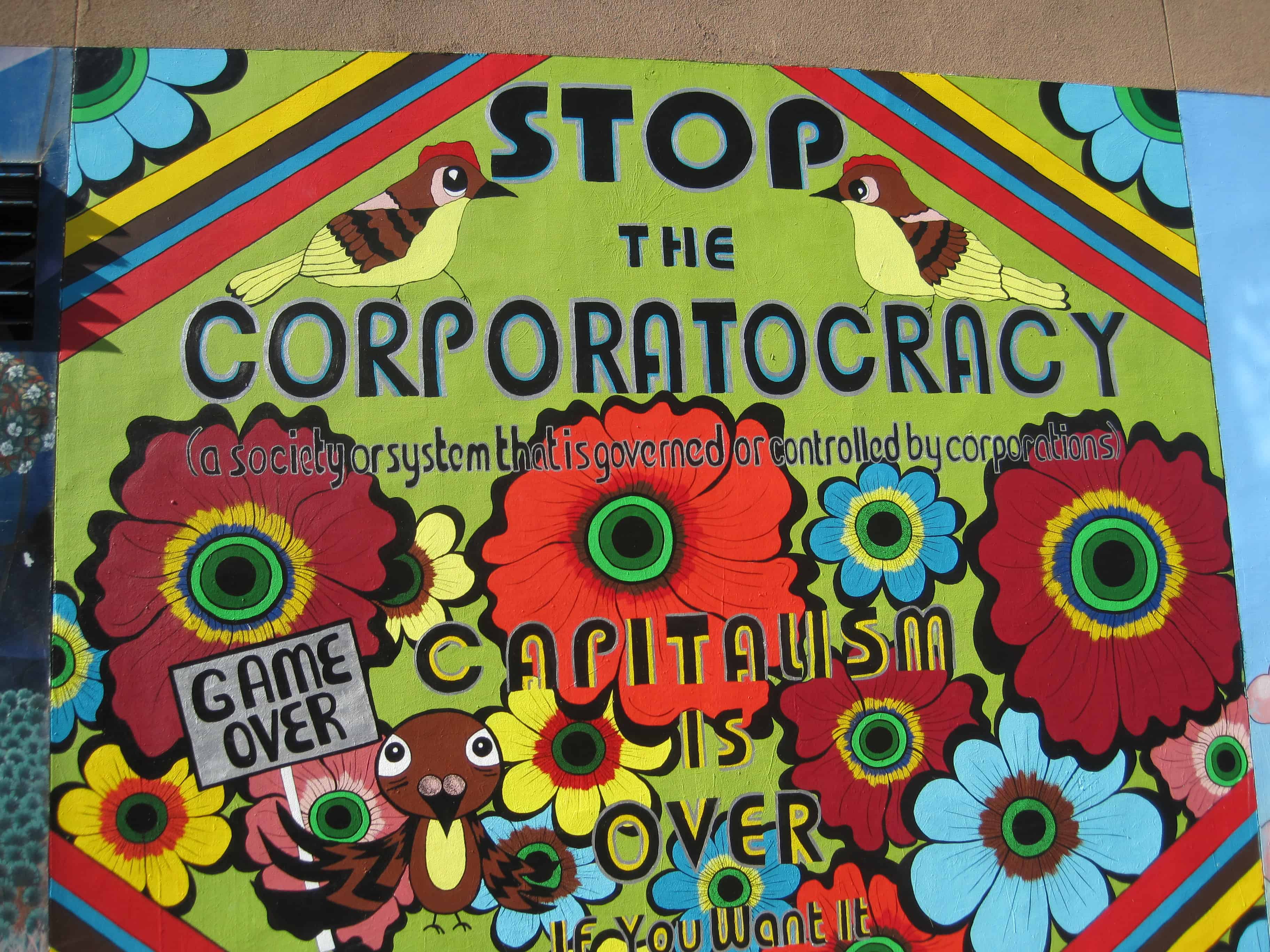 The seizure of political and economic power by corporations is unassailable. Who funds and manages our elections? Who writes our legislation and laws? Who determines our defense policies and vast military expenditures? Who is in charge of the Department of the Interior? The Department of Homeland Security? Our intelligence agencies? The Department of Agriculture? The Food and Drug Administration? The Department of Labor? The Federal Reserve? The mass media? Our systems of entertainment? Our prisons and schools? Who determines our trade and environmental policies? Who imposes austerity on the public while enabling the looting of the U.S. Treasury and the tax boycott by Wall Street? Who criminalizes dissent?

A disenfranchised white working class vents its lust for fascism at Trump campaign rallies. Naive liberals, who think they can mount effective resistance within the embrace of the Democratic Party, rally around the presidential candidacy of Bernie Sanders, who knows that the military-industrial complex is sacrosanct. Both the working class and the liberals will be sold out. Our rights and opinions do not matter. We have surrendered to our own form of wehrwirtschaft. We do not count within the political process.

This truth, emotionally difficult to accept, violates our conception of ourselves as a free, democratic people. It shatters our vision of ourselves as a nation embodying superior virtues and endowed with the responsibility to serve as a beacon of light to the world. It takes from us the “right” to impose our fictitious virtues on others by violence. It forces us into a new political radicalism. This truth reveals, incontrovertibly, that if real change is to be achieved, if our voices are to be heard, corporate systems of power have to be destroyed. This realization engenders an existential and political crisis. The inability to confront this crisis, to accept this truth, leaves us appealing to centers of power that will never respond and ensures we are crippled by self-delusion.

The longer fantasy is substituted for reality, the faster we sleepwalk toward oblivion. There is no guarantee we will wake up. Magical thinking has gripped societies in the past. Those civilizations believed that fate, history, superior virtues or a divine force guaranteed their eternal triumph. As they collapsed, they constructed repressive dystopias. They imposed censorship and forced the unreal to be accepted as real. Those who did not conform were disappeared linguistically and then literally.

The vast disconnect between the official narrative of reality and reality itself creates an Alice-in-Wonderland experience. Propaganda is so pervasive, and truth is so rarely heard, that people do not trust their own senses. We are currently being assaulted by political campaigning that resembles the constant crusading by fascists and communists in past totalitarian societies. This campaigning, devoid of substance and subservient to the mirage of a free society, is anti-politics.

No vote we cast will alter the configurations of the corporate state. The wars will go on. Our national resources will continue to be diverted to militarism. The corporate fleecing of the country will get worse. Poor people of color will still be gunned down by militarized police in our streets. The eradication of our civil liberties will accelerate. The economic misery inflicted on over half the population will expand. Our environment will be ruthlessly exploited by fossil fuel and animal agriculture corporations and we will careen toward ecological collapse. We are “free” only as long as we play our assigned parts. Once we call out power for what it is, once we assert our rights and resist, the chimera of freedom will vanish. The iron fist of the most sophisticated security and surveillance apparatus in human history will assert itself with a terrifying fury.

The powerful web of interlocking corporate entities is beyond our control. Our priorities are not corporate priorities. The corporate state, whose sole aim is exploitation and imperial expansion for increased profit, sinks money into research and development of weapons and state surveillance systems while it starves technologies that address global warming and renewable energy. Universities are awash in defense money but cannot find funds for environmental studies. Our bridges, roads and levees are crumbling from neglect. Our schools are overcrowded, decaying and being transformed into for-profit vocational centers. Our elderly and poor are abandoned and impoverished. Young men and women are crippled by unemployment or underemployment and debt peonage. Our for-profit health care drives the sick into bankruptcy. Our wages are being suppressed and the power of government to regulate corporations is dramatically diminished by a triad of new trade agreements—the Trans-Pacific Partnership, the Transatlantic Trade and Investment Partnership and the Trade in Services Agreement. Government utilities and services, with the implementation of the Trade in Services Agreement, will see whole departments and services, from education to the Postal Service, dismantled and privatized. Our manufacturing jobs, sent overseas, are not coming back. And a corporate media ignores the decay to perpetuate the fiction of a functioning democracy, a reviving economy and a glorious empire.

The essential component of totalitarian propaganda is artifice. The ruling elites, like celebrities, use propaganda to create false personae and a false sense of intimacy with the public.

The emotional power of this narrative is paramount. Issues do not matter. Competency and honesty do not matter. Past political stances or positions do not matter. What is important is how we are made to feel. Those who are skilled at deception succeed. Those who have not mastered the art of deception become “unreal.” Politics in totalitarian societies are entertainment. Reality, because it is complicated, messy and confusing, is banished from the world of mass entertainment. Clichés, stereotypes and uplifting messages that are comforting and self-congratulatory, along with elaborate spectacles, replace fact-based discourse.

“Entertainment was an expression of democracy, throwing off the chains of alleged cultural repression,” Neal Gabler wrote in “Life: The Movie: How Entertainment Conquered Reality.” “So too was consumption, throwing off the chains of the old production-oriented culture and allowing anyone to buy his way into his fantasy. And, in the end, both entertainment and consumption often provided the same intoxication: the sheer, endless pleasure of emancipation from reason, from responsibility, from tradition, from class and from all the other bonds that restrained the self.”

The more communities break down and poverty expands, the more anxious and frightened people will retreat into self-delusion. Those who speak the truth—whether about climate change or our system of inverted totalitarianism—will be branded as seditious and unpatriotic. They will be hated for destroying the illusion. This, as Gabler noted, is the danger of a society dominated by entertainment. Such a society, he wrote, “… took dead aim at the intellectuals’ most cherished values. That theme was the triumph of the senses over the mind, of emotion over reason, of chaos over order, or the id over the superego. … Entertainment was Plato’s worst nightmare. It deposed the rational and enthroned the sensational and in so doing deposed the intellectual minority and enthroned the unrefined majority.”

Despair, powerlessness and hopelessness diminish the emotional and intellectual resilience needed to confront reality. Those cast aside cling to the entertaining forms of self-delusion offered by the ruling elites. This segment of the population is easily mobilized to “purge” the nation of dissenters and human “contaminants.” Totalitarian systems, including our own, never lack for willing executioners.

Many people, maybe even most people, will not wake up. Those rebels who rise up to try to wrest back power from despotic forces will endure not only the violence of the state, but the hatred and vigilante violence meted out by the self-deluded victims of exploitation. The systems of propaganda will relentlessly demonize those who resist, along with Muslims, undocumented workers, environmentalists, African-Americans, homosexuals, feminists, intellectuals and artists. The utopia will arrive, the state systems of propaganda will assure its followers, once those who obstruct or poison it are removed. Donald Trump is following this script.

The German psychoanalyst and sociologist Erich Fromm in his book “Escape From Freedom” explained the yearning of those who are rendered insignificant to “surrender their freedom.” Totalitarian systems, he pointed out, function like messianic religious cults.

“The frightened individual,” Fromm wrote, “seeks for somebody or something to tie his self to; he cannot bear to be his own individual self any longer, and he tries frantically to get rid of it and to feel security again by the elimination of this burden: the self.”

This is the world we live in. The totalitarian systems of the past used different symbols, different iconography and different fears. They rose up out of a different historical context. But they too demonized the weak and persecuted the strong. They too promised the dispossessed that by subsuming their selves into that of demagogues, or parties or other organizations that promised unrivaled power, they would become powerful. It never works. The growing frustration, the ongoing powerlessness, the mounting repression, leads these betrayed individuals to lash out violently, first at the weak and the demonized, and then at those among them who lack sufficient ideological purity. There is, in the end, an orgy of self-immolation. The death instinct, as Sigmund Freud understood, has a seductive allure.

History may not repeat itself. But it echoes itself. Human nature, after all, is constant. We will react no differently from those who went before us. This should not dissuade us from resisting, but the struggle will be long and difficult. Before it is over there will be blood in the streets.