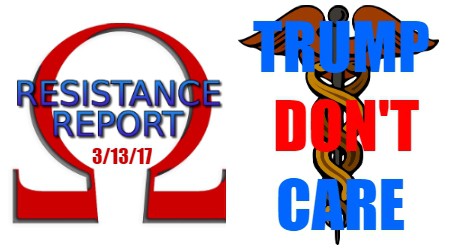 The Congresssional Budget Office — a bipartisan research arm of the Congress — has released its highly anticipate analysis of the Republican plan to replace Obamacare. To absolutely no one’s surprise, the CBO report shows that Trump and the Republicans have been lying through their teeth.

Dylan Matthews, Vox: The GOP health plan is an act of class warfare by the rich against the poor

The Congressional Budget Office’s assessment of Republicans’ plan to replace Obamacare is a description of one of the largest, most significant income redistribution programs the US government has ever considered — from the poor to the wealthy rather than the other way around.

It’s even worse than anyone had expected. On Monday, the Congressional Budget Office released its report analyzing the GOP’s plan to repeal and replace Obamacare, and it offers a bleak picture for the future of access to health insurance for the country.

Anyone who believed GOP promises that people would still have health insurance under the Republican repeal plan now know that they were lied to; they are going to be left out in the cold.

The reality is that the GOP bill is not a health care plan. It’s a $275 billion tax break for the wealthiest Americans. It must be defeated.