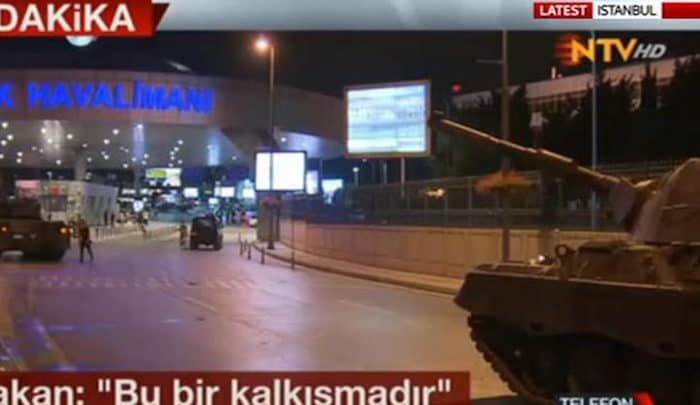 The survival of Turkish President Recep Tayyip Erdogan and his ruling Justice and Welfare Party of an attempted coup last week is a mixed blessing.

Despite the ultra-conservative policies and creeping authoritarianism of the Erdogan regime, Turks from across the political spectrum opposed the coup, which was attempted by a faction of the Turkish military.

As the putschists were claiming they had seized state power, Erdogan—instead of calling for armed resistance—used FaceTime to appeal to the nation: “I urge the Turkish people to convene at public squares and airports. There is no power higher than the power of the people.”

In response, hundreds of thousands of supporters took to the streets and faced down the putschists, despite scores of unarmed protesters being killed by tanks, attack helicopters, and snipers.

The good news is that the coup’s failure may be a sign that, for the first time in history, Turkey’s elected government has successfully imposed civilian rule over the military. Having experienced military rule a number of times in recent history, the Turkish public recognized a military regime would probably be even worse. They also saw what happened in Egypt, where liberal democrats initially cheered the military coup against Morsi and the Muslim Brotherhood only to find themselves under a brutal military dictatorship.

Turks’ resistance to the coup demonstrates that the Turkish military no longer has the overbearing role it had for so many decades, effectively exercising veto power from behind the scenes. On four previous occasions, they easily seizedpower from democratically elected governments.

The bad news is that the apparent success in resisting the military may not be used for democratic ends.

Indeed, Erdogan and his AKP is already using the coup attempt as an excuse to crack down even harder on dissent. In just a matter of hours, Turkish president Erdogan ordered the jailing of more than 6,000 people, including 2,745 judges and prosecutors, for allegedly supporting the coup attempt. Meanwhile, the Interior Ministry has fired close to 9,000 people across country, including thirty governors.

Observers seriously doubt that a government not known for its efficiency could have carried out any credible investigations with such speed. There is little doubt Erdogan is using this as an excuse to consolidate his rule and eliminate checks on his power.

Turkey’s coup was largely defeated by massive nonviolent resistance, adding to a list of countries where military putschists have been overwhelmed by people power: Germany (1923), France (1962), Bolivia (1979), Argentina (1987), Russia (1991), Haiti (1992), Thailand (1992), Venezuela (2002) and Burkina Faso (2015). Just because the military may take over government buildings and proclaim itself in charge doesn’t mean people will recognize its authority or agree to cooperate.

But it was not exclusively nonviolent resistance. Pro-Erdogan thugs beat and even lynched soldiers suspected of supporting the coup and there are increasing reports of vendettas carried out by pro-AKP mobs.

It’s also unfortunate that this impressive show of civil resistance in the face of an illegitimate military coup was done to defend a reactionary government. But the fact that a leader targeted by a coup would recognize that civil resistance would be the key to his government’s survival is yet another indication of the growing awareness that power does not just come from the barrel of a gun.

There is no evidence to suggest that the United States supported the coup attempt, despite accusations by some Turkish officials. Charges that the moderate U.S.-based Turkish Islamic cleric Fethullah Gulen was behind the coup are murky at best. After initially simply calling for both sides to show restraint, the Obama administration joined the rest of the international community in denouncing the coup.

The U.S. has strongly supported the Turkish military on the four previous occasions when it has seized power. This included the martial law period during the 1980s during which thousands of civilians were killed and tens of thousands of nonviolent dissidents were jailed (at the same time the Reagan administration, ironically, was leading international efforts to sanction Poland for a far less-violent martial law.)

In 2003, the Turkish parliament refused to let the country be used as a launching pad for the U.S. invasion of Iraq. Deputy Defense Secretary Paul Wolfowitz said he was “disappointed” that the Turkish military “did not play the strong leadership role on that issue that we would have expected.”

At least the Obama administration recognized that having the United States support a military coup against a democratically elected and still fairly popular government—particularly given the history of U.S. support for coups and regime change in the region—would likely sow instability rather than order.

It would be even better if the United States were to withhold military assistance and other support unless the Erdogan government ceases its repression against nonviolent and democratic opponents.