The Gates Foundation vs. the World Social Forum: A Tale of Two Meetings 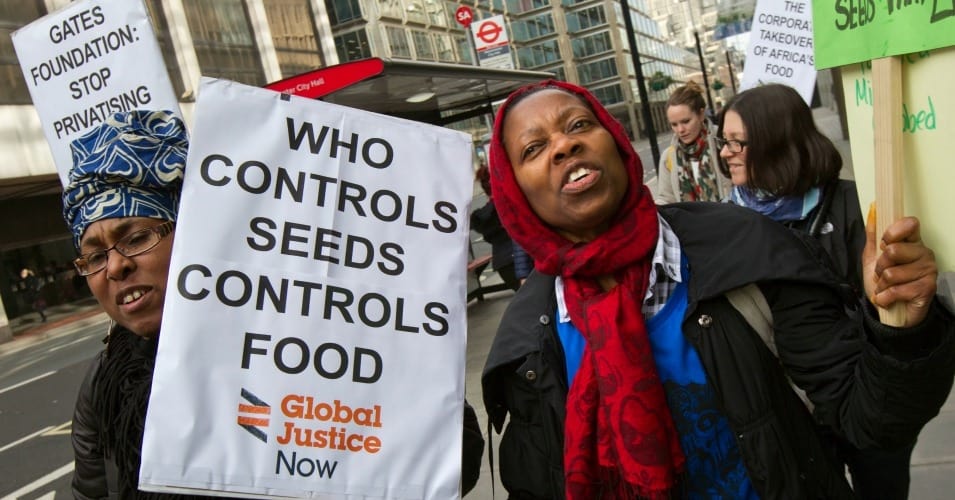 This week the Bill and Melinda Gates Foundation and USAID hosted a meeting in London with big agribusinesses to discuss strategies to increase corporate control over seeds in Africa. The location of the meeting was secret. So was the agenda. Attendance was strictly invite-only and nobody who even came close to representing African small farmers was invited.

Meanwhile farmers and food sovereignty activists met at the World Social Forum in Tunis, Tunisia to discuss their solutions to the problems of our food system. These two meetings represent not just two different types of meeting – a closed, secretive meeting of the powerful versus an open, democratic meeting of grassroots activists – but also two radically different paths for the future of our food. One is based on corporate control and would generate vast profits for a small elite; the second is centred on sustainable, democratic, local food production.

As often was the case in colonial times the corporate agenda in Africa is today often disguised as paternalistic benevolence. Friendly-sounding projects such as the Alliance for the Green Revolution in Africa, backed by the Bill and Melinda Gates Foundation, and the DfID-supported New Alliance for Food Security and Nutrition promise to eliminate hunger by creating the conditions that will bring new corporate technologies and more big business investment to African agriculture.

On the face of it that all sounds very good. So why this level of secrecy for the meetings about the projects? Samwel Messiak, a Tanzanian food campaigner I met in Tunis tells a very different story of the corporate agenda for Africa’s food. He told me that in Tanzania the New Alliance has helped corporations “buy” land off local communities without their consent and without paying them compensation for their lost land.

This is because the corporate agenda of AGRA and the New Alliance threaten to move control of land and seeds into corporate hands. The push for corporate engagement in Africa’s agriculture also has a strong focus on producing cash crops for consumption in richer parts of the world (a practice started in colonial times) which if anything provides less food for people living locally. It seems strange that a supposedly charitable organisation such as the Gates Foundation is involved in this agenda; it seems they have swallowed the idea that only the market can provide for our needs.

In a very different setting from the corporate meeting in London, an alternative vision for our food is forming. In a packed room at the World Social Forum in Tunis, farmers and food sovereignty campaigners discussed a radically different food system.

Farmers and campaigners from across the world shared examples of how agriculture can provide livelihoods for farmers, food for local communities and can be a central part of women’s liberation as women are taking a leading part in food production in most places. There is powerful evidence that organic farming practices and local seeds used by small-holder farmers are able to produce more food on less land and with less water than industrial agriculture.

Agribusinesses are putting small-scale farmer under pressure everywhere. But representatives from places like Chile, Senegal, Bangladesh and Italy told the meeting how farmers are showing how local communities can take back control of their food systems to provide healthy and affordable food. It was inspiring to experience how unified farmers and campaigners from different places are in their fight for democratic control of our food. As we chanted at the end of the meeting: “The people united will never be defeated”.

In 2015 it shouldn’t be a radical notion to want to move beyond colonialism and make sure farmers can keep control of the resources needed to grow food to feed their communities. So it is more important than ever that we stand with small farmers across the world to defend their right control their own land and their own seeds and our right to healthy local food.

Morten Thaysen works in Global Justice Now‘s communications team and is an activist with Fuel Poverty Action and Reclaim the Power. Follow him on Twitter: @viabank