The Fight Over Obamacare Was a Giant Political Charade 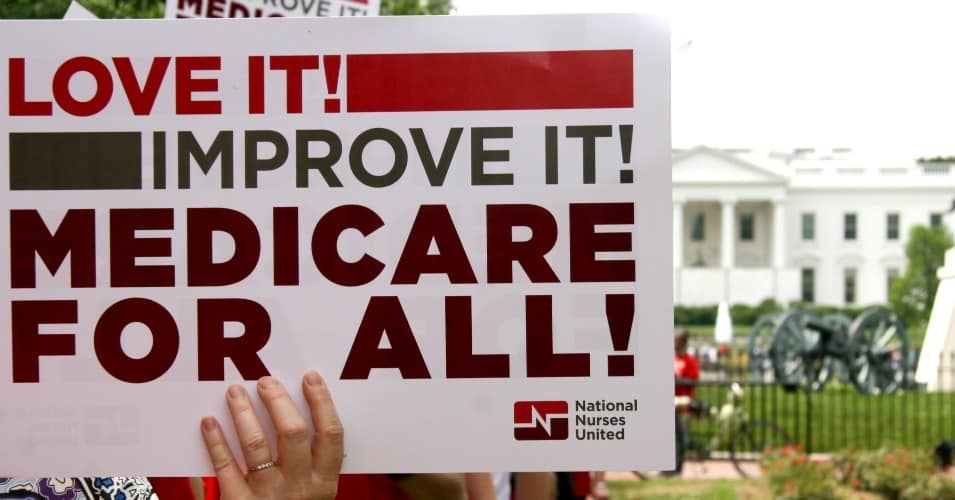 When the U.S. Supreme Court ruled on June 25 that the Affordable Care Act’s (ACA) subsidies for health insurance for the poor were indeed constitutional, liberals cheered. The last-ditch attempt by the right to gut President Obama’s signature act failed. In hisweekly address, Obama triumphantly announced that “after more than fifty votes in Congress to repeal or weaken this law; after a Presidential election based in part on preserving or repealing this law; after multiple challenges to this law before the Supreme Court, we can now say this for certain: the Affordable Care Act still stands, it is working, and it is here to stay.”

The case at the heart of the ruling was King v. Burwell, a legal challenge that was based on a technicality. The Los Angeles Times explained that legal experts saw it “as a fatuous misreading of the law and a tortured effort to bend the process of statutory interpretation for ideological ends.” But the constant attacks on the ACA, including this last attempt, were less ideological than political, and in the end, the Supreme Court ruling was an affirmation of the supremacy of capitalism over human needs.

It is true that 6.4 million Americans currently receiving subsidies for insurance would have lost their coverage had the court not voted to preserve the ACA. The vote was 6-3, with conservative Chief Justice John Roberts joining swing voter Anthony Kennedy and the four liberal stalwarts (Sonia Sotomayor, Elena Kagan, Ruth Bader Ginsburg, and Stephen Breyer). The fact that Roberts voted for it, and wrote the majority opinion, speaks volumes about what the ruling really means. According to him, “Congress passed the Affordable Care Act to improve health insurance markets, not to destroy them.”

That single sentence clearly lays out the problem with what the right has sardonically named “Obamacare.” In voting to preserve the health care reform law, the court sought to “improve health insurance markets,” not access to health care.

Paul Y. Song is the executive chairman of the Courage Campaign, executive board member of Physicians for a National Health Program, and co-chair of Campaign for a Healthy California. He told me in an interview on Uprising that “this was really less about protecting patients and more about protecting the health insurance industry, hospitals and all of the medical corporations.” The subsidies at stake are our tax dollars filling the coffers of private corporations in exchange for profit-based “managed care.”

Song concurred, saying, “This is less of a government-run program, but it’s a corporate bailout. It really is giving people money to buy a product from a for-profit industry that only makes money by denying care.”

The right-wing attacks on Obamacare were always about attempting to delegitimize the president rather than the actual substance of a pro-corporate health reform law. Indeed, Republicans long ago suggested similar reform proposals, such as the health exchanges, to those at the heart of the ACA. “Had anyone else proposed this,” said Song, “I think the Republicans would have said, ‘Wow this is a great idea.’”

The GOP’s relentless attacks on the ACA left progressives in the awkward position of having spent the last five years defending a pro-corporate law that the right would have ordinarily salivated over. As Michael Moore wrote in the New York Times, “Obamacare is awful. That is the dirty little secret many liberals have avoided saying out loud for fear of aiding the president’s enemies.”

When the Supreme Court ruled to preserve the ACA, privately some Republicans expressed relief, knowing that if 6.4 million Americans relying on subsidies had suddenly lost them, the GOP would have paid a stiff political price.

The act of opposing the law at any cost has given Republicans legitimacy among their right-wing supporters for targeting Obama while ultimately getting what they want, which is a pro-corporate law. For Democrats, supporting Obamacare has given them the appearance of caring about medical bankruptcies and the plight of the uninsured. And Obama has won by achieving the seemingly impossible task of passing health care reform, while also propping up private industry. In the end, the fight over the ACA has resulted in wins for the Republican Party, the Democratic Party, the health insurance industry and the president.

Among the losers are Americans who remain dependent on their employers for health insurance, and those who have bought plans from the ACA’s exchanges but pay through the nose for minimal coverage. Even plans available to those who used to be denied them because of pre-existing conditions are expensive and the deductibles extremely high.

Most unfortunate of all are the nearly 13 percent of Americans who remain uninsured. Song pointed out that “the one thing that Democrats and Republicans could agree on was to exclude our undocumented brothers and sisters.” It’s no surprise that Latinos are among the least insured communities in the nation.

Compared with the lack of regulations that the health insurance industry used to enjoy, Obamacare has imposed some minimal limits. But in the end, it leaves companies stronger than ever, as evidenced by the buoyancy of insurance stocks in the aftermath of the Supreme Court ruling.

In other words, Obamacare is a win for the 1 percent, and a loss for the rest of us.

Our health care system places an entirely needless middleman between us and our doctors, whose sole function is to vacuum up as many dollars as possible in the interest of capital enterprise. But if our interest is health care, a simpler equation is in order. It goes by the innocuous name of “single-payer health care,” and it takes the elegant form of “tax dollars in, health care out.“

Given the long-drawn-out fight Obama had over a pro-corporate law secretly favored by Republicans, he might have been better off expending his energy on passing a Medicare-for-all bill.

Thankfully, Obamacare’s provision allowing states to design their own health care systems starting in 2017 could result in state-by-state adoptions of single-payer systems. California has twice passed legislation that would have established a single-payer system, only to be vetoed by Republican Gov. Arnold Schwarzenegger in 2006 and 2009. Activists like Song are determined to build momentum toward that end in the next two years.

Those words ring true: Obamacare is not good enough to pass to the next generation. It’s time to build something much better.