The eyes of the world are trained on Israel. But will there be anything to see?

And don’t forget Iran, about which our hero will tell every Israeli that “all options are on the table”. And why on “the table”, for God’s sake? Surely the options are in bunkers. 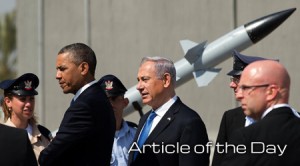 So will it be tragedy, farce or tourism? Obama’s a tourist, so says the Davy Crockett of the American journalistic frontier and philosopher king of The New York Times (aka T Friedman, Esq), but he’s wrong. The winner of the Nobel Prize for Public Speech-making will be at least a super-tourist – with 10,000 armed Israeli and American tour guides in Jerusalem alone. Now that, Mr President, is the wall. No, not That Wall, we’re talking about the Ottoman palisade on each side of the city’s Damascus Gate.

But of course, if he’s really going to head for the Holy Manger, Obama will have to glance – will he not? – at the real wall (aka “security fence/barrier”). True, Berlusconi claimed he didn’t see it, even if Mussolini would at least have noticed its fascist dimensions. But there you go, the “outreach” president is meant to be “engaging” people, young people. Over the heads of their masters will he speaketh unto youth. Only the youth of the Israeli and Palestinian variety don’t seem to put a lot of trust in the bloke.

But you’ve got to feel sorry for Obama. What other statesman would prelude a trip to Israel by collecting leaders of America’s Jewish community and promising – really insisting – there would be no big initiatives to worry about?

We all remember the Humiliation of Saint Barack? When he went on about the 1967 border in the White House last year and Netanyahu cut him short and told him to forget about it and Obama just sat there, as mimsy as a borogrove, crushed by the Smiter Benjamin. No more talk, then, of 1967 borders or UN Security Council Resolution 242. Anyway Obama’s been taking advice from the adviser who’s turned out to be the biggest failure in US foreign policy since Joseph Kennedy, the much-acclaimed, utterly hopeless Dennis Ross.

We’ll have to tolerate the usual clichés, of course, either from Saint Barack or his press toads. That infamous peace process must once more be put “back on track”, or maybe we’ll have to hear about the “road-map” – which presumably can’t be put “back on track” since trains don’t run on tarmac. And don’t forget Iran, about which our hero will tell every Israeli that “all options are on the table”. And why on “the table”, for God’s sake? Surely the options are in bunkers, perhaps even in the unmentionable, unprovable, unspeakable silos in which the Smiter Benjamin keeps upwards of 250 nuclear missiles. But then, we’ll be reminded of all the Macbeths littered around the region; not the head-chopper of Riyadh, of course, because he’s our mate, but certainly the crackpot of Tehran, the owlish Morsi, that chap in the presidential palace in Damascus and all those Salafist Calibans – or is that Talibans? – waiting to destroy Western civilisation (to which Israel belongs, does it not?)

Oh yes, it’s going to be a fine old ding-dong if Obama doesn’t watch out. The Israelis have hidden the Palestinians away behind That Wall; and the only real historical Palestinian leader (forget Abbas) whom Obama will see will be the old Grand Mufti, sitting with Hitler in the photo at the Yad Vashem Holocaust memorial, al-Husseini contaminating every Palestinian with Nazism to the end of time.

Will Blair appear? Please God, no. There is enough of Christ’s blood streaming in the Middle Eastern without Dr Faustus showing up. But it does make you wonder if anyone will dare to point out that one group – the Palestinians – are being occupied by another – the Israelis – who are unconditionally supported by another group, namely Saint Barack and his merry men. Maybe he wants to drop the “peace process” thing and make a run for it. The redeployment of US foreign policy. Like Napoleon’s redeployment from Moscow, or the British redeployment from Dunkirk. Makes you feel sorry for the Palestinians, doesn’t it? And the Israelis, too.