The Evil That Dare Not Speak Its Name: Israel’s Apartheid 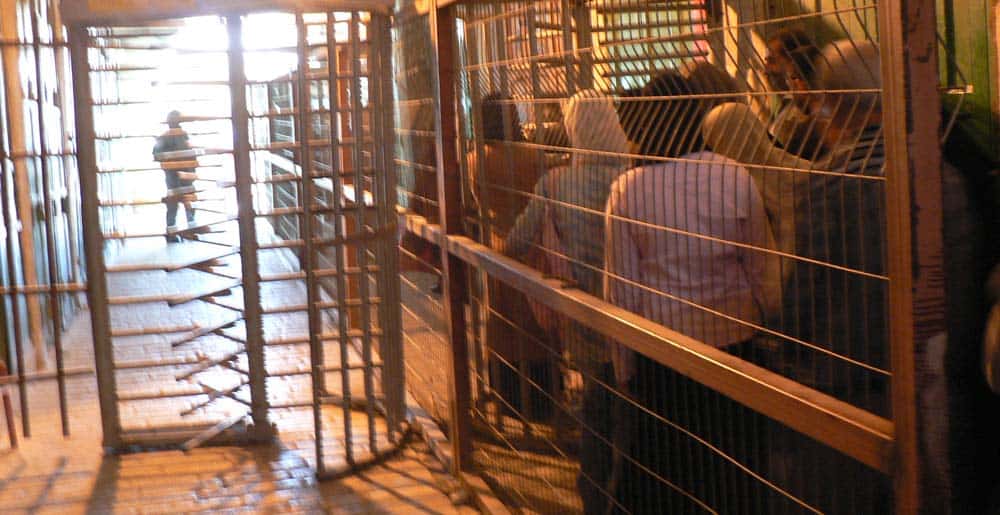 For years the “A-word” has been off-limits in polite conversation about Israel’s treatment of Palestinians. The A-word, we have been told, unfairly singles out the Jewish state and its use is perhaps even anti-Semitic. Such declarations can have a powerful silencing effect.

However, in 2002 Archbishop Desmond Tutu broke the taboo, writing in the British newspaper The Guardian that “the humiliation of Palestinians at checkpoints and roadblocks” reminded him “of what happened to us black people in South Africa.”

Four years later Jimmy Carter committed a similar indelicacy with the very title of his bestseller, “Palestine: Peace Not Apartheid.” A wave of condemnationof the former president followed. “He appears to be giving aid and comfortto the new anti-Semites,” wrote a reviewer for the Jewish Virtual Library.

For the most part, in the mainstream U.S. press at least, the decorum that forbids use of the A-word remains in place. Yet increasingly, as Israel continues to colonize the West Bank with settlers, and its army ensures their dominion over the lands they occupy, adhering to the A-word ban requires shielding one’s eyes, or, at a minimum, engaging in verbal gymnastics. What, after all, to call a system of legalized discrimination based on ethnicity and religion in which one group has full voting rights and the other does not? What to call a system under which one people can travel freely on roads built specifically for them, whisking through checkpoints because of their religion and thecolor of their license plates, and under which the other must submit to inspection at military kiosks frequently manned by snipers? A system under which one population in hilltop enclaves is protected by troops and military surveillance towers, while the other is subjected to frequent night raids by those same troops? Under which 40 percent of the adult malepopulation has been forced to spend time in prison? Under which one group’s “civil administration” can designate a town of the other group as a historic archeological site andevict all the residents, who then must move into tents? Under which soldiers ordered Palestinian bathers outof a public swimming pool last spring so Jewish settlers could have a swim, alone and unbothered by the darker-skinned native population?

Here’s what I found on a trip I made to the West Bank recently.

I and my Palestinian host left Jerusalem on a hot, dry morning, our access to the exclusive West Bank roads ensured by the precious yellow license plate of our vehicle. H. was aware that because of his origin he could be banned from the roads at any time.

Our destination was the old city of Hebron, one of the most surreal tableaus of the entire tragedy of Palestine and Israel, where 500 to 600 Jewish settlers, many of them from the United States, are protected by at least 1,500 soldiers in a city of 170,000 Palestinians.

I looked out the open window to the east, feeling immediately the profound changes that had occurred in the landscape in the two years I’d been away. The red-roofed Jewish settlement of Efrat now stretched for nearly two miles. Adjacent were rows of white trailers, part of an “outpost” that Israel deems technically illegalbut which, by Israel’s design, will soon be absorbed into the settlement. Israeli leaders call settlement expansion “natural growth”; this is how a Palestinian landscape is transformed into a Jewish one. The population of Efrat is officially about 10,000, though H. claims the real number is more than twice that.

In the distance, the 25-foot-high separation barriermarched south with us, and now, suddenly, at a narrow passage it reached us, transformed into a tastefully etched boundary of beige and tan. Settlers, H. told me, had complained that they found the ugly gray slabs distasteful as they commuted to prayer in Jerusalem or to the beach in Tel Aviv; now, with the wall’s offensive aspects eliminated for the privileged population, the separation of peoples carries the deceiving look of a simple sound barrier.

Presently the road opened up again, and for a lovely, fleeting moment the landscape of Palestine appeared, unimpeded by barriers, settlements or checkpoints. Ancient terraced olive groves dotted the landscape, interspersed by vineyards of Hebron grapes, nearly ready. The cries of “Khalili ya anab,”H. told me, would soon ring out in the markets across Palestine: “The Hebron grapes are here!”

Few vendors were calling out 30 minutes later as we walked through the moribund Old City of Hebron, where urban settlement blocks stand brick to brick with Palestinian homes in a contorted geographical designation known as H-2. This arrangement was sanctioned by the international community in an agreement signed by the Palestinian Authorityas part of the Oslo “peace process.” Israel had insisted that a few hundred settlers be allowed to stay in a neighborhood of tens of thousands of Palestinians because of a long Jewish presence there. The current settlers say they live in Hebron to honor the memory of Jews massacred there by Palestinians in 1929, during riots over Jewish immigration to Palestine. Yet the current settlers, among the most extremist of all Israelis, have little or no connection to the descendants of those massacred. Some of the descendants have denounced the Hebron settlements, pointing out that some Palestinian families sheltered Jews in the massacre; they call for removal of the settlers.

Today, the 1,500 Israeli soldiers, more than twice the number of settlers they were sent to protect, spend much of their time escorting their charges from one part of the city to another. When the armed escort squads push through the narrow alleys of Old Hebron, life on the Palestinian street freezes; such is the primacy of Israel’s settlement project. Steel screens above the old Arab casbahprotect the Palestinian vendors against a stream of trash, bottles, plastic chairs and bags of feces that the settlers hurl down from above. This is everyday life.

We walked toward Shuhada Street, the once-bustling main street of Palestinian life. H. stopped; as a Palestinian, he is not allowed to walk there. The street was nearly vacant. The doors on some of the shops were welded shut; access to some homes is now possible only by ladder, or, in one case, a rope to a window.

We came upon one of H-2’s 120 military checkpoints and other obstacles ensuring separation between Arab and Jew. As we paused, 50 meters away a soldier’s voice called out from a loudspeaker, imitating the call to prayer. “Allahu akbar,” he sang in accented Arabic. His mocking laughter followed.

Around the bend, away from the checkpoint, stood a Palestinian elementary school, its entire perimeter marked with looping razor wire. Many of the children must cross checkpoints to get to the school, walking past graffiti in English saying “Gas the Arabs!” and sometimes enduring a gantlet of flying stones and rotten vegetables and attacks from settlers’ dogs. Across from the school lies a flat expanse of asphalt. Once this was a play area for the school. The old soccer and volleyball grounds have been replaced by a parking lot for buses from the settlements.

It was from an adjacent settlement, Kiryat Arba, in 1994 that a settler from Brooklyn named Baruch Goldstein emerged, traveling with his Galil automatic rifle to the Ibrahimi Mosque and somehow getting through Israeli security before gunning down 29 Palestinians as they prayed. Survivors beat him to death. Today Goldstein is revered among some settlers. At his gravesite in Kiryat Arba, these words are inscribed: “He gave his soul for the people of Israel, the Torah, and the Land. His hands are clean and his heart good. …”

We headed to the Ibrahimi Mosque, also known as the Cave of the Patriarchs. Near the entrance we passed through a pair of metal floor-to-ceiling turnstiles and submitted ourselves for inspection by Israeli soldiers, as does every Palestinian who wishes to worship there.

The call to prayer from this mosque, H. told me, is often banned by the Israeli authorities, who say it bothers the settlers. In December, for example, the call was banned 52 times; in May, 49 times, or about one-third of calls. “Just a humiliation,” H. said. “Showing their power.” Sixty percent of the mosque has been taken over by Israel and is now a synagogue.

At the entrance we took off our shoes. Just inside lay a mound of plastic throw rugs—seemingly redundant, as plush Turkish carpets cover the interior of the mosque. But they are essential, H. told me. If a member of the Israeli government, or its legislative body, the Knesset, wishes to visit, he or she can enter the Muslim side with only a brief warning. Such visitors refuse to remove their shoes, so the Muslim faithful line their path with the plastic rugs, preserving the sanctity of their religious space.

Here, it is believed, lie the remains of Abraham (Ibrahim) and Sarah, figures central to both Judaism and Islam. The tomb of Abraham/Ibrahim is visible to each segregated side. Peering past the tomb, I could see a woman on the synagogue side peering back at us.

We emerged into the harsh midday light outside the mosque. Inside or out, the overriding feeling was about imbalance of power: that officials would refuse to remove their shoes in someone else’s holy place; that metal screens are needed to protect shopkeepers from debris hurled in hatred; that someone, somewhere, would actually decide to close a playground for Palestinian children in order to put in a parking lot for the buses of Jewish settlers.

Power in Hebron, as it does across the West Bank, lies most clearly in the hands of Israel; Palestinians are no match for Israel’s military might or its political influence with the United States, the world’s sole superpower. Palestinian power lies instead in sumud, or steadfastness: a determination to persevere and to live for a better day, confronting Israel on moral grounds while hoping the world will one day bear greater witness to the facts on the ground.

As if to underscore this point, near the end of our trip to Hebron, H. gestured to a small neighborhood near the mosque, on the other side of yet another entrance controlled by soldiers and armed with metal detectors. Just beyond live six Palestinian families on a tiny island of territory amid the patchwork jurisdictions of H-2. They live essentially surrounded by settlements and the military, and because of that proximity any items that could be construed as weapons—including kitchen knives—have been banished from their homes by Israeli authorities. The Palestinian residents must have their meat cut in the market, to be brought back in pieces. “For how long [is one] able to live under these shitty conditions?” H. asked. Israel, he said, wants to force the families out—“what we call slow transfer.” But for now, the families’ sumud is intact. They remain steadfast. “Existence,” declares a popular Palestinian slogan, “is resistance.”

But the system in which they exist cannot stand in the long run. And although some commentators and others, even after looking at the facts, may continue to decry the use of the A-word—A for Apartheid—to me it matters little what we call it. I am also fine with comparing these conditions, and others like them all over Palestine, to the legislated racism and racial violence that were known in America as Jim Crow.

Whatever we call it, it is separate and unequal. And like apartheid, like Jim Crow, it is destined for the dustbin of history.