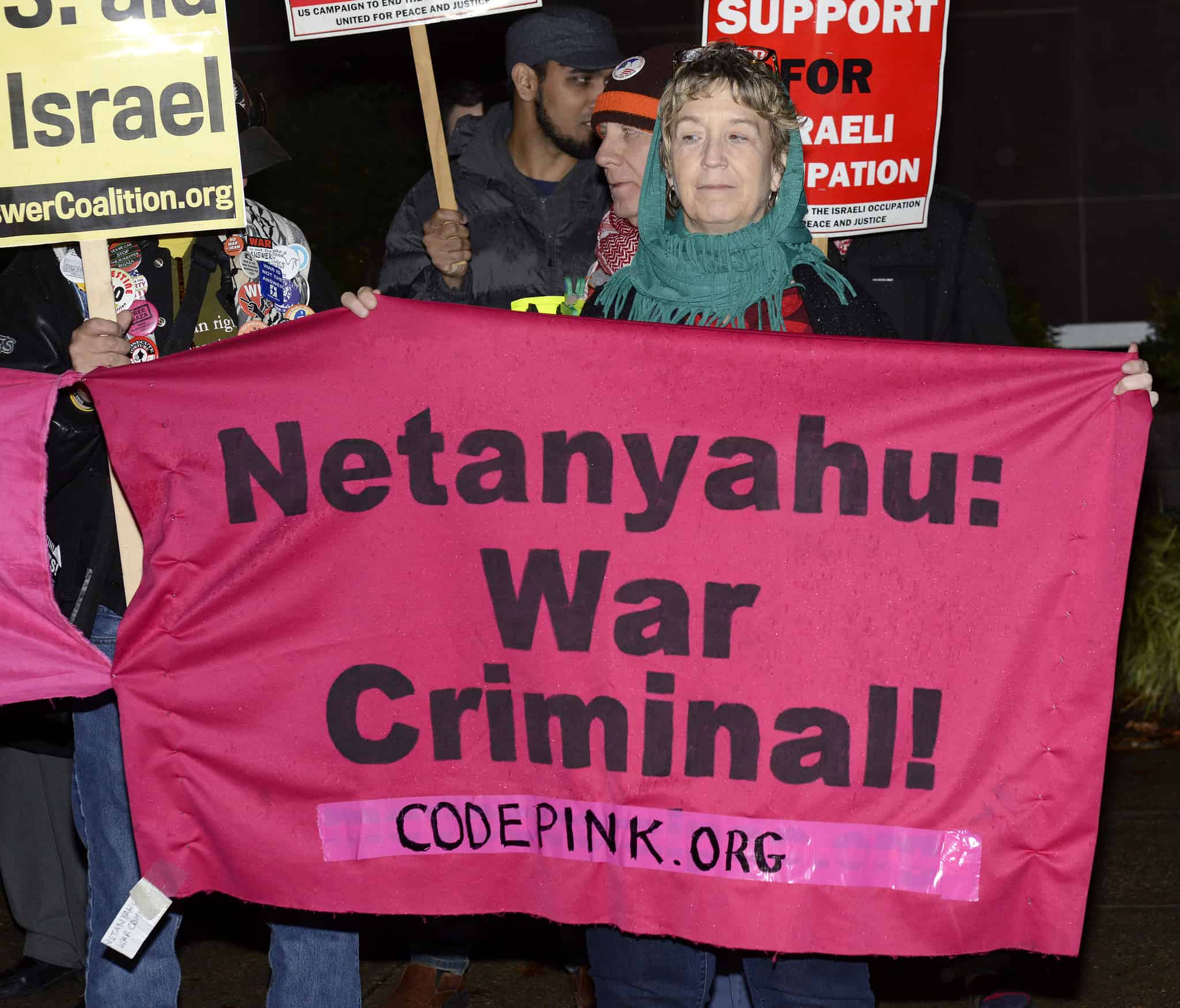 The Israeli journalist and TV producer Avi Issacharoff looked around our Tel Aviv meeting room and sighed. “The reality is so complex to understand, it’s so difficult, that for someone who comes from abroad, it’s Mission Impossible,” he said.

I was someone from abroad, he was describing his homeland, and although it was my second time in this country, I already was wrestling once again with its impossibilities.

“Even for journalists coming from abroad who are staying here in Israel, living here,” Issacharoff continued, “it takes years and years in order to get what is going on around here.

“You need to show the complexity of the conflict. There are no blacks and whites here. Only different shades of gray.” He joked ruefully, “Maybe even more than fifty.”

Our trip to Israel and Jordan had been in the works for a year. For the first week, I was going for a meeting of the International Affiliation of Writers Guilds, hosted by the Scriptwriters Guild of Israel. Who knew back when we planned it that we’d arrive in the middle of an escalation of violent confrontations between Palestinians and Israelis that many feared would turn into a third intifada?

As we flew into Tel Aviv last month, this new Palestinian uprising against Israel’s occupation of the West Bank and Gaza had been in full swing for more than a week, but unlike past revolts, primarily this was a series of random stabbings by frustrated, angry Palestinian youth, mostly young men but some women, too, urged on in part by social media. Many of these turned into suicide missions as the assailants were gunned down within moments by authorities or in some cases, civilians.

(In one tragic case, an innocent Eritrean refugee was shot by a private security guard when he was mistaken as an accomplice to a Bedouin Arab who had opened fire in a Beersheba bus station, killing an Israeli soldier and wounding several other bystanders. While a few tried to protect him, the refugee was kicked and beaten by an angry mob and died the next day.)

There have been other incidents, too: shootings on buses and trains, cars ramming into pedestrians, stone throwing and daily demonstrations that were met with massive displays of force by police and military using concrete road barriers, rubber bullets (or worse), tear gas, and the spraying of an especially putrid substance called “skunk water.”

At this writing, according to Reuters, “Seventy-six Palestinians have been shot dead by Israeli security forces, including 44 people Israeli police said were carrying out or about to carry out attacks.” Twelve Israelis have been stabbed, shot or “killed in vehicle attacks.”

In Tel Aviv, much of the time this seemed a world away. Here were bright, hot sunny days overlooking the blue Mediterranean with luxury yachts in the distance and windsurfers scudding near the shore. Sure, at the big, downtown shopping mall, security guards lightly wanded us with handheld metal detectors and made bad jokes about detonators and bombs in my girlfriend Pat’s small backpack. But if it wasn’t for CNN and newspaper reports you’d hardly know that just a few miles away, Palestinians and Israelis were dying in the streets.

Unlike my first trip to Israel eleven years and a half years ago, when I stayed for two weeks in East Jerusalem and the West Bank without incident and in the company of some extraordinary activists, this time, friends and colleagues warned us to cancel planned trips to Jerusalem and Bethlehem. One mourned, “I feel as if I’m in ancient Greece sliding into the Dark Ages.” And when I phoned a prominent Israeli writer and peace advocate to ask for an interview he graciously but firmly declined. “I’ve been shouting about this for thirty years,” he said, “and nothing ever changes.”

Ostensibly, the immediate alleged cause for this latest strife is in Jerusalem’s Old City – the site Muslims call the Al-Aqsa mosque or the Noble Sanctuary and Jews call the Temple Mount. Since the late 12th century, all have been allowed to enter this place that is holy to both religions but only Muslims may pray there. Israeli Prime Minister Benjamin Netanyahu has pledged to maintain this so-called status quo, but the Waqf, the Islamic trust that administers the mosque believes, Reuters reports, “Israel has been slowly chipping away at the rules, with increasing numbers of religious Jews visiting the area and many of them surreptitiously praying.

“Israeli Prime Minister Benjamin Netanyahu has rejected those suggestions, saying repeatedly that the government has not changed the rules and has no intention of doing so.”

But of course, Netanyahu is part of a bigger problem, ginning up fear and paranoia among the Israeli population to solidify his support, much as he did this past March during the nation’s elections. He insisted that not only did Palestinian Authority President Mahmoud Abbas refuse to be a partner in peace but that he was a “steady inciter” of the stabbings and other violence: “He and his Fatah partners and the official websites of the PA incite day in and day out on social networks.” This despite reports that the military and Israel’s domestic intelligence service, Shin Bet, believed that while some in the PA were stirring up trouble, Abbas was doing what he could to quell the bloodshed.

One night on CNN, Palestinian negotiator Saeb Erekat said to an interviewer that he had told the Israeli government two months ago that “a sea of blood is coming. Please, let’s work together,” but that Netanyahu was dictating, not negotiating: “He has been killing hope.”

Shortly after, Netanyahu ratcheted up the rhetoric even further, claiming that in 1941 it was then-Palestinian leader Haj Amin al-Husseini, the grand mufti of Jerusalem, who had persuaded Hitler to ignite the Holocaust, annihilating Europe’s Jews rather than deport them. Historians quickly discredited the claim.

Because it works so well for him, this disconnect between Netanyahu and reality is commonplace, as are the retractions that often follow once the damage is done (Within days, Netanyahu had backed off his mufti assertions). For example, although it was not widely mentioned in American mainstream media (except for short pieces in The Washington Post and USA Today), while we were in Israel the progressive newspaper Ha’aretz reported that the country’s Atomic Energy Commission had come out in support of the Iran nuclear deal. Netanyahu’s government, so fiercely opposed to the agreement, had no comment.

Further, as JJ Goldberg recently wrote in the American Jewish newspaper theForward, “…Voices have been raised in a most unlikely corner to insist that Palestinian hostility to Israel – including Palestinian terrorist violence – is at least partly a response to Israeli actions and policies, and not simply a deep-seated hatred of Jews. That corner is the Israel Defense Forces.

“… Two active-duty IDF generals who are among the army’s top experts on Palestinian affairs spoke out publicly to state that Palestinian violence is driven to a considerable degree by anger at Israeli actions. One of the two went a step further, warning that only a serious Israeli diplomatic re-engagement with the Palestinians will help to quell such violence over the long term.”

In February, Israeli television viewers were presented a look at the IDF and Palestinians they had never seen before. Turned down by commercial broadcasters, the TV series Fauda (Arabic for “chaos”) aired on the Yes network, a satellite channel, sort of their equivalent of HBO or Showtime. The aforementioned Avi Issacharoff, co-creator of the series with Lior Raz, was surprised to find they had a hit on their hands. Warts and all, it tells the story of an elite, undercover army unit hunting down a Hamas activist, but from both sides’ points of view. Until now, Special Forces in Israel have been regarded as “our best boys,” Issacharoff said. “But sometimes even our best boys are not very good… It’s very sad but it’s the reality of the Middle East – blood and violence over peace.” Most Israeli TV viewers, it seems, could handle the truth.

As if to emphasize Issacharoff’s words, at the end of that first week, before leaving Tel Aviv for Jordan, I sat down with Avihai Stollar, a former IDF soldier who works with Breaking the Silence, an organization of ex-military “who had served in the Occupied Territories and now strive to expose the Israeli public to the day-to-day reality of the occupation.” They collect testimonies from veterans and current IDF members.

“The bottom line of the last month,” he said, “is the bottom line of every circle of violence that we’ve had here, that Israelis and Palestinians will physically suffer as long as there is an ongoing reality of occupation… We’re living in this pressure cooker that’s constantly cooking, constantly blowing steam, but most of the time – especially when it’s not over-spilling – we, as Israelis, prefer to turn a blind eye and say that this is manageable. That’s the new discourse is Israel, that we can manage it. We don’t need to solve it as long as we can manage it. And then it spills, and then it blows up in our faces because you can’t contain it and you can’t manage injustice because that’s the way it works.”

There may be many shades of gray, but the one, big black-and-white reality is the occupation, the settlements, the infamous security wall. “Obviously, Israelis have the right to live with physical safety and not be concerned about being stabbed by a random assailant,” Stollar said. “But most of the time, and for most of us, we do have the safety, we do have the security while we deny it to the Palestinians, because the daily life of a Palestinian in the occupied territory, being subjected to an ongoing military occupation, is not the same. I know that as one of the people who perpetuated it, and I know it because that’s the way it works.

“… What gives me hope is that this is completely unsustainable because at the end of the day Israelis want to sit here in Tel Aviv in cafes, have their lattes, close their eyes really hard and imagine that they’re sitting in Rome or Paris… I think hedonistic tendencies will end the occupation.”

One night in Tel Aviv, we were taken to a club where hedonism bloomed and the Palestinian-Israeli hip-hop group System Ali performed. The ten members started playing together in 2006 at a bomb shelter in Jaffa and now rap away in peaceful coexistence in Hebrew, Arabic, Russian and English.

“Funny this is where you find the one bit of sanity,” an Israeli friend said, and danced away into the darkness.

Michael Winship is an Emmy Award-winning writer, and served as senior writer of the public television series “Moyers & Company.” He is also a senior writing fellow at the public policy and advocacy group Demos, and the president of Writers Guild of America, East.