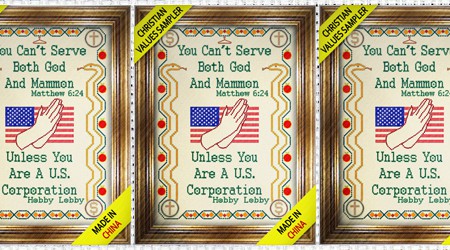 By Peter Hart
Fairness and Accuracy in Reporting

The Supreme Court decision in the Hobby Lobby case might not have been surprising, but there’s at least one aspect of the media coverage of the company that fails in a big way: Few outlets note that the company was providing the very type of health coverage it finds impossible to reconcile with its religious beliefs before the Affordable Care Act existed.

As people following the case might know, the Green family that runs the company sued over the Affordable Care Act, arguing that the law’s requirement that health plans provide contraceptive coverage violated their conservative Christian religious beliefs. Hobby Lobby and another small company were attempting to make this claim under the Religious Freedom Restoration Act, in an attempt–which proved successful–to get the Court to extend individual freedom of religion rights to corporations.

In advance of the ruling, Time (6/26/14) ran a very flattering profile of the Green family, heavy on quotes from family friends and associates, pointing out the family’s generosity (“The Greens share that prosperity like people who truly believe that the money is God’s, not theirs”) and portraying them as living in a somewhat hostile culture. Of the family meeting to discuss whether or not to sue, Time explains:

After they made their decision to sue, the Green family released this statement: “Our family is now being forced to choose between following the laws of the land that we love or maintaining the religious beliefs that have made our business successful and have supported our family and thousands of our employees and their families. We simply cannot abandon our religious beliefs to comply with this mandate.”

Under the headline “Hobby Lobby Made Fight a Matter of Christian Principle,” the New York Times report (6/30/14) portrayed the legal battle the same way:

For the family behind Hobby Lobby, fighting the Affordable Care Act’s contraceptives mandate all the way to the Supreme Court was a calling, not a choice.

But it was most certainly a choice. The idea to bring the case was not Hobby Lobby’s, but the work of the conservative Becket Fund for Religious Liberty. This is critical, because reporters ought to note that Hobby Lobby, according to its own court filing, was providing employees with contraceptive coverage it apparently concluded violated its religious beliefs. As Stephanie Mencimer ofMother Jones  (3/21/14) pointed out, Hobby Lobby says it has a problem with “the emergency contraceptive pills Plan B and Ella and intrauterine devices (IUDs), which they (erroneously) believe are abortifacients.”

The company admits in its complaint that until it considered filing the suit in 2012, its generous health insurance plan actually covered Plan B and Ella (though not IUDs). The burden of this coverage was apparently so insignificant that God, and Hobby Lobby executives, never noticed it until the mandate became a political issue.

Mencimer wrote that the case “is a mess of bad facts, political opportunism and questionable legal theories.” Coverage should point this out–especially the opportunism of a corporation that is being portrayed as waging a serious battle on behalf of its deeply held religious convictions.